A grisly ancient discovery in Ecuador has unearthed a real-world ritual practice that sounds as cold and horrific as anything in a Predator movie, and we’re still trying to get our heads around it...almost literally.

Archaeologists are reporting on their findings from a pair of 2014 and 2016 burial mound excavations at Salango, a 2,100 year-old site in coastal Ecuador, and it appears that the Guangala — the indigenous people — had some seemingly Lovecraftian ideas about stewarding the souls and bodies of their youngest dead into the afterlife.

Among the 11 Guangala corpses uncovered at the dig, a pair of infants was each discovered with its skull ritually enshrouded by a piece of “mortuary headgear” made out of…another, slightly larger, human skull, according to a new study published in the journal Latin American Antiquity. 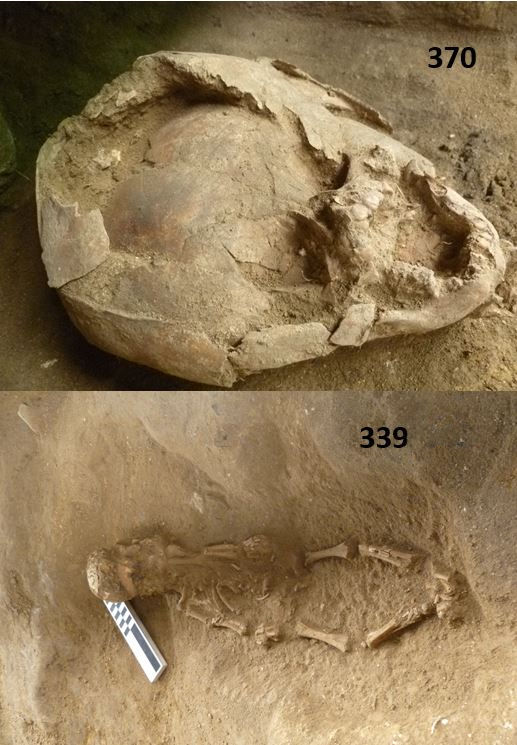 How did the mysterious culture fit one head inside the other? By scaling up — and getting out some sharp instruments to open the skull cavity so the infants’ heads could fit inside. The outer, bigger skull in each case appears to have been crafted and carved from the head of a child under the age of 12, giving the head-within-a-head totem a macabre, nesting-doll effect.

In one case, the skeletal headgear reportedly was cut in such a way that the eye sockets of the infant who “wore” it could peer out through the bigger skull’s facial opening, like an open-faced helmet. And the older children whose skulls provided the infants with their bony extra layer of afterlife protection evidently hadn’t been dead for long when their heads were culled: Each still had flesh attached at the time the Guangala snugly fit the corresponding infant’s skull inside it.

At first glance, the savage imagery of the findings project may suggest a culture of pervasive brutality and violence, but researchers say it’s more nuanced than a case of bone-shattering ritual head games.

“I would say that currently we don't have evidence of brutality with these remains. All individuals involved could have died of natural causes — which skeletal evidence points to, based on lesions associated with disease and malnutrition — and the crania were modified after death,” lead author Sara Juengst, an assistant professor of Anthropology at the University of North Carolina at Charlotte, told SYFY WIRE.

“So, while we often have an aversion to manipulating dead bodies, past cultures may not have, and we shouldn't think that's gross or savage by any means. While we cannot know the exact specifics of the Guangala belief system, so far, no evidence has presented itself that these children weren't buried with respect.”

Ideas of the afterlife may be the driving force behind the value Guangala culture placed on the bodies of the dead. Via Gizmodo, the research team reportedly speculates that the terrifying skull totems may have served as a protective barrier between the infants’ “wild” and “pre-social” souls, as their spirits made the vulnerable journey into the great unknown.

It's a fan thing
Join SYFY Insider to get access to exclusive videos and interviews, breaking news, sweepstakes, and more!
Sign Up for Free
All Posts About
News
Science
History
Science
archaeology
Related Stories