Sometimes in science stuff you take for granted is stuff you shouldn’t, and it’s just that it’s been accepted so long you don’t think about it much anymore.

Sometimes you find out it’s wrong (like, say, time is absolute, or light only acts like a wave), but sometimes someone figures out that it really was right.

That’s what happened with Alpha Centauri. It turns out the closest star system to the Sun is a triple star. Up until recently, everyone just assumed it was. But now, some astronomers have gone and shown it.

Alpha Cen (as those of us in the know call it) is a bright star appearing in the southern hemisphere skies. It only appears bright because it’s close; about 4.363 light-years away. It’s a binary star, two stars orbiting each other. One of the stars is much like the Sun (just 10% more massive and about 1.22 times its diameter), and the other is a slightly cooler star with a mass of 0.94 times the Sun’s, and about 0.86 times as wide. By convention, the brighter one is called Alpha Cen A, and the other Alpha Cen B.

Proxima Centauri is a very faint red dwarf, only .122 times the Sun’s mass, with a diameter just 0.15 of the Sun’s, too. It’s so faint it was only discovered in 1915, about two degrees (four times the width of the full Moon) away from Alpha Cen in the sky. Using parallax —a method to physically measure the distance to nearby stars— its distance has been found to be 4.24 light-years. That’s pretty close to Alpha Cen’s distance. Not only that, but using the Doppler shift in the spectrum, the stars’ velocities toward or away from the Sun can be determined, and both Alpha Cen and Proxima are headed toward us at roughly the same speeds (22.345 and 22.393 kilometers per second)*.

This is strong evidence that all three are part of the same system ... but it’s circumstantial evidence. It could be coincidence. The only way to know for sure is to find out if Proxima is actually orbiting Alpha Cen. The problem there is, if it does, that motion is sllllooooowwwww. It’s so far from the binary that it would take hundreds of thousands of years to orbit them once. How do you measure that?

But it ain’t that easy. Proxima is faint and hard to study, and there are lots of other effects you have to compensate for. For example, in a star, hot gas from the interior rises until it reaches the surface, cools, then sinks back down. That gas rises in big bubbles and sinks around the edges of the bubble, so most of the surface area of the star is actually rising gas. That means it’s heading toward you, which means it’s Doppler shifted, too. For Alpha Cen A, that shift is about 300 meters per second, a significant amount.

Another effect is gravitational redshift; as the light from a star moves outward from the surface, it loses energy due to gravity of the star. That effect also produces a Doppler-like effect, equivalent to 600 or more meters per second! That, too, needed to be taken into account. 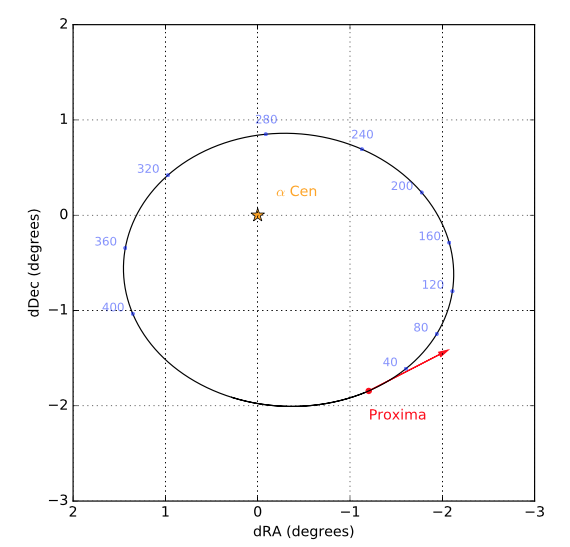 In the end, they found that, if Proxima was moving faster than 545 m/s relative to Alpha Cen, then it would be unbound, an interloper, and if it were less, it was the third member of the system.

Alpha Cen is a triple! It consists of Alpha Cen A, Alpha Cen B, and Proxima Cen. The nearest star system to us is a trinary! Cool.

With all this data in hand, they could do still more. They could calculate the orbit of Proxima, too. They found it has an orbital diameter of 2.7 trillion kilometers —a quarter of a light year across! — and it takes 590,000 years to make a single orbit. The orbit is elliptical, and the closest Proxima gets to Alpha Cen (the point in its orbit called periastron) is about 800 billion kilometers, and it reaches as far as 1.9 trillion kilometers at apastron when it’s most distant. It's nearly at apoastron now.

That’s staggering. Neptune gets 4.5 billion kilometers from the Sun, at most. The Alpha Cen system is way, way bigger than our solar system.

But there’s an interesting side note to this. Proxima has an Earth-sized planet orbiting it, discovered in 2016. It orbits the star very closely, about 7 million kilometers from it (for a while it was thought Alpha Cen A had a planet, too, but it turned out that conclusion was incorrect). Knowing that Proxima is part of the Alpha Cen system is important! If we assume all three stars formed together from the same cloud of gas and dust, then they have the same age and the same composition (so, for example, the ratio of hydrogen to iron is the same in all three). Alpha Cen is brighter and easier to observe, so the more we find out about it the more we know about Proxima, and therefore can infer about the planet, too. That’s pretty useful.

It’s funny to me that there are still some big mysteries left to unweave about the closest star to the Sun. But it’s very satisfying to be able draw a red line through one of them.

Tip o' the echelleogram to Astrobites.

* Don’t fret, they’re not headed straight at us! That speed toward us is called the radial velocity, but there’s also a sideways motion, called the tangential velocity. Together these make up the actual space velocity of the stars. It turns out they’re only roughly heading in our direction, and are sliding past us at the same time (like standing by the side of a road as a car drives by; at first it looks like it’s headed right for you, but then as it approaches you can see it’s not and will miss you). Alpha Cen will be closest to us in about 27,000 years, when it’ll be 3.25 light years away; after that the distance will start to increase as it moves away.

It's a fan thing
Join SYFY Insider to get access to exclusive videos and interviews, breaking news, sweepstakes, and more!
Sign Up for Free
All Posts About
Bad Astronomy
Proxima Centauri
Stars
alpha centauri
Related Stories

Satellite puts General Relatively to the most precise test yet

Be the stick. Some camouflage is better than others