Another brain-frying optical illusion: What color are these spheres?

A color contrast optical illusion makes it look like the balls are different colors. In reality they are all the same color and shading. Credit: David Novick, used with permission

Do you know what the difference between data and information is? Data are raw facts, like how many apples you have. Information is more complex; it’s data put into context, interpreted to give you a better understanding… like knowing you have enough apples to make a pie.

The crucial step in the metamorphosis from data to information takes place in our brains. That slab of meat in your skull takes all the data sent to it from your senses and does its best to turn it into information based on past experience. Sometimes it works (you made a pie!). Sometimes it doesn’t (you misjudged how many apples you needed).

When this all works, it appears to be seamless. But when it doesn’t, ironically we can glean information about how our brains work, and how it connects with the senses. When it comes to our eyes, one of the best ways to do this is with optical illusions. They show us just where the wiring gets crossed from external reality to our perception of it in our skulls. That’s one of the reasons I love them so.

For example, you might think what you see is what you get, especially with colors. Colors exist objectively, and so when you see something that’s red, why then, it’s red.

Yeah, no. This is extremely easy to prove, too. Behold.

A color contrast optical illusion makes it look like the balls are different colors. In reality they are all the same color and shading. Credit: David Novick, used with permission

Those of you familiar with my writing already know what’s coming, and you’re right: Those balls in the image are all identical in color and shading.

I poked around the image with Photoshop, and it’s clear the balls are all the same, as if copied and pasted, but then stripes of different colors added going across them. The image was created by David Novick, a computer and information science engineer. The illusion is popular on Twitter, and in a conversation with someone Dr. Novick posted the same image without the stripes going across the balls:

The same illusion but without the stripes shows that the balls are all the same. Credit: David Novick, used with permission

How about that? Here’s a quick animation I put together that switches between the two.

An animation switching between the full illusion and the image without the stripes across the balls. Credit: David Novick / Phil Plait

When I look at the balls I see different colors. The ones in the top row, from left to right, look greenish-yellowish, bronze, and blue-purple to me. What’s funny is they look that way when I’m not looking directly right at them; when I shift the focus of my eyes to a different place in the image the colors shift as well! Each ball looks somewhat brassy when I look right at it, but then shifts in color when I look away. It’s… well, it’s irritating, a little bit. But in a good way: It’s fascinating.

So what’s going on here?

In a nutshell, we do perceive colors as they stand on their own, but also by contrast with colors around them. If I put up an image of a red square, then (assuming you have normal color vision) it looks red. But if I put up objects with other colors around it, the color we perceive changes a bit. That can be manipulated using stripes of different colors, for example. In the top row, note the colors of the stripes going across the balls. The left one has green stripes, the middle one red, and the right one blue. That changes how we see the balls.

This is called the Munker-White illusion (or sometimes just the Munker illusion), and it’s a powerful one. When you’re not looking directly at the balls, the color of the stripes pulls the color of the ball toward it, in a manner of speaking, so the green stripes make the ball look greener. It’s weird.

If you still don’t believe me, here’s a far simpler example, again from Novick:

A simple example of the Munker-White illusion, where the colors we perceive from the circles are affected by the stripes; the circles are the same color. Credit: David Novick, used with permission

[Many more such illusions from Novick are available, too.] The circles are all the same color and brightness (the RGB values are 255, 238, 138), but the ones with green stripes look yellow, and the one with red stripes look like a dull pink or coral. To me, the yellow appears brighter, more vivid, while the pink looks duller, too. That last bit is part of the White Illusion (ironically, named for Michael White, the person who described it, and not the color); the brightness (or more accurately, the luminance) of an object can seem to change when contrasted with differently shaded things around it. The Wikipedia page has a great example of it. This is also related to the Cornsweet illusion and the checkboard shadow illusion, too.

It’s also another example of my favorite optical illusion of all time, which does this same trick but with a spiral pattern: 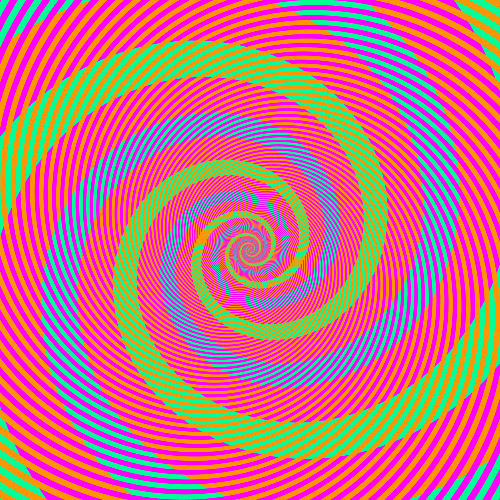 An astonishing color optical illusion: The blue and green spirals are the same color, but appear to be different due to different contrasting color stripes across them. Credit: Akiyoshi Kitaoka

The blue and green spiral arms are the same color! That one is by master illusion creator Akiyoshi Kitaoka, and perusing his site is basically a hammer-blow to your perception that "seeing is believing."

Because it really ain’t. Seeing is no more believing than data are information. A lot goes on between the real world and what your brain is telling you. There are countless ways to alter perception, making one thing look very much like something entirely different.

And that is a lesson we all very much need to keep in mind. Because that isn’t just for illusions; it’s for every single thing you allow into your brain — whether its color, sound, or political opinions. So the next time someone shows you some data in an effort to convince you of something, remember what stands between you and turning it into information.