Like some cosmic easter egg containing a magical elixir, one of the most famous space rocks to have fallen onto our planet has now been confirmed to contain molecular fluids inside which point to the elemental building blocks of life.

A new study presented by a team of international researchers in the U.S. and Canada has discovered 4.55-billion-year-old, sodium-rich alkaline fluids in the Tagish Lake meteorite, a well-known meteorite that once called our Solar System’s main asteroid belt its home.  In a research paper published this week in the online scientific journal, Proceedings of the National Academy of Sciences, the curious crew were amazed to uncover rare compounds dating back to the formation of our stellar neighborhood. 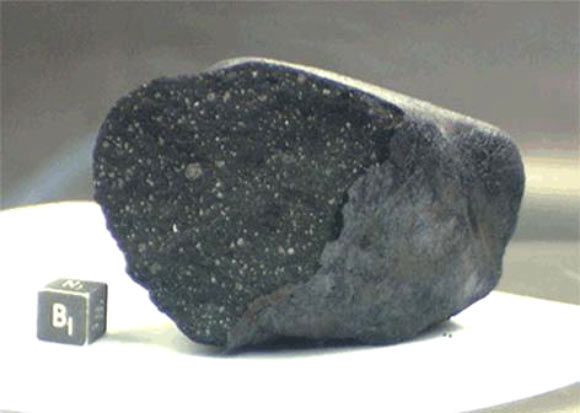 Pieces of Canada's Tagish Lake meteorite dropped from the Yukon Territory sky back on January 18, 2000 after a massive flaming meteoroid detonated in the upper atmosphere at an altitude of approximately 25 miles.

The subsequent explosion was equal to an estimated 1.4 kilotons of TNT, which could be compared to 1/10th the total energy of the Little Boy atomic bomb dropped on Hiroshima on August 6, 1945. Its blazing fireball was widely witnessed in Southern Yukon and northern British Columbia, Canada, as over 500 smoking fragments rained down onto the landscape and were gathered by local residients from the lake's iced-over surface.

Tagish Lake's celebrity meteoroid was calculated out to have been about 13 feet in diameter and tipped the scales at nearly 61 tons prior to violating Earth's atmosphere. But after the thunderous blast, scientists believe 97% of its mass vaporized instantly in a stratospheric dust cloud viewed in the fireworks' aftermath as spectacular noctilucent clouds northwest of Edmonton during sunset.

Royal Ontario Museum's Dr. Lee White led the investigation, which employed atom-probe tomography to image atoms in 3D and hone in on molecules aligned on the borders and pores between framboidal magnetite grains.

It was here that researchers located water precipitates hidden between the boudaries. These structural grains are thought to have once comprised the outer crust of the larger mother asteroid that peppered the vast ice sheets of Tagish Lake twenty years ago this year.

“We know water was abundant in the early Solar System, but there is very little direct evidence of the chemistry or acidity of these liquids, even though they would have been critical to the early formation and evolution of amino acids and, eventually, microbial life,” Dr. White explained. “Our research provides the first evidence of the sodium-rich (and alkaline) fluids in which the magnetite framboids formed.”

Providing a peek into the evolution of prebiotic life in the Solar System, the meteorite fragment's insoluble and soluble organic compounds like amino acids, amines, and hydrocarbons are a microscopic time capsule back to the origins of the universe.

While the majority of hurtling meteoric space rocks explode in a glorious conflagration as they touch Earth's thick atmosphere and disintegrate into a vivid display of shooting stars, those that do make it through unscathed plop onto the planet as meteorites. Entered into the record books as the largest meteorite ever found in North America is the legendary Willamette Meteorite.

Measuring in at a whopping 84 square feet and weighing a hefty 34,000 pounds, this behemoth pock-marked beauty from beyond the stars was discovered by Oregonian Ellis Hughes in 1902 on land near Portland owned by the Oregon Iron and Steel Company. Comprised of iron and nickel, the rare specimen was acquired by the American Museum of Natural History in New York City in 1906 where it remains on display today.

It's a fan thing
Join SYFY Insider to get access to exclusive videos and interviews, breaking news, sweepstakes, and more!
Sign Up for Free
All Posts About
News
Science
Meteor
Meteorites
Related Stories

How far away can you see a meteor?

Why do asteroids explode high in the atmosphere?