Streaming platforms might be bleeding our bank accounts dry, but they sure do give a wide range of options around this time of year and a plethora of shows to choose from to get your holiday fix.

I recently revisited some of my favorite holiday-themed animated superhero episodes, a few of them I hadn’t seen in a while because they weren’t available to stream anywhere. I’m happy to report each and every one of them brings me just as much joy as it did the first time I experienced it, and I hope you seek them out to watch for the first time or rewatch yourself.

"A Bullet for Bullock" - Batman: The Animated Series

Although the only indications that this installment of Batman: The Animated Series is holiday-themed are the snow and Bullock saying "Merry Christmas," it's still one of my favorites for petty reasons. For one, Bullock has to reach out to Batman for help because he’s spooked about a hit that’s been put out on him. There is also a reminder that Batman partakes in borderline Black Air Force 1s activity. He throws a guy off a building and, in true Batman fashion, catches the man just before his brains splatter all over the concrete. Batman’s extreme interrogation tactics don’t take a day off.

My absolute favorite part of this episode is actually the ending. Bullock walks to his front door thinking everything is over and he’s caught the person who puts a hit on him. He is wrong, as Bullock often was. A gun is aimed and cocked by his next-door neighbor. The guy was willing to murder Bullock because he was such a horrific neighbor. If you’ve never felt just a tiny bit murderous about some neighbors, then you might be the Bullock in those pretty relatable feelings. The plot twist at the end of this episode is the gift!

You can stream "A Bullet for Bullock" on DC Universe. 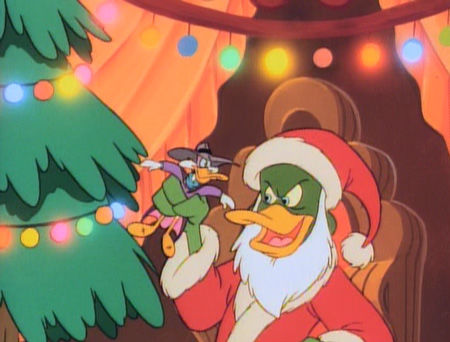 "It's a Wonderful Leaf" - Darkwing Duck

This episode is what The Happening should have been, leaving us all with the reminder that plants actually coming to life messes things up. Darkwing’s nemesis, Bushroot, leads a Christmas tree resistance. With his army of spruces, pines, and firs, he chooses to stick it to capitalism by stealing everyone’s Christmas gifts. Darkwing Duck is having none of that, though, and Christmas Day is saved yet again. I enjoy this episode because it's simple and straight to the point. Get that fake tree instead of the real one or something like that.

You can stream "It’s a Wonderful Leaf" on Disney+. 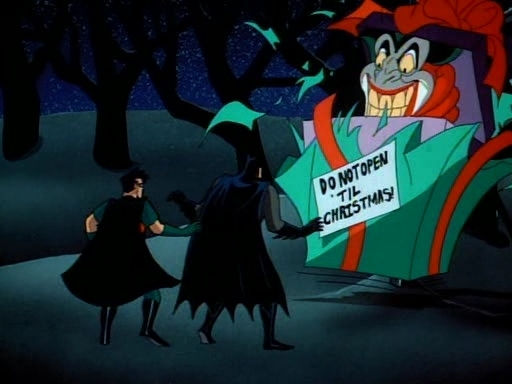 "Christmas with the Joker" - Batman: The Animated Series

Robin just wants to enjoy Christmas Eve. He even convinces Bruce to watch It’s a Wonderful Life. Unfortunately for him, the Joker escapes Arkham yet again. To be honest, I wouldn’t be surprised if the escape wasn’t Batman’s gift to himself. Maybe that’s why the Bat refused to take a night off; he knew crime wouldn’t take a night off because he made sure it didn’t.

Joker doesn’t disappoint Batman either. He hijacks the airwaves with his own Christmas-themed show — which is just him messing with Batman and Robin for sh**s and giggles. We all know how this episode ends, though. Batman defeats Joker and off he goes to Arkham until he inevitably hatches another escape.

You can stream "Christmas with the Joker" on DC Universe.

"Have Yourself a Morlock Little X-Mas" - X-Men: The Animated Series

It’s Christmastime with our favorite mutants as Jean and Gambit fight over the use of seasoning. Actually, the entire exchange between Jean and Gambit is worthy of its own spinoff show. Gambit thinks her food is devoid of any taste and could use some good ol’ cajun seasoning. Beast almost destroys the mansion trying to make cranberry sauce. Jubilee is filled with an insane amount of Christmas cheer and literally wants to give everyone at the mansion a gift. However, she soon learns the true spirit of Christmas after spending it with Storm’s forgotten clan, the Morlocks.

I think this episode is actually the first time Storm has visited the Morlocks since the first season. Storm is pretty much berated the entire episode because she hasn’t at all been around and now one of the Morlocks, Leech, is severely ill.

The X-Men end up saving the day by way of a Christmas miracle and a blood transfusion from Wolverine. As a gift to the Morlocks, Storm relinquishes her duties as a leader, giving it back to Callisto. Absolutely no one eats the food Jean and Remy cooked, which is hilarious given all the arguing they did. The episode ends in true X-Men fashion with Professor X telling a student how proud he was of a lesson they learned that he didn’t at all teach in the first place.

You can stream Have "Yourself a Morlock Little X-Mas" on Disney+.

In this episode from the Justice League animated series, we find out what Christmas is like for some of its members. After wrapping yet another successful mission, Flash, Superman, Green Lantern, Hawkgirl, and Martian Manhunter are free to start their winter breaks.

I personally really love this particular holiday episode because of Superman, who shows his fellow alien team members why he loves Christmas so much. Their part of the episode is what brought me the most comfort and joy.

That doesn’t at all mean what Flash, Green Lantern, and Hawkgirl have going on wasn’t entertaining. Flash is in his own version of the movie Jingle All the Way, and it even ends with Gorilla Grodd helping him. Hawkgirl takes John Stewart to a planet four quadrants over to go clubbing, which ends with them getting into a bar brawl courtesy of Hawkgirl’s instigating.

There are also some memorable moments — like Superman's presents being lined with lead so he can't peek at them, and Martian Manhunter sitting naked on a windowsill with a cat in his lap as he sings opera. Everyone has their own way of celebrating this time of year, and "Comfort and Joy" does a great job of displaying it with some of our faves.

You can stream "Comfort and Joy" on DC Universe.

"‘Twas the Fight Before Christmas" is the most action-packed episode on this list. It’s technically a movie — but for this list’s purpose, it’s a long episode. Princess Morbucks is on her worst behavior and Santa really needs to invest in some kind of security system. Everyone in Townsville is overly excited about the most wonderful time of the year.

Unfortunately for them, Princess ruins it for everyone by breaking into Santa’s compound up in the North Pole and makes some minor changes to his nice and naughty lists. This results in everyone getting coal and Princess getting her wish to become a Powerpuff Girl. As soon as the girls find out what’s happened, the greatest race to the North Pole takes place. It's honestly one of the best fight sequences in the superhero genre. The Powerpuff Girls ultimately end up saving Christmas day and Princess goes back to being a powerless thorn in their sides.

You can stream "‘Twas the Fight Before Christmas" on Hulu. 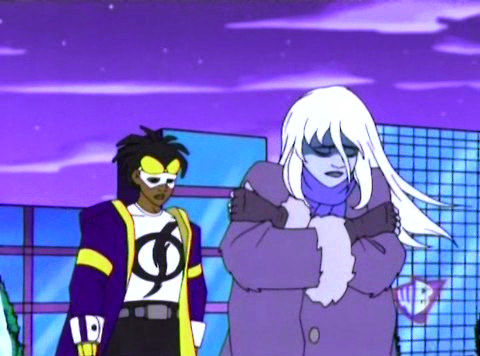 Holiday-themed superhero episodes aren’t always about thwarting some villain's attempt at ruining holidays for everyone. Sometimes they can teach valuable life lessons. Static Shock was an amazing animated series about a Black teenager named Virgil Hawkins who gets powers of electricity and becomes the superhero Static Shock.

One of the best episodes to come from the series is its holiday episode, "Frozen Out". Virgil learns that one of the greatest powers a superhero or anyone for that matter could have is empathy. Virgil encounters a homeless young girl who is also a “Bang Baby” like himself. The episode does a tremendous job of explaining how people end up living on the streets and how we all could do a better job of remembering that people are still entitled to their humanity regardless of their economic status or lack thereof.

The most powerful moment in the episode happens when Virgil seeks out the young girl, Permafrost, to ask what he can do to help her and the two of them find out they share much more in common than they originally thought. "Frozen Out" has a beautiful message that remains relevant to this day.

You can stream "Frozen Out" on DC Universe.

It's a fan thing
Join SYFY Insider to get access to exclusive videos and interviews, breaking news, sweepstakes, and more!
Sign Up for Free
All Posts About
Fangrrls
TV
Christmas
animation
holidays
lists
Related Stories

Midnight Mass: 7 movies and shows to watch when you finish the Netflix horror series