NASA and the ESA's Cassini-Huygens spacecraft mission to Saturn provided the world with some stunning images of the ringed gas giant and its complement of icy moons.

Among the many accomplishments during its 13-year investigation of Saturn, it was the first man-made object to orbit the planet and the first to sample an extraterrestrial ocean when it dipped down into an erupting geyser on the moon of Enceladus.

After completing all of its objectives and its propellant exhausted, the Cassini spacecraft was sent plunging to its demise into Saturn's atmosphere in September of 2017 after performing a "Grand Finale" by zooming through the gap between the planet and its rings.

These risky 11th-hour maneuvers returned a series of detailed measurements that unveiled some distinct features regarding Saturn’s magnetic field and its relationship to helium rain.

Data compiled by the intrepid probe allowed for scientists to peer into the depths of Saturn’s interior makeup where its massive magnetic field churns.

In new research paper published in the online journal, AGU Advances, two planetary scientists at Johns Hopkins University employed computer simulations to test the theory of whether the implementation of a helium rain layer at the top of Saturn’s dynamo zone might influence and reproduce a magnetic field similar to the planet’s surface magnetic field. 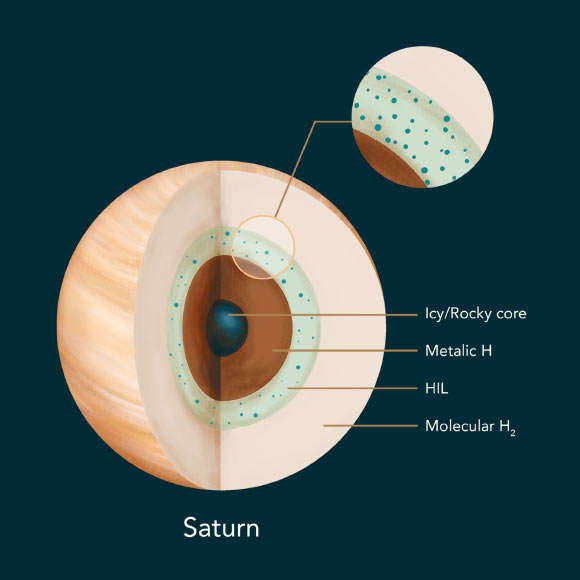 “By studying how Saturn formed and how it evolved over time, we can learn a lot about the formation of other planets similar to Saturn within our own Solar System, as well as beyond it,” said Professor Sabine Stanley, a planetary physicist in the Department of Earth and Planetary Sciences and the Applied Physics Laboratory at Johns Hopkins University.

“Saturn stands out among the planets in our Solar System because its magnetic field appears to be almost perfectly symmetrical around the rotation axis.”

To explore this magnetic mystery and the origins of its engine, Cassini data was inserted into a complex digital simulations used by meteorologists to study weather and climate. Researchers fixated on the question of what ingredients were required to create and maintain this powerful electromagnetic conversion mechanism that creates Saturn’s magnetic field, most notably pointing to the driving layers of helium rain.

“Detailed measurements of the magnetic field gleaned from the last orbits of NASA’s Cassini mission provide an opportunity to better understand the planet’s deep interior, where the magnetic field is generated,” said Chi Yan, a Ph.D. candidate in the Department of Earth and Planetary Sciences at Johns Hopkins University.

Some of the team’s more interesting findings point to a minor degree of non-axisymmetry existing near Saturn’s north and south poles.

“One thing we discovered was how sensitive the model was to very specific things like temperature,” Professor Stanley added. “And that means we have a really interesting probe of Saturn’s deep interior as far as 20,000 km down. It’s a kind of X-ray vision.

“Even though the observations we have from Saturn look perfectly symmetrical, in our computer simulations we can fully interrogate the field. Direct observation at the poles would be necessary to confirm it, but the finding could have implications for understanding another problem that has vexed scientists for decades: how to measure the rate at which Saturn rotates, or, in other words, the length of a day on the planet.”

It's a fan thing
Join SYFY Insider to get access to exclusive videos and interviews, breaking news, sweepstakes, and more!
Sign Up for Free
All Posts About
News
Science
Saturn
Science
space
Related Stories