Comet Interceptor sounds like the ultimate sci-fi blockbuster, but it’s actually even cooler than fiction.

The ESA’s newest defense against a comet potentially shooting for Earth in the future will be ready before that comet even knows what’s waiting for it. Comet Interceptor was recently chosen to be the space agency’s new F-class mission as part of its Cosmic Vision Program. In 2028, this triple threat will be the first spacecraft to encounter a pristine comet or other cosmic object, possibly from the Oort cloud, that enters the inner solar system.

About that triple threat. Comet Interceptor is actually three spacecraft, which will observe the comet (or whatever it is) from different points of view to put together a 3D profile of what the ESA calls a “dynamically new” object that is probably made of the raw materials that survived the violent birth of the solar system.

“Pristine or dynamically new comets are entirely uncharted and make compelling targets for close-range spacecraft exploration to better understand the diversity and evolution of comets,” said ESA’s Director of Science Günther Hasinger, who wants to “be ready for the next ‘Oumuamua-like interstellar object.” 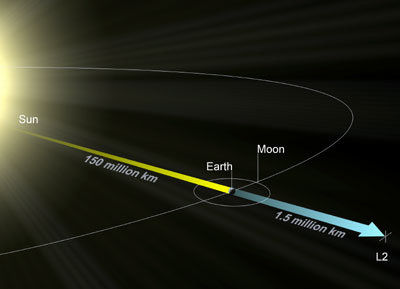 Being an F-class, or fast-class, mission means that the Interceptor will go from development to takeoff in about eight years, giving it enough time to detect a comet coming through. Usually by the time comets are discovered they reach their perihelion (closest point to the sun) and flee the inner solar system way too fast to get an entire mission ready and in space.

The Interceptor will ride with ESA’s Ariel spacecraft, a medium-class exoplanet-seeking mission. Ariel will give Comet Interceptor a boost to the critical Sun-Earth Lagrange point L2, which appears almost a million miles behind Earth from the sun’s POV. When both missions reach L2, Comet Interceptor will wait for its target and then break out on its own and keep propelling itself forward.

After a target is detected, the spacecraft’s three modules will split several weeks before interception. The science payload on each of these modules will see the comet’s gas, dust, plasma, and ultimately its nucleus differently, beaming back multiple perspectives that will improve the three-dimensional information we need to really understand how a pristine comet interacts with volatile solar winds.

ESA doesn’t even need to know where exactly Comet Interceptor will be headed after L2 — yet. The mission will get ready, and after it launches, hang out over there until it finds the pristine comet or other object it’s looking for within about 5 years. Mission accomplished.