On Monday, the creative team that launched BLACK, one of the most talked-about indie comics of 2016, launched a Kickstarter for the next chapter in their Universe’s trilogy, WHITE. Co-writers Kwanza Osajyefo and Tim Smith 3 have reunited with interior artist Jamal Igle and cover artist Khary Randolph, as well as with editor Sarah Litt, for the new six-part saga.

The original BLACK Kickstarter blew past expectations, raking in $30K in three days and a whopping $90K by the end of the campaign. By the end of the month the team had signed with Black Mask publishing, and by the end of the year they had a movie deal. They then published three more volumes in the BLACK Universe: BLACK AF: America’s Sweetheart, BLACK AF: Widows and Orphans, and BLACK AF: Devil’s Dye.

BLACK asked the question, “What if only Black people had superpowers?” and followed the origin story of Kareem Jenkins (codename: “X”) and his mentor, known only as “Juncture." WHITE’s story tilts the lens to ask the question “In a time of supposed inclusion and diversity, how far will those in charge push back to retain the status quo?”

In WHITE, a politician named Theodore Mann, whose family exploited Empowered Blacks for centuries, is now president of the United States. Mann’s administration has enacted controversial measures to deal with the empowered people he’s deemed terrorists, and he is stoking national tensions to win public support for Mann First, a cybernetically augmented soldier program. X has grown to become a symbol of resistance against the Mann Administration.

SYFY WIRE spoke to the creators to find out why they’re only making the first run available on Kickstarter, how they’re dedicated to a “real-world” approach to superpowers, and when we’re getting that movie. 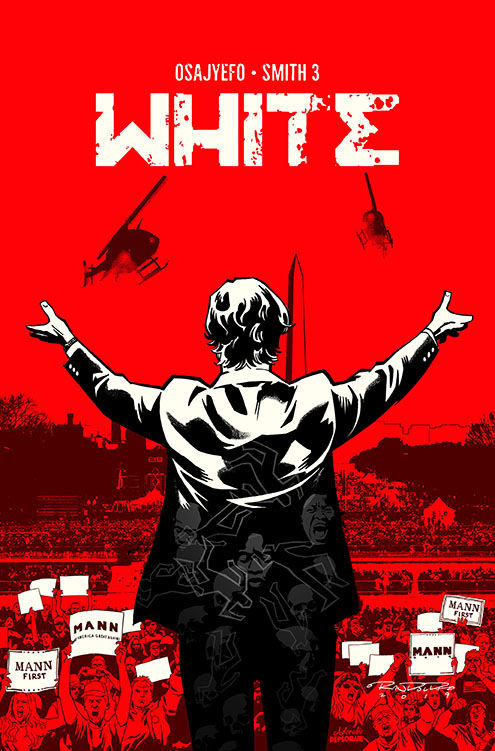 You had incredible success with the Kickstarter for BLACK. Now that everyone knows who you are, why go back to Kickstarter?

Kwanza Osajyefo: Well, everybody doesn't know who we are. It's a big world out there, and there are still tons of people who just haven't been exposed to [BLACK] yet. And as far as coming back to Kickstarter, we just wouldn't be here if it wasn't for our backers. We wanted to come back and offer our previous fans and backers something really unique. But there’s also something for people who are just getting on the bandwagon.

You’ve mentioned that WHITE is the second saga in this trilogy. So we’re getting another story in the future?

Osajyefo: Yes. I compare it all to A New Hope, The Empire Strikes Back, and Return of the Jedi. In this book, it’s pretty clear who the Empire is.

How are you approaching this series differently?

Tim Smith 3: I'm a big fan of reading a story and watching the characters grow. You rarely get to see how a character learns or is affected by the events that have happened to them previously in mainstream comics anymore. So this time, it's really fun to take these characters and apply the events that have happened to them. The way they look, their mannerisms, watching Jamal come in and do that body language that he does so well for the characters and then watch them grow in that way. That's what's special to me.

Jamal Igle: I'm embracing much more of a manga influence for WHITE. I went to Japan and [immersed myself] in manga very heavily. That influence definitely crept into the last couple of issues of BLACK. With WHITE I'm fully embracing that. And like Kwanza and Tim were saying, these characters have grown over the last three years. So my approach to drawing Kareem is from the perspective that he has fully embraced his role. He's kicking ass. In his mind, he is doing what he is meant to do, but he’s 19 and he's full of piss and vinegar and ready to take on the world.

Right. Since he's basically a teenager with adaptability and invulnerability powers.

Igle: Absolutely. He can't die, so he doesn't always think about the consequences for the people around him. And the world has changed radically in the last three years, and that's very present [in the artwork too]. You’ll see in the first couple of pages how much the world has changed.

Is Theodore Mann Kareem’s only nemesis this time around?

Osajeyfo: We're bringing in something of a rival for him with Theodore Mann's son, Thaddeus. He is really the opposite of X. He's always had wealth and power. The world has always been open to him, and he doesn't know anything other than that. Kareem essentially is [his opposite], in that he came from nothing but yet achieves this great power and becomes a huge thorn in the side of Thaddeus' father's administration.

Would you say that in WHITE, racial and socioeconomic and privilege is also a superpower?

Osajyefo: Oh definitely. But it's a different kind of superpower. Theodore Mann, in the previous story [see Issue 1 of BLACK], was secretly imprisoning and experimenting on Black people in collusion with the government. Despite people knowing about those allegations, in his presidency folks are willing to overlook that. [The general population believes] that he is actually somebody who has a lot of experience in dealing with Empowered Blacks and is the best person to lead the country because of this new phenomenon. That's a huge shift in the culture.

The BLACK Universe is obviously not just about Black people. In America’s Sweetheart, Eli was raised in Ohio by a white conservative family and Anansi from Widows and Orphans was sold to a Ninja clan in Japan and Indigo. So besides X who will the people of color in WHITE be?

Osajeyfo: It's funny that you bring that up, because Good Girl from America’s Sweetheart will be making an appearance, along with characters from the previous books too. We will see Detective Ellen Waters again, Juncture, Zero, Indigo, Hood Rat, Anansi. The whole crew's coming back.

Are you dropping single issues like you did last time, or is WHITE going to be a TPB right out of the gate?

Osajyefo: We were a bit ambitious in our first Kickstarter. We heard from our backers that what people really wanted was books. But there's also a difference between the reading habits of comic book readers, so we're offering four different rewards that address that. One of them is all six issues all in one go. So if you're a periodical fan and you want each of those dope Khary Randolph covers, there will be a reward for you. But if you're a collector, and you want those Number 1s with an exclusive variant cover, that is going to be part of a monetary stretch goal.

You have some amazing artists lined up for those variants.

Osajyefo: So we're going to have [variants by] Ashley A. Woods, Jamal Igle, ChrisCross, Jeremy Love, and Sanford Greene, who's also going to grace us with a cover if we hit a certain number. Also, the legendary Denys Cowan has also agreed to do a cover if we get enough backers.

When will this first run hit stores?

Kwanza: Actually, WHITE is a Kickstarter exclusive. This is going to be the only way you're going to get your hands on [the first run] of these books this time around. We thought that because Kickstarter was so great to us in the past, we wanted to reward that. We will also be delivering digitally as well.

So we're never going to be able to pick this up at a shop?

Kwanza: Oh yes! Comic shops will be able to order and stock a second printing after all rewards are shipped. In October the variants of Issue 1 will ship to backers. We wanted to give everybody who backs WHITE a unique and special product. Then we are going to ship out variants of the first issue in October, and then we're going to ship out the trades and all six issues March of next year. That's our target date.

BLACK has been optioned by Studio 8. Have they shown interest in WHITE?

Kwanza: We didn’t just option BLACK, we optioned the entire BLACK Universe. So WHITE is included in that. They were very much interested in the BLACK Universe as a franchise of films.

What is the one thing that you want people to get from this series?

Igle: That's a good question. Kareem’s [journey] is important. He was still kind of finding his place in the grand scheme of things in the first book. He's trying to take charge of the situation now. Juncture sees Kareem as sort of the son that he's lost now that Overdrive has disappeared. And although they butt heads, they're both trying to get to the same place. They just have different approaches to it. I think part of that is that juncture doesn't want to see Kareem go down the same path that uh, that Overdrive did.

Smith: I want people to read the book and like really put themselves in the situations of what these characters would do. What would you do if you woke up and you had a superpower? What would that power be, and what would you do with it, and how do you think the world would react to what you do? Would they try to capture you? Would [your family] freak out, and how would you handle that? I don't think you get many books that would take a realistic approach to a fantasy world setting. I want people to read all these stories, in the BLACK line and WHITE, and say, “Hey, that's something that I never considered.”

Osajyefo: James Baldwin spoke to the destructive and self-destructive idea of white identity, [it's linked to white supremacy] and what upholding that social construct takes away from people. I hope we can convey that in this story. Not as something that's damning, but just something that's very human. We need to actually put a name on our real-world [situation] and examine it in order to move past it as a country.