A neutron star is incredibly small and dense, packing the mass of the Sun into a ball just a few kilometers across. This artwork depicts one compared to Manhattan. Credit: NASA's Goddard Space Flight Center

A little while ago I wrote a fun little piece about the total volume occupied by people on this planet. It was one of those idle questions I think about sometimes, and realized there’s a relatively easy way to figure it out. I know I’m not unique by any means in this way, but I do think I had some rather unusual applications for this knowledge (thanks to my friend Randall).

That volume, incidentally, is about 470 million cubic meters. A decent amount; if you wanted a cubical box big enough to stuff every human into with no air in between them, it would have to be 770 meters on a side. That’s three times the height of the water in the San Francisco Bay to the tops of the towers of the Golden Gate Bridge (assuming your Human Cube™ would float… which it would, a rather important point I make in that article).

So yeah, the math and the concepts were fun to play with.

On Twitter, a couple of people asked about how much volume we’d take up if all the space in our atoms were removed, too. Huh! I could’ve kicked myself when I saw that; I didn’t think of it when I wrote the article, but it seems like an obvious question in hindsight (well, obvious to me, a complete science and math dork). In my calculations I just assumed we’d all get squished together with no air between us, but this adds a monkey in the wrench. A fun one, though, so let’s see.

An atom is mostly empty space. Electrons whiz around the nucleus pretty far out, relatively speaking. An analogy: If an atom is the size of a football stadium, then the nucleus would be about the size of a grape sitting on the 50 yard line. The closest electrons would all be out in the nosebleed section of the bleachers*.

So if you remove all that empty space, basically smashing the electrons down into the nucleus, how much denser would that be?

Well, we have a real-Universe example of this: neutron stars. They are the cores of massive stars that collapse down after the star itself explodes. In a sense the electrons really are smashed into the protons in the nucleus to create neutrons (don’t forget to add a dash of antineutrinos or else your recipe won’t work). These then bump up together with essentially no space between them!

So if we know how dense neutron stars are, we can figure out how much volume we’d occupy if we were similarly compressed.

And we do. Very roughly, neutron star material (nicknamed neutronium, a word I love) has a density of about 1014 grams per cubic centimeter — that’s 100 trillion, or 100,000,000,000,000 grams. This depends on a lot of factors, so we can take this number as an order-of-magnitude guess, probably right within a factor of 10. Close enough, so I’ll just run with it.

The total mass of humans on Earth is about 470 trillion grams. So this math is easy! It means if we were transformed into neutronium, we’d occupy about 4.7 ccs. That’s a cube 1.6 centimeters on a side, a little bit less than the size of the tip of my pinky to the first knuckle. If it were a sphere it would be about the size of a gumball †.

By the way, the gravity you’d feel from that Human Neutronium Ball™ if you held it in your hand (if you could hold it in your hand) would be about 30,000 times the surface gravity of Earth. That’s, um, a lot. Better not get too close; the tides will rip your hand apart. The rest of you won’t fare much better, either.

Out of curiosity, I calculated the escape velocity of the Human Neutronium Ball™, too. This is the speed something has to move to avoid falling back down to the object; for example, if you throw a rock at 11 kilometers per second, it’ll fly away from the Earth forever, never falling back down (anything less than that and Earth’s gravity will eventually slow it to a stop and then pull it back). Escape velocity depends on the mass of the object and how big it is. Doing the math, I found the escape velocity of the Human Neutronium Ball™ to be a mere 77 meters per second!

That’s not much at all, just 277 kilometers per hour. Faster than highway speeds, but only by a factor of 3 or so. I expected it to be much higher, but then I realized the ball is small, just 1 cm in radius. Gravity falls off with the square of distance, so by the time you’re 10 cm away from it the force you feel has dropped by 100. Go out 100 meters and the force of gravity you’d feel would drop by 100 million. So you don’t have to go very far to feel a lot less gravity, which translates to a lower escape velocity. Huh.

Anyway, getting back to volume, an alternate way to think of this whole thing is that while humans occupy a cubic volume roughly three-quarters of a kilometer on a side, an equivalent amount of neutron star would only be 1.6 cm on a side. Put them next to each other and you’d not even notice the neutron star cube.

… or would you? If you were to actually attempt this (either by scooping out the appropriate amount of neutron star, which has its own difficulties, or compressing all humans like some next-level Bond villain or Doctor Who baddie), that wee cube would fall right through the Earth! The surface of the Earth has such a low density compared to that Human Neutronium Ball™ that the gravity of our planet would pull it straight down to the core, almost at free-fall. To neutronium, the Earth is close to a vacuum. A ghost.

If your brain hasn’t been sufficiently exercised (or exorcised) by all this, let me turn it around again. If a sugar-cube-sized lump of neutron star stuff has as much mass as all of humanity, think about the mass of an entire neutron star, 20 kilometers across! Typically, they have about as much mass in them as the Sun. The Sun. In a ball the size of a decent city.

I’ve said it before, and I’ll say it again: SCIENCE! I love this stuff.

P.S. A version of this article (and the original one about the total volume of humanity) first appeared in my Bad Astronomy Newsletter. Sometimes I play with ideas there, then expand on them for the blog. I also have lots of other fun stuff there, too.

*This is an analogy, mind you, and the reality is a tad more complicated. You need quantum mechanics to do this right, and happily a good friend of mine has made a video about it: 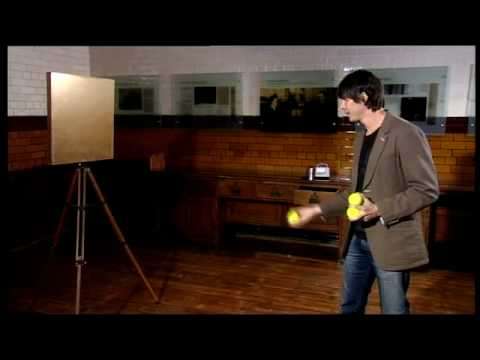 †Let’s say your Humanity Crushing Device™ isn’t quite as good as the sales brochure promised, and can only squish people down to white dwarf density. This is still phenomenally dense, but only about 108 grams per cc — one-millionth the density of the neutron star. That would be a cube only about 1.6 meters on a side. I’m average height, about 177 cm, so this cube would be shorter than I am! Still, if you continue reading the main text above, you may appreciate why I wouldn’t want to stand near it.

It's a fan thing
Join SYFY Insider to get access to exclusive videos and interviews, breaking news, sweepstakes, and more!
Sign Up for Free
All Posts About
Features
Science
Bad Astronomy
neutron stars
Related Stories