There are myriad denizens of the deep that inhabited Earth's ancient oceans, and a recent discovery led by a team of researchers from China's Yunnan University and England's Bristol University has revealed one of the oldest and most bizarre prehistoric creatures ever to have navigated primordial waters.

Scientists from multiple countries and educational institutions have discovered a pristine fossil of a 518 million-year-old sea creature sporting 18 tentacles around its gaping mouth, which helps to potentially illuminate the complex origins of a more recent gelatinous carnivore known as a comb jelly. 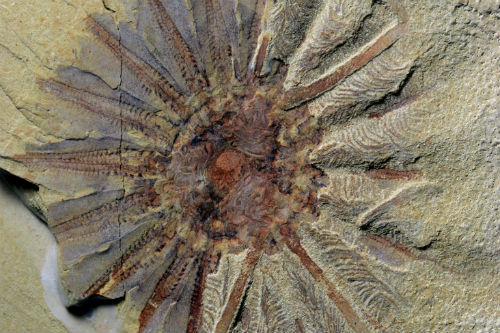 According to the online journal Current Biology, this strange, Cthulhu-esque beast — named Daihua sanqiong — lived half a billion years ago in what is now considered mainland China. The starburst-shaped extinct animal is thought to be a distant cousin of, and shares many anatomical features with, the current comb jelly, a small aquatic creature that employs combed rows loaded with hair-like cilia to propel itself through the oceans.

Lead researcher Dr. Jakob Vinther is a molecular paleobiologist at Bristol University in the United Kingdom and spied the D. sanqiong fossil while visiting fellow scientists and researchers at China's Yunnan University. Sorting through a number of intriguing fossils in their vaults, Vinther zeroed in on a specimen originally discovered by co-researcher and Chinese paleobotanist Xianguang Hou. The official cataloged genus name is based on the Dai tribe in Yunnan and paired with "hua," the Mandarin word for flower and that refers to the animal's flower-like shape.

"With fossils, we have been able to find out what the bizarre comb jellies originated from," Vinther explained in an interview with Live Science. "Even though we now can show they came from a very sensible place, it doesn't make them any less weird."

"To make a long story short, we were able to reconstruct the whole [early] lineage of comb jellies," Vinther added. "This is a big deal, because some scientists argue that these swimming carnivores were among the first animals to evolve on Earth, based on family trees analyses and genetic modeling of modern comb jellies. But now, this international team has possibly shown that comb jellies have a long lineage that precedes them."

Here's an artistic impression of these remarkable prehistoric creatures, courtesy of Dr. Vinther and his team, and exclusive to SYFY WIRE:

Whatever the final verdict on the pedigree of this 18-tentacled specimen, it remains one of the oldest fossils of a sea dweller ever found and time will tell whether the long-lost relative is linked to the modern comb jelly. You can check out the complete study, which was published last week, in Current Biology.

It's a fan thing
Join SYFY Insider to get access to exclusive videos and interviews, breaking news, sweepstakes, and more!
Sign Up for Free
All Posts About
News
Science
Paleontology
Science
dinosaurs
Related Stories