Writer Fred Van Lente has a talent for updating characters. Not only has his work on Archer and Armstrong, Ivar:Timewalker, and Generation Zero helped rejuvenate Valiant Comics, but characters he’s created seem to find their way onscreen — like Shades Alvarez (Marvel’s Luke Cage) and Keemia Alavardo, Sandman’s daughter (Amazing Spider-Man).

Van Lente is back with Valiant’s big summer comic Psi-Lords, a new story about some of Valiant’s oldest characters drawn and colored by Renato Guedes. The original team were descendants of Valiant’s H.A.R.D. Corps soldiers who willingly injected themselves with nanites. That gave them superpowers like another major Valiant character, Bloodshot (but without the Wolverine backstory). The colors of the original Psi-Lords powers and uniforms represented their emotions and skill sets. If that sounds a lot like the Emotional Lantern spectrum, you’d be correct (except that Green Lantern storyline debuted about 20 years after Psi-Lords).

The updated squad have been plucked from different parts of the globe and wake up on a ship with no memory of how they got there, with powers they don’t have full control over yet. Tank can control and manipulate force fields around himself; Artisan can make constructs out of visible light; Beacon has both telepathy and control over the electromagnetic spectrum; and the wild card is Hazard, who can control life force. Depending on her mood, she can create it or viciously take it away.

SYFY WIRE talked to Van Lente about Psi-Lords, the connection to Guardians of the Galaxy, and that time he wrote a Jack Kirby play.

What about comics brought you joy as a kid?

Fred Van Lente: My dad had this book, The Great Comic Book Heroes by Jules Feiffer. He was the great Pulitzer Prize-winning cartoonist who started his career as an assistant to Will Eisner on The Spirit. He had written a book of these essays in the late '40s, and when they put it out it was bundled with all of these Golden Age superhero stories. Like Joe Simon and Jack Kirby’s Captain America, the origin of Batman, and the first appearance of Joker. Stuff like that. My mother tells me that was the only book I wanted her to read to me. It’s a gigantic red book, which I still have a copy of, covered in terrible crayon drawings of Batman and Green Lantern.

Did Batman and Green Lantern become some of your favorite characters as a kid?

Not really. About three or four years later, Pocket Books started coming out with these little paperback reprints of the original '60s Marvels of the Steve Ditko and Stan Lee, Doctor Strange and Spider-Man, and then the Jack Kirby and Stan Lee HULK and Fantastic Four and all that stuff. That got me hooked. My first real love was the Ditko [run of] Spider-Man.

You wrote a play about Jack Kirby, didn't you?

Yes. It was called King Kirby, and I collaborated with my lovely wife, the playwright Crystal Steelmint. It’s about the life of Kirby and sort of this conflict with Stan Lee and all the genuine struggles he had to go through in his life. He's like the Forrest Gump of comics, in the sense that he was always everywhere all the time. He was there for the Golden Age. And then he went to fight in France and then he came back and co-created Romance Comics, which symbolized the '50s squeaky clean camp culture. Then he went to Marvel and ended up doing all these psychedelic comics, like New Gods.

Were there other writers or artists that profoundly affected you?

Absolutely. I love Steve Gerber, who was big in the '70s. I became a big Gerber collector in high school. I had complete runs of Man-Thing and Howard the Duck. He was the first person to write Guardians of the Galaxy, which inadvertently became a significant influence on Psi-Lords. I loved how he incorporated social issues and ripped-from-the-headlines stuff in his comics in a fun way, as opposed to being heavy-handed with it.

It’s funny you mention Alvarez. I participated in this local pub trivia game, a question was: "Shades Alvarez appears on what Netflix Marvel show?" Obviously the answer is Luke Cage. But it took me about 10 minutes to realize, "Hey! I named him that!"

So the work-for-hire stuff is excellent, the money's great, but you end up like seeing your stuff second-hand. I gave Sandman a daughter when I was working on Amazing Spider-Man. Then I saw that she popped up on a Spider-Man cartoon that featured her. You have this weird sort of like alienation from [mainstream characters] that you've contributed, yet you feel like you're part of something larger than yourself. But it's much more satisfying from a creative standpoint to be associated with specific characters and being known as having created them. 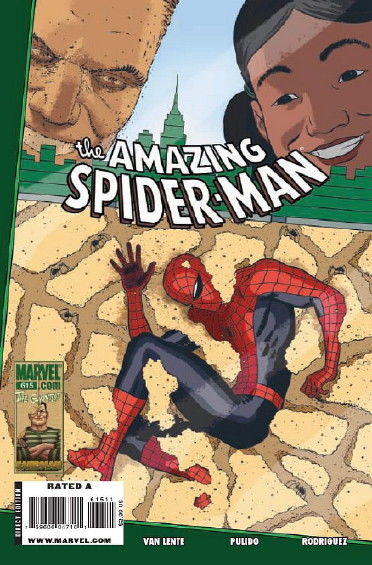 Archer and Armstrong are interesting because they’re comedic and I know them [so well]. Armstrong drinks a lot and is well read, which is something I can relate to, and Archer was raised very Christian. That's also a big part of my background, as I was profoundly religious when I was like a teenager, when I was about Archer's age. So I super relate to him as well.

Valiant's original Psi-Lords came out in 1994. Did you throw everything out and start over?

Well, long story short, I threw it all out. I reread the entire 10 issues original series, then, sort of like a vulture, picked my way through the carcass and got the stuff I could digest. Then left the rest, to lie in the sun.

The significant difference is the original Psi-Lords was set in the 4000 A.D. world, and ours is set in the present day. What I liked most about the series was that the original Psi-Lords were an evolution of this group called H.A.R.D. Corps, a current day superhero team where they all had chips in their brains. They have what I like to call a “diner menu of superpowers” — one of the better Valiant Comics premises as far as I'm concerned.

When the crew wakes up on the ship in your version, they don’t know where they are or what powers they have.

Yeah. In fact, the Psi-Lords referenced here don't even necessarily refer to the four main characters. In this version they are ancient psychic tyrants. I like to say they are the closest that the Valiant Universe has seen to gods. The gods ruled the universe thousands of years ago until they became trapped in this horrible prison called the Gyre, where our four heroes or Earth astronauts all find themselves in as well. But with no memory, no idea how they got there, they don't understand these crazy powers, and a mysterious entity tells them they’ll need to find these "Psi-Lords" somewhere on the Gyre also.

Earlier you mentioned there was a connection between Green Lantern and Guardians of the Galaxy. What was it?

So the original, Steve Gerber, Al Milgrom, Guardians of the Galaxy, I like his series, which was the original Guardians. So it was Yondu, Starhawk, Vance Astro, and Martinex, and that whole bunch — only a couple of which have filtered through to the Marvel Cinematic Universe — was like a snarky Star Trek.

Well, the title of the fourth issue of this run of Psi-Lords is a title of one of my favorite stories from the Steve Englehart, Al Hiddleston Guardians of the Galaxy: "Embrace the Void," which is a lovely turn of phrase.

You've worked with some fantastic artists. What was the process like working with Renato Guedes?

Most of the time issue ones are super tricky for many reasons. A lot of times in mainstream comics you are writing Issue 1 without really knowing who your artist is and even knowing their name, not having worked with them before and kind of mind-melding with them. It's a learning process. But Renato is some sort of like almost superhuman himself.

I’ll send in the script, and what you saw in the comic, sans lettering, that's what I get in my inbox. Renato sends in fully colored rendered pages. It just melts your face, and every Friday is a treat. Sometimes he deviates from the script, and nine times out of ten I'm like, “Well, we're doing this now.”

Is Psi-Lords a good jumping-on point for fans who aren't familiar with Valiant Universe?

Yeah, absolutely. I mean, one of the great things about the Valiant line is that every book is sort of a world unto itself. The Psi-Lords storyline is very much a sort of space opera. And you've got Ninjak, which is an espionage book. You have Harbinger and The Life and Death of Toyo Harada, which are X-men type stories.

No other Valiant character shows up in Psi-Lords until about Issue 4. That being said, it still works, as this is an ongoing and because we're building towards [a time when] the various worlds will intersect.

Could Armstrong end up on this ship, drink in hand? Because these four could use a little fun.