Sending humans into deep space, even the moon, isn’t as easy as launching a spacecraft and waiting for a call to Houston. You have to figure out how to keep said spacecraft afloat, and said humans alive.

NASA’s Orion spacecraft will be taking off on the space agency's SLS to fly us to the moon for the first time since the Apollo era on upcoming Artemis Missions (is this going to be the Artemis era?). The moon isn’t Orion’s final destination, because it will venture beyond the moon to what NASA says is a distance 1,000 times farther from Earth than the International Space Station. Make that farther than any spacecraft carrying humans, period. That means it needs tech as advanced as its sci-fi-sounding missions.

Humans need to breathe. More so, we need to breathe air without anything floating around in it that could potentially destroy our lungs. Ever try gasping for breath on a disgustingly humid day and feeling the relief of an air-conditioned building? Humidity is just one of the factors NASA has to consider as it develops a new system that will remove the humidity and CO2 from the air, which also helps the hardware on board, since water could corrode hypersensitive equipment. And it takes up much less volume. Extended missions far from the home planet need max space for food and water, spacesuits, and to allow the crew to stretch their limbs. 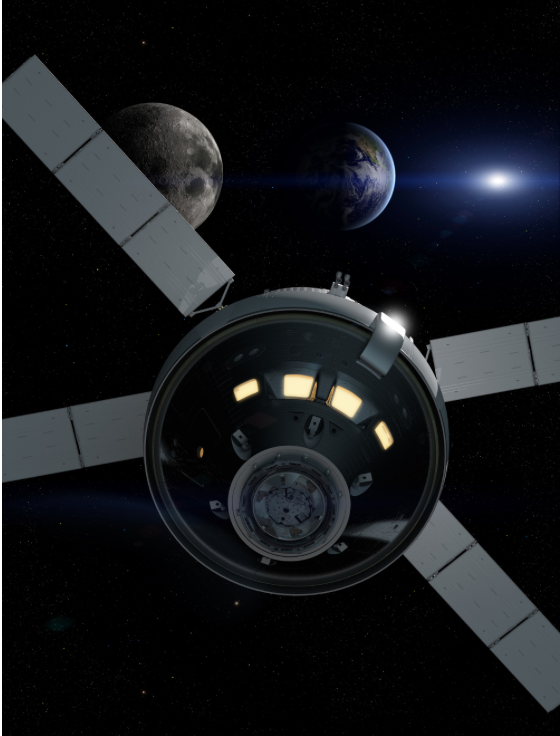 Propulsion is critical to a vehicle that will keep going boldly where … you get it. Orion is going to have to take on 2,000 gallons of propellant for its 33 engines. The main engine will maneuver the spacecraft into and out of lunar orbit, and has a backup just in case it malfunctions en route to the moon or Mars. The other 32 engines will steer and control. Future spacecraft will ditch the propellant altogether and convert water into fuel by splitting it into oxygen and high-powered hydrogen.

Killer radiation is another thing you have to consider seriously if you’re venturing past our atmosphere and the protective ozone layer that comes with it. There is no amount of sunblock (and no specific type of sunblock in existence yet) that can possibly protect an astronaut from getting radiation-bombed by solar storms and other cosmic phenomena that can cause chronic health issues and computer disruptions. Disruptions to anything involved in communication are kind of a big deal. Orion is ready to block intense radiation with radiation sensors, self-checking computers, and a backup plan for astronauts to hide out in a makeshift storm shelter that will be stored under the main deck until needed.

One more thing: GPS doesn’t work outside of Earth — there’s a reason it’s called a Global Positioning System. That means astronauts need a reliable form of navigation so they don’t end up lost in space. Since Orion will be well out of the realm of GPS and the communication satellites orbiting our planet, it will need to switch to use all three of NASA’s communications networks plus backup communications. It will switch from Near Earth Network to the Space Network, backed by NASA Tracking and Data Relay satellites, as it zooms farther and farther from Earth, and finally to the Deep Space Network when it gets far enough.

Orion might have been considered a thing of science fiction during the Apollo era, but decades later, such advanced technology has become a tangible reality. Too bad NASA won’t give away the secrets to its de-humidifying magic.

Don’t panic! Betelgeuse is (almost certainly) not about to explode