The more than 3 million people on Facebook who've said they're "going" or "interested" in storming Area 51 might want to know about another locale designed to attract extraterrestrials that won't require invading a military base. Might these would-be stormers want to check out the UFO Welcome Center in Bowman, South Carolina?

"I haven't quite called this 'Area 52' yet," Jody Pendarvis, creator of the Center, tells SYFY WIRE. "I was thinking of it, though."

Pendarvis began building something on the grassy lawn in front of his mobile home in 1994 with no clear intention for his creation. "It just kind of sprung up with no diagram," Pendarvis said. "I didn't name it until '95 or '96 because I didn't know what I was building."

Now the silver, three-story dome-shaped structure exists with the stated purpose of attracting UFOs to Earth.

I visited the UFO Welcome Center on a late spring weekday. Several people had already signed the guest book that day prior to my early afternoon arrival. I'd found the Center when searching for roadside attractions on the Roadside America website. Pendarvis says that's common, and many visitors also learn of his creation from a billboard that he pays for on I-26.

According to Pendarvis, multiple people visit the UFO Welcome Center on a daily basis. It's open to the public even when he's not home. "I don't mind one bit," he says, giving visitors the okay to come at any time of day. "They can go in, walk up, and have a good old time."

The UFO Welcome Center attracts a variety of people, though the initial clientele skewed older. "At first I was getting visitors that were almost senior citizens, 50-year-old people and above," Pendarvis, who is himself 68 years old, recalls.

In recent years, however, a wider range of people have begun visiting the center. "Now I'm getting people from around the world," Pendarvis says. "I had some sign the book the other day from Ireland and yesterday from Ukraine. Within the last six months, I had some from China stop by."

Visitors from farther away usually know of the UFO Welcome Center from Pendarvis' media appearances, which include appearances on The Daily Show in 1998 and 2000, a 2013 Vice Fringe interview, and two recent local newspaper articles. That said, many of the visitors are simple road trippers like myself, looking for an interesting distraction to break up a boring drive rather than folks who embarked on a UFO pilgrimage. That's fine too. As Pendarvis notes, "there's hardly anything to see between Florida and South Carolina."

But Pendarvis views his creation as more than just a roadside attraction. When asked if he genuinely built the UFO Welcome Center in hopes of attracting aliens, Pendarvis' answer is an earnest affirmative. He believes aliens are real and thinks his UFO Welcome Center might work to attract them. He explains that someone spotted a UFO in 1999 just eight miles away from his structure, and that he saw one himself at 3 a.m. one weekend that same year.

Pendarvis won't discuss whether he's seen UFOs since 1999, claiming that government officials visited him twice after he spoke publicly about his first sighting, and he'd rather they not visit again. 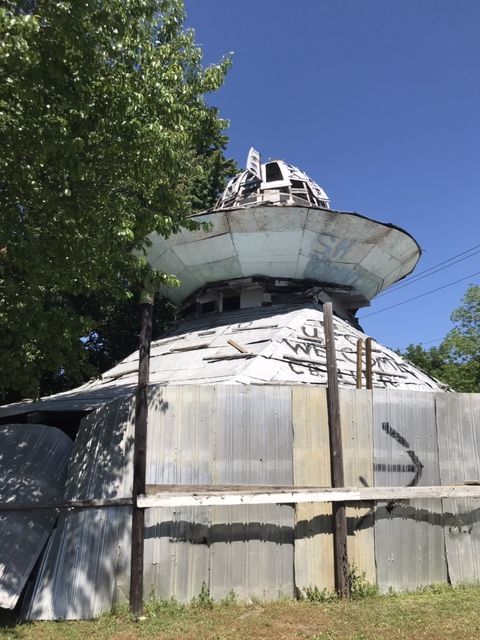 Pendarvis limits whom he speaks with, trying to talk only to people who take him seriously.

"I cut off my landline because most people [wanting an interview] want to make a fool of me," Pendarvis says. "The Daily Show was definitely [making fun of me]. They make fun of everything."

The town of Bowman, which is home to fewer than 1,000 people, appears to take Pendarvis seriously, however. They offered to make the UFO Welcome Center an official landmark. That would require a loss of control, though, so he turned them down. For as long as Pendarvis is alive, he'd like to be in charge of the Center.

"If I'm not mistaken," Pendarvis claims, "after I'm dead, the town will tear mine down and create a better one because it's already a big tourist attraction."

As I walked through the Center, I noticed that the floorboards felt rickety and much of the construction looked haphazard, with wood pieces of all shapes and sizes nailed on top of each other. Accessing the top level required I climb a ladder hanging from two-by-fours. Tarps, scrap metal, old electronics, and vintage kitchenware were also strewn about. Pendarvis says that nobody has been injured at the Center — at least "as far as I know."

"I do have a sign that says 'Enter at your own risk,'" he says. "A lot of people when they leave say, 'Hey, that's a good sturdy building.'"

Pendarvis' background isn't in construction, but he believes the infrastructure is solid, noting that the UFO Welcome Center survived Hurricanes Hermine (2016), Matthew (2016), and Michael (2018), though he took much of it apart ahead of Hurricane Matthew and then reconstructed it afterward.

"My dad was an electrician and my uncle was a carpenter, so I learned a little bit from them," he explains, but for the most part, Pendarvis taught himself how to build. "I just put boards together and use screws, bolts, and nuts."

Pendarvis holds a degree in computer science and worked for a few years to develop an early tax preparation software. He then went on to be a forklift driver, which he did up until retirement. But his retirement doesn't mean that he's spending all his free time at the UFO Welcome Center. "Lately, I'm hardly around at all," he says.

When I asked what takes up his time these days, he tells me, "I date women. That's one of my biggest hobbies lately."