Going full circle: A rainbow all the way around. Kinda.

A circular rainbow... due to a reflection in water. Credit: Göran Strand

There’s beauty in science. Let me show you.

Have you ever seen a circular rainbow? It’s technically possible, though you have to have special circumstances for it, like being in an airplane, or in a tower high above the ground.

Or you can cheat. Not in an unfair way like using Photoshop, but by being at the right place at the right time, and reflecting on the scenery a bit.

A circular rainbow... due to a reflection in water. Credit: Göran Strand

[A circular rainbow... due to a reflection in water. Credit: Göran Strand]

That lovely picture is by Swedish astrophotographer Göran Strand, who happened to catch the optical phenomenon in Vansbro, Sweden, on June 24, 2017, just as the Sun was setting.

The timing was critical for this shot, as much so as the still water needed to reflect it. Rainbows are due to sunlight getting reflected off the backs of water droplets in the air. Due to the geometry of that reflection, you only see the rainbow light sent back to you from drops that are about 42° away from the point in the sky opposite the Sun. 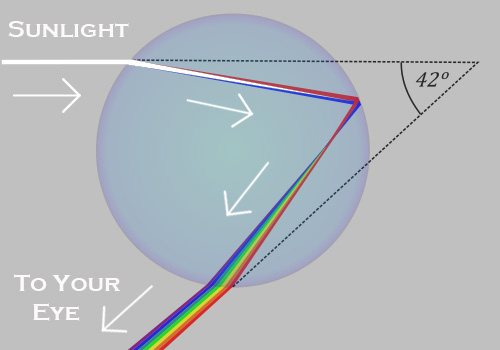 [Light gets bent (refracted) and reflected inside a raindrop. Credit: Wikipedia/KES47, adapted by Phil Plait]

If you have a hard time picturing that, then think of it this way: Picture the Sun low in the sky -- say, 10° above the horizon (roughly the width of your fist held at arm’s length). Now turn around so you’re facing in exactly the opposite direction. The point in the sky opposite the Sun —the anti-solar point— is now in the direction you’re facing, but 10° below the horizon.

If the area of the sky around the anti-solar point has water droplets in it —say, from a rainstorm in that direction, or due to a sprinkler or waterfall shooting water into the sky— and the Sun can shine on it, then you’ll get a rainbow that is exactly a semicircle, half a circle stretching up 42° into the sky.

And that’s what Göran did! The rainbow is very nearly a perfect semicircle, and the reflection in the water makes it a complete circle. Amazing.

But there’s more! Light bends when it enters and exits the water droplet (what we call refraction). But red light refracts less than blue, so you only see it from water droplets a little farther out from the anti-solar than blue. This spreads the colors of the sunlight out. Not only that, but sometimes the light can get reflected inside the water droplet twice, making a secondary rainbow farther out than the primary one. You can see this a bit in Göran’s photo (to the upper right), but it’s faint. When there’s enough light the secondary is brighter, and you can see the colors are reversed! That’s because the second reflection in the droplet reverses the colors, just as looking in a mirror reflected in another mirror reverses the first mirror’s reversal.

One final thing to see in Göran’s shot: Right in the center, you can see rays of light and shadow converging. Those are called crepuscular rays, what most people call sunbeams. They’re really just sunlight shining through clouds or past mountains, contrasted with the part of the sky shadowed by those same obstacles. They appear to diverge away from the Sun, but they converge on the anti-solar point. And this part really throws people: They’re parallel!

I could go on and on, taking about the supernumerary arcs, Alexander’s dark band and more. I love the optical effects of rainbows, and I never get tired of them. And it goes to show you: When it comes to science, you’re soaking in it. It’s literally everywhere, all around you, affecting everything you see and do in life.

Sometimes, you just have to notice it. And when you do, you’ll find there’s science in beauty … and you’ll realize you’ve come full circle.

Here are the unsung all stars of the 'Shrek' soundtrack

'Obi-Wan Kenobi': Here’s what Ewan McGregor had to practice up on