Hayabusa-2 lingers over the asteroid Ryugu, just 21 meters from the surface, in this image taken on October 25, 2018. Credit: JAXA

Look, I don’t mean to make this blog all spacecraft-getting-near-tiny-asteroids all the time, but in my defense we have two spacecraft getting near two tiny asteroids.

For today I mean this to be about Hayabusa-2, which arrived at the very roughly 1-kilometer wide diamond-shaped bag of rocks called Ryugu back in June. Not long after that it released two rovers called MINERVA-II1 A and B to hop around the surface, and then a lander called MASCOT, which spent about a day taking close-up images before its battery ran out.

Another rover, MINERVA-II2, will be dropped in the future… but the big prize for the mission will be the main spacecraft dropping down to the surface and retrieving samples of material to be sent back to Earth.

This is a much harder goal than you might think. Hayabusa-2 is a rectangular box about 1 x 1.2 x 1.6 meters in size, and has a pair of solar panel wings that extend 6 meters across and four long. The surface of Ryugu is covered in jagged and pointy rocks and boulders, so engineers on Earth had to map the entire surface and carefully examine it for a spot where the spacecraft could get close enough without scraping some important bit against a piece of asteroid.

They found a likely location, and on October 25 the probe dropped down to within 21 meters of the surface and flew away again in a practice run. As it did this approach-and-flee, a camera on board took a series of still images that have been put together into a truly amazing video:

It then flew away again, and as it left it took a series of images space one-second apart, creating this truly amazing video:

I was rather moved by this. I’m torn by the dichotomy I see here; Ryugu is an asteroid, a loose pile of rubble held together by its own feeble gravity orbiting the Sun and currently 300 million kilometers from Earth. Yet it’s so small that if you plopped it down (carefully and verrrrry slowly) in the Rocky Mountain foothills you’d hardly notice it (though it would create something of a commotion as it fell apart under Earth’s gravity). It seems familiar like images of a volcanic landscape, but it’s as alien a locale as our solar system can provide.

And we have close-up animations of it, taken by a small robot we sent there, and can watch in the comfort of home as the shadow of our mechanical proxy moves, expands, and contracts across the surface. Incredible.

And then there’s the prosaic nature of what you’re seeing. The goal to be kept in mind — bringing to Earth a piece of this landscape — and the engineering, the planning, behind it.

As you can see, the surface is pretty rugged, and I cannot blame the folks at the Japanese Space Agency for performing a series of practice maneuvers before trying a landing out for real. Attempts have been made like this before on other celestial bodies, like Philae on the comet 67P/Churyumov-Gerasimenko, and even a first version of the MINERVA rover on the asteroid Itokawa, by the Hayabusa-2’s predecessor, Hayabusa. But these attempts met with limited success (a polite way of saying they didn’t at all work as planned). Landing and taking off again from an asteroid is extremely tricky.

For example, the distance to the asteroid surface is determined via bouncing laser pulses off the surface, but the horizontal motion is harder to determine, so the spacecraft can drop “target markers” which will serve as benchmarks to guide its motion. It released one during this maneuver. 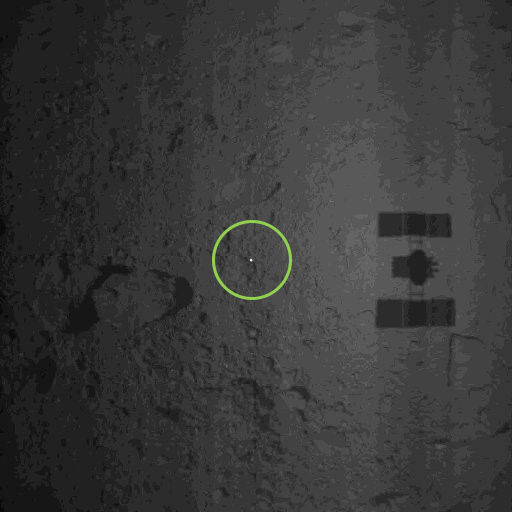 Hayabusa-2 dropped a “target marker” (bright spot inside green circle) on the surface of Ryugu to help measure the spacecraft’s motion as it approaches the asteroid’s surface. Credit: JAXA

Given that the spacecraft was just 21 meters from the surface — the height of a four or five story building — I can assume the shadow in the video at closest approach is about the same size as the spacecraft itself. That makes the big rock you see near the shadow the size of a house, rugged and rough and something to be strictly avoided. The target area looks relatively smooth, but is still strewn with rubble. And looks can be deceptive: The Sun is directly behind the spacecraft (obviously, since you can see its shadow) and that tends to wash out details and surface topography. You can’t see shadows well or at all, and that flattens the image, making it appear smoother. Smaller rocks still capable of trouble can be hidden.

Of course, the engineers have already mapped this area, so I assume it’s as safe as they can be sure of. Now that the test was a success, the first sample collection for real should happen any time now.

Those will stay on board while further science is done at the asteroid. In April Hayabusa-2 will shoot a high-speed projectile into Ryugu to excavate material from beneath the surface, which it will then collect as well, and all that will then be sent to Earth for analysis in late 2020.

The shadow of Hayabusa-2 over the surface of the asteroid Ryugu can be seen in this image taken from a height of about 21 meters. The dashed circle is the planned landing spot. Credit: JAXA, University of Tokyo, Kochi University, Rikkyo University, Nagoya University, Chiba Institute of Technology, Meiji University, University of Aizu, AIST

And remember, in the meantime NASA’s OSIRIS-REx is approaching the even smaller Bennu, and will be sending us better and clearer images over the next few weeks. Remember too that it will be returning samples of that asteroid to Earth as well.

Also, there’s something I want you to know and appreciate. The word “asteroid” means literally “star-like”, because when they were first discovered early in the 19th century, they were far too small to be seen as anything but dots of light in the best telescopes.

And now we go to them. They are worlds, or pieces of worlds, with their own environments and character, worthy of our study at least if not for the science, then for our own safety from them — another dichotomy to grasp.

But, like many such apparent opposing concepts in tension, they combine to make these places compelling, places we must visit. I’m very glad to be alive in a time to see such wonders, to know that so many more are out there to explore, and to be excited by the fact that we’re only just starting out.