“Multiple lines of independent evidence confirm that human activities are the primary cause of the global warming of the past 50 years.” — From the overview of the National Climate Assessment

The U.S. Global Change Research Program released its third National Climate Assessment today. This report is a huge and staggeringly comprehensive overview of climate change and its effects on the United States.

The NCA is different from the Intergovernmental Panel on Climate Change reports; the NCA is focused on the United States, while the IPCC work is global. Three hundred expert climate scientists contributed to the NCA report, and it was extensively reviewed before being released. Reviewers included people from federal agencies as well as members of the very prestigious National Academies of Science.

In other words, this report is legit.

The amount of information is actually a bit overwhelming, and I’m glad they broke it down into a series of sections. You can find out how the climate is changing; the effects of climate change on extreme weather, human health, water supply, the oceans; and the impact we already see.

It’s also very clear that climate change is being caused by humans. They go through how we know this, including showing that natural factors cannot account for the warming and effects we are seeing. They show this in an excellent graph:

The black line shows the global temperature change, clearly going up over the past few decades (if they showed it from even farther in the past, the rise would be even steeper). The green region shows what that expected temperature would be if only natural forces were at work. The purple region is what you expect from both natural and human factors. Clearly, without human influence the temperatures would be far lower, which means the problem is us. We’re doing this to ourselves.

Again, the report concentrates on what’s going on here in the United States:

U.S. average temperature has increased by 1.3°F to 1.9°F since 1895, and most of this increase has occurred since 1970. The most recent decade was the nation’s and the world’s hottest on record, and 2012 was the hottest year on record in the continental United States. … Temperatures are projected to rise another 2°F to 4°F in most areas of the United States over the next few decades.

This temperature change has profound and far-reaching impacts on essentially every aspect of human life and activity:

Sectors affected by climate changes include agriculture, water, human health, energy, transportation, forests, and ecosystems. … The United States produces nearly $330 billion per year in agricultural commodities. This productivity is vulnerable to direct impacts on crops and livestock from changing climate conditions and extreme weather events and indirect impacts through increasing pressures from pests and pathogens. Climate change will also alter the stability of food supplies and create new food security challenges for the United States as the world seeks to feed nine billion people by 2050.

A lot of what the report covers is familiar, if grim, to people who haven’t had their fingers in their ears for the past few years; ocean levels are rising, the water in those oceans is becoming more acidic, weather patterns are changing, we can expect more torrential rains in some locations and drought in others, and on and on.

Climate Change Is Hitting Where You Live.

The report is incredibly thorough, going through each line of reasoning, each thread of evidence, step by step. But I would say that the part of this report that is of most individual interest—that is, what you personally will want to check out—is the section on regional impact of climate change. Here, you can see how global warming will impact where you live.

I live in Boulder, Colorado, so I went to the section on the Southwest. I already had a pretty good idea about what I would find. Sure enough, the list was a dire roll call, including lower snowfall and streamflow, reduced yield of crops, and increased wildfires.

I can look out my window and see the first part. Even since I moved to Colorado just under a decade ago the reduced snowcaps on the Rockies is obvious. I don’t want to rely on anecdotes, but when I visited Boulder in the 1990s in June, the tops of the mountains had so much snow it actually confused me (being from the East Coast); I couldn’t believe there was snow in midsummer! Now, though, even by midspring the amount there is visibly lower. My experience and observations match what the report shows.

Wildfires, like temperatures, vary year to year, and it can be hard to spot a trend. But shifting rain, less snow, and warmer temperatures all add up to the obvious. Here’s something you may not have known: increased temperatures have affected insects living in the forests on mountains. Many insects have their life cycles tied to the seasons; hatching, eating, breeding, and dying all in a few months. Now, however, with warmer temperatures lasting longer, some insects go through two complete cycles of this in one summer. Many of these insects are pests, eating bark and killing trees. A larger area of dead trees means that much more kindling for wildfires. Again, this is obvious to anyone who has driven through western Colorado. 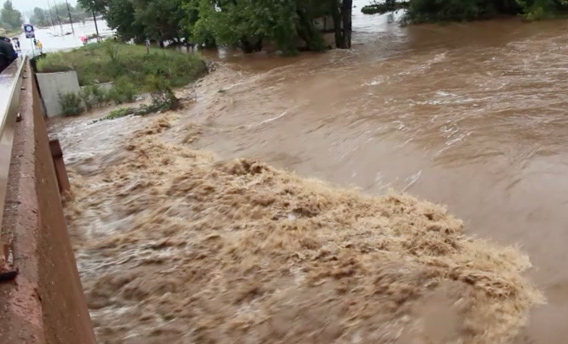 Ironically, this can all lead to catastrophic flooding as well. Insect damage and wildfires remove trees and plants that help the soil’s ability absorb water. If there’s a heavy rain—and as the report indicates, climate change can mean longer periods of no rain punctuated with very heavy storms—that water runs right down the hills instead of getting absorbed. Last year, I spent an extremely long and scary night frantically bailing a lot of water out of my basement, wondering if Boulder was about to be washed away by a catastrophic flood. I do not wish to go through that again.

The individual effects of climate change can be layered, even subtle, but they add up.

The Impact of Impact

As for the impact of this report, well, we’ll see. I know there is a section of the population that will deny global warming exists right up until the point when coastal cities are underwater. Unfortunately, many of these people are in Congress, and control what we can and cannot do. I know this report will have little influence on them; they have made their firm denial of reality clear. Not only that, but the usual suspects have already been up to their usual shenanigans about the report.

What concerns me greatly is the upcoming election in November. Many people are predicting the Republicans—who overwhelmingly deny climate change even exists; it’s become something of a party plank on the right—may take control of the Senate. If that happens, then you can bet your life’s savings nothing will happen about climate change for at least the next two years.

And we cannot afford to wait even that long.

As the IPCC and NCA reports show, climate change is the single biggest challenge facing us not just as a country, but potentially as a species. The science is more than clear, the effects are already all around us, and the future will only make those impacts more obvious.

Go read the report; see what’s really happening. We can make a difference. Keep that in mind this November.