How to make a moon of Neptune: Whack another moon REALLY hard.

Neptune is the farthest major planet from the Sun, and difficult to study. Even though it's big, about 50,000 kilometers in diameter, it's just so far away that details can be lacking. Heck, even going there, like we did with Voyager 2 in 1989, didn't solve all its mysteries.

But it did provide clues for a big mystery that cropped up later: What's the deal with Neptune's dinky moon Hippocamp?

It is a tiny moon, just 35 km wide, and it was discovered by accident! Like the other three big planets in the outer solar system, Neptune has rings, or more accurately ring arcs, like pieces of rings. In 2013, astronomer Mark Showalter was looking for such arcs in Hubble images taken in the mid-2000s, and used clever software that remapped the images so that the rapidly moving arcs would appear stationary, so they could be easily compared in different images.

Just because, he decided to apply that same software to objects outside the rings, orbiting more slowly, and Hippocamp popped out in the images. It's a cool story, which I wrote about at the time.

Hubble image of Neptune (from 2009) inset to scale with an image of its much fainter moons and rings. Credit: NASA, ESA, and M. Showalter (SETI Institute)

Hippocamp is so small and dim that Voyager didn't even see when it flew past the giant planet 30 years ago (to be fair, Voyager wasn't looking carefully for moons that far out), and barely shows up in the Hubble shots. But it didn't take long before something really odd turned up: When astronomers calculated its orbital characteristics, they found its orbit lies just 12,000 km inside the orbit of Proteus, a much bigger moon shaped like a round(ish) potato 400 km or so across.

That's a problem, because Neptune's system of moons is a mess, and was once much messier. A moon forming where Hippocamp is now shouldn't be able to exist there.

Here's where things get really cool: Hippocamp may have been born when a comet whacked Proteus hard, and the debris then came back together to form Hippocamp!

Let's wind the clock back, oh, say, a few billion years. Neptune probably formed with a system of moons; most planets do. But then disaster stuck: A huge ice-and-rock object from the outer solar system wandered too close to Neptune. Somehow — different ideas abound — this large body got captured into orbit around Neptune. We now call this object Triton, and it's Neptune's biggest moon by far at 2,700 km in diameter.

A mosaic of Neptune’s moon Triton created from Voyager 2 images during a flyby in 1989.  Note the black streaks near the bottom; evidence of geyser-like eruptions and wind. Credit: NASA/JPL/USGS

The big clues that Triton was a captured moon instead of forming with Neptune is that 1) its orbit is tilted with respect to Neptune's equator (big moons that close in should orbit aligned with their planet's equator), and b) its orbit is retrograde, backwards when compared to the other moons (and Neptune's spin). Moons that form with their planets should have prograde orbits, moving in the same direction as their planet's spin (in general, that spin is counterclockwise as seen looking down from the north). Triton is so big that if it formed with Neptune it must have moved prograde. Since it doesn't, it must not have formed with it, so therefore it must be captured.

This event caused chaos in the Neptune system. Triton's orbit was likely initially highly elliptical, and became more circular with time as it interacted gravitationally with Neptune. The physics is a bit complicated, but the gravity of Triton raises tides in Neptune, and that causes Triton's orbit to shrink and become more circular over time (usually tides cause moons to move outward, but that's only for prograde moons like our own Moon; Trtion is retrograde so the physics works the other way, and it moves inward).

The orbits and sizes of Neptune’s moons, including its ring arcs. The orbits of Proteus and Hippocamp are extremely close. Credit: NASA, ESA, and A. Feild (STScI)

As Triton settled down it would've thrown the inner moons of Neptune into disarray. These moons were so disturbed in their orbits they would've smashed into each other, creating a huge ring of debris around Neptune. Over time that coalesced into smaller moons which orbited Neptune close in, inside the rings.

But this tale of destruction isn't quite done. There are lots of icy bodies out there past Neptune, in a region we called the Kuiper Belt, and they can impact those smaller moons. It's likely they've been whacked and recoalesced over and again since they initially formed billions of years ago.

The only moon to survive this maelstrom was Proteus. It's the outermost and largest of the inner moons. Due to the same gravitational dance that moves Triton inward toward Neptune, Proteus (being prograde) is moving away from Neptune.

But — and this is the big but ­— Proteus is outside the orbit of Hippocamp now. That outward migration of Proteus would've moved it right through Hippocamp's orbit, and that should've caused Hippocamp either to collide with Proteus and be destroyed, fall into Neptune and be destroyed, or be ejected from the system altogether. No matter how you slice it, Hippocamp shouldn't be where it is! What's it doing there?

The astronomers studying this came up with a solution: Sometime after Triton became a moon of Neptune, a Kuiper Belt object came in and whacked Proteus. This blew off a huge amount of debris, and this stuff coalesced to form Hippocampus orbiting Neptune inside the orbit of Proteus. Being so small, Hippocampus can't migrate outwards (it doesn't raise big enough tides on Neptune), so it wound up staying inside the orbit of Proteus, and that's the way things remain today.

I have to say that must've been one heck of an impact on Proteus that so much debris would make a moon over 30 km across. That would leave quite a crater… 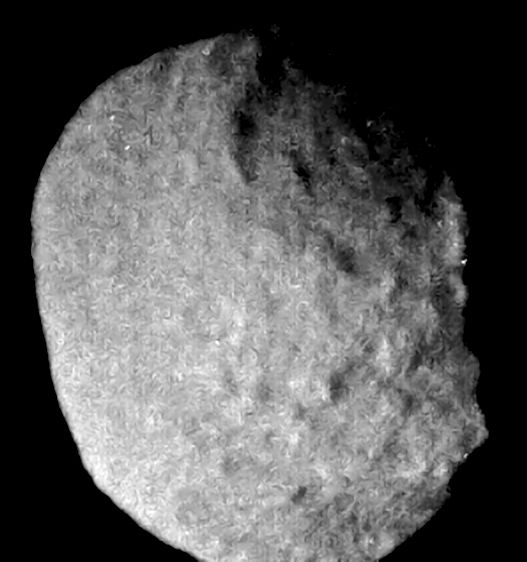 An image of Neptune’s moon Proteus, taken by Voyager 2 in 1989. The huge crater Pharos can be seen to the upper right. Credit: NASA/JPL-Caltech/Kevin M. Gill

… which we think we see! During the 1989 pass by Voyager 2, it took an image of Proteus that shows a monstrous crater named Pharos, and it's a whopping 230 km wide! Had the impact been much harder it would've shattered the moon. As it was, the debris blown off would've been very impressive. Big enough to form a whole other moon, in fact. Hippocamp.

That's so cool! I love it when a story hangs together like this. Everything works out logically, even when it starts with a weird fact that doesn't fit.

And I can't leave this without mentioning something. By practices enacted by the International Astronomical Union, moons of Neptune must be based on Greek mythological beings associated with water or Poseidon. Triton was the messenger of the sea (and son of Poseidon), for example. Proteus was also a son of Poseidon in many myths, but also one who could change his shape at will (possibly tied to the idea that the sea conditions can change very rapidly).

That certainly fits with what we know! Those moons have changed shape many times, including Proteus, and the latter certainly did when Pharos formed. That's a fun little coincidence.

Incidentally Hippocamp is a sea monster that's the upper half of a horse and the lower half of a fish. That's harder to fit with modern knowledge of the moon itself (it's too small to discern its shape even with Hubble). But it's still neat.

I find all this amazing. We used to think the solar system pretty much looks now like it always did, but in recent years we've figured out that it really, really doesn't. Moons move to and fro, planets migrate inward and outward from the Sun, and giant impacts not only reshape these bodies but spawn new ones. It's only over our short lifespans that things seem stable. On the long scale, the solar system is as dynamic and tempestuous as the sea.