Important Toy News: These Bob's Burgers toys are delightful, but Chucky is terrifying

Welcome back to Important Toy News, the SYFY WIRE column that will have you blood-bound to the toy-collecting lifestyle. Join me, your resident toy journalist, as we discover new toys, drool over vintage ones, build our eighth model kit this week, and justify that we’re supporting the economy with every giant robot we purchase. So climb aboard the hayride, my haunted pre-Halloweeners, and hope that the Great Pumpkin buys everything on your gore-list, because we’re going to indulge in some spooky toys this week! Let’s kick off with some horror board games, shall we?

This past summer, nearly 45 years after the iconic shark drove millions out of the water, Ravensburger has reimagined Jaws as a suspenseful board game that pits Chief Brody, Quint, and Hooper against the shark. Jaws features a special, double-sided game board that’s played in two acts. In Act 1, the humans must protect Amity Island while the hidden shark tries to silently devour swimmers. If the shark devours nine swimmers or Chief Brody, Quint, and Hooper successfully tag the shark with two yellow barrels, Act 1 is complete, and the board is flipped over. In Act 2, the humans try to defend the Orca boat while the shark rips the boat apart piece by piece. Short on time? You can play either act as a stand-alone game. It has an MSRP of $29.99 and is available at Target. 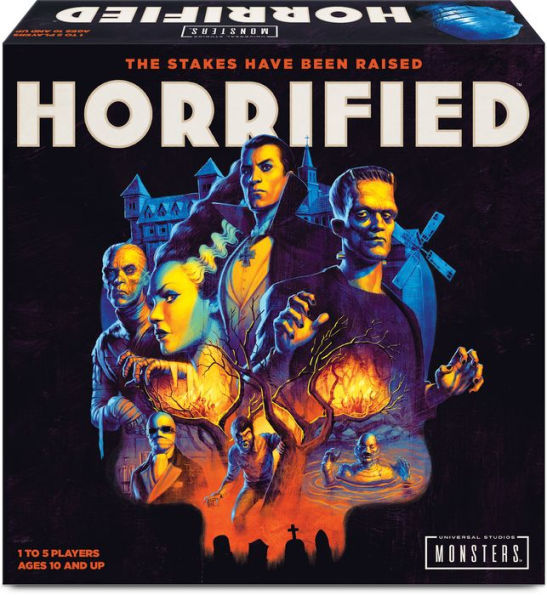 Another frightfully haunted game for the upcoming season is Horrified: Universal Monsters. The game, which came out last month, is an exciting romp that’s here just in time for the spooky season. Ravensburger raises the stakes and brings spine-chilling fun to your table with this one. Strategy is key as players band together to defeat all of your favorite classic (and nearly 100-year-old) monsters, including Dracula, Frankenstein's Monster, the Bride, the Mummy, the Invisible Man, the Wolf Man, and the Creature From the Black Lagoon. Fans of classic horror movies or clever strategy tabletop games will all enjoy a chance to play the heroes against some of the biggest monsters of all time. Plus, for the collector or hobby crowd, the player pieces are high-quality crafted miniatures that can be painted. It costs $34.99 and is available at Amazon.

Now for the toys! Vinyl mini toys, to be exact. Available from Kidrobot and Bob’s Burgers are a whole new line of vinyl mini-figures to get you in the Halloween spirit. Following up on the success of mini-series 1 and 2, the Kidrobot x Bob’s Burgers Trick or Treating Tour series brings a delicious costumed extravaganza from fan-favorite Halloween episodes spanning the entire show’s run. Bring home Tina the Sand Witch, Cheriff Linda, No Country for Louise, Nurse Teddy, and the rest of this spirited bunch and complete the Bob’s Burgers 3” mini-figure collection. You can collect them all right now from Kidrobot. A vinyl figure of Louise dressed as the Dragon With the Girl Tattoo costume is also available here! 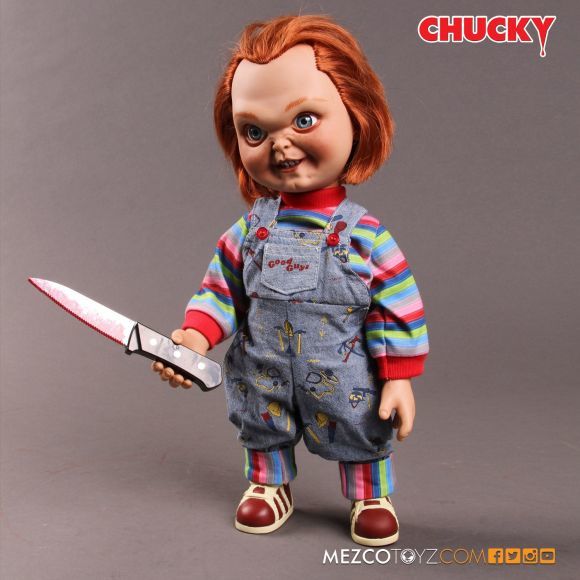 You guys like horror movies, right? Good, because 'tis the season for Child’s Play Chucky dolls. And trust me, these little suckers are in full swing. Mezco Toyz is showing off its newest creation, a 15-inch, talking, sneering Chucky doll, and he is your friend till the end. Unlike the scarred and battle-damaged look Chucky normally bears (people have tried to destroy him in six films so far), this version represents the cleaner, earlier Chucky. His trademark outfit is un-slashed, his face is not yet mauled. Chucky has an MSRP of $94, is available to preorder now, and will ship February-April 2020. 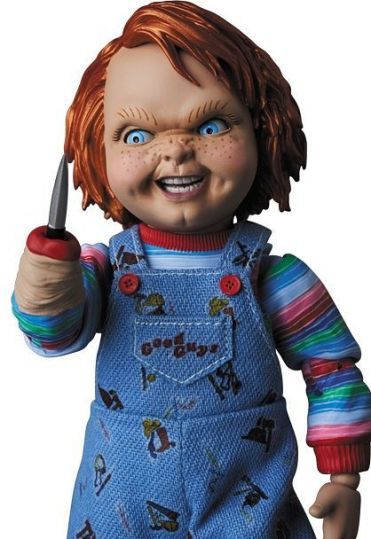 Want to see what Japanese toymaker Medicom Toy (creators of the MAFEX line) is doing with its Chucky doll? Lovely, because this one is awesome-looking! From the second installment of the Child’s Play series, the Good Guys figure joins the MAFEX lineup. Standing just over 5 inches tall, the Good Guys figure is highly articulated and features a set of real fabric clothes. He costs $85 and can be preordered today from HobbyLink Japan. In addition to having two, maybe three different faces, he comes with his hands, as well as a spike from when his hand is cut off. Chucky also has a bat, a hammer, a knife, a ruler, and a non-limbed spike. So you’re really getting a lot of murder for your money.

We have one more spooky toy in line before we make the leap into pop culture toys, and we’re going to wrap up the horror with NECA Toys’ new figure from '80s cult film Nightbreed. NECA showed off some in-packing photos of the maniac killer Decker from Clive Barker's film. This 8-inch Cloth Decker Action Figure has a ship-to-retail date on Oct. 15. It is really nice to see something from Nightbreed coming out.

NOT QUITE AS SPOOKY TOYS

Yes, I know I said we were going to keep it scary this week, but the really scary thing would be not showing you these awesome glorious toy beauties. No, no — you deserve to see greatness. And few things are greater than one of my favorite films of all time, The Iron Giant. The coolest giant robot with a heart is now a Mondo soft vinyl figure! In collaboration with Unbox Industries, this figure features 10 points of articulation and stands 10.5 inches tall.

There are three varieties, and they are all available for preorder via mondotees.com. The variations cost $80, $85 (the eyes are different) and a bright blue color variant with Japanese text that reads "Iron Giant" that costs $150 of robot fun.

Storm Collectibles is one of my favorite toy brands, and they’re showing off something really neat here. From Injustice, they’re bringing DC fans a badass Lobo action figure. Lobo was born on the utopian planet of Czarnia. Unfortunately for them, the foul-mouthed brawler’s idea of a perfect world is one covered in bruises and blood. He wiped out his entire civilization and made himself the last of his people. Considering his name means "he who devours your entrails and thoroughly enjoys it" in his native tongue, perhaps they shouldn’t have been too surprised. Lobo took his predilection for murder and mayhem along with his rocket-fueled motorcycle and went on to become the best bounty hunter in the galaxy. No price point has been announced yet, but in Storm Collectibles fashion, it will likely cost $75-$95. 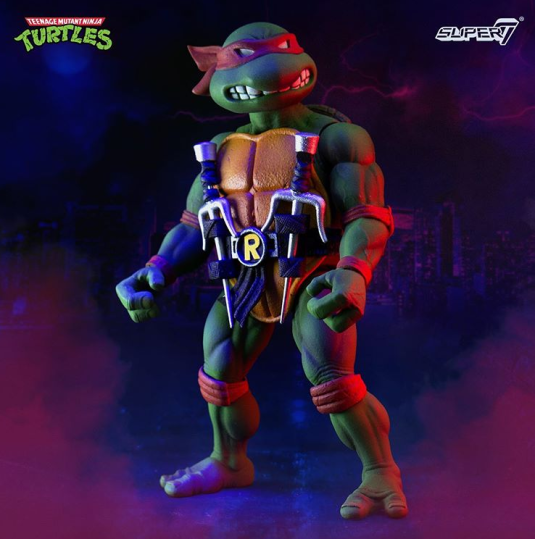 We’ve reached the end, my toy-collecting friends, and what better way to wrap it up than with some heroes in a half shell? Check it out, dudes and dudettes: Super7 just released images of its Teenage Mutant Ninja Turtles Wave One series of action figures. Preorders will start Oct. 1 and close on Halloween. The first wave includes Raphael, Splinter, Baxter Stockman, and a Foot Soldier. All of them are really nicely detailed and painted, and come with many extra accessories. Just the number of accessories and extra hands with each toy tips me off that this will likely be another wave of $45 action figures, much like the Thundercats toys that Super7 recently revealed. These are 7-inch figures, which, trust me, is more toy than you think. The NECA Toys turtle line are also 7 inches, and it’s a lot of toy. There will definitely be people out there saying that between the NECA Turtles and the Playmates reissues and re-releases, how many versions of the original '90s toys do we need? As many as they'll make, thank you for asking.