Hailing from the Miami diaspora, Joamette Gil is a queer Afro-Cuban cartoonist, illustrator, publisher, and writer. She is best known for creating Power and Magic Press, which has published award-winning comics anthologies for queer and people of color comics creators, especially queer people of color.

Gil has illustrated and written comics since 2012, her work appearing in places such as the anthology Puerto Rico Strong and websites like The Nib. She has also curated comics creators in online lists like Angry Latinxs United and The Comics Workshop.

Your comics have been featured in places such as Everyday Feminism, the original Power & Magic anthology, and the recent anthology Puerto Rico Strong. What influences your art style and storytelling as a cartoonist?

My art style fluctuates a bit, but I'd say my primary influence is animation (including Disney animation, anime, and more modern styles like on Cartoon Network) — basically characters made up of clean lines and basic shapes. I'm attracted to symmetry and balance in my compositions as well as in stories: beginnings that mirror their endings, out-of-control forces finding control, lost elements finding their place, and so on. When the content is educational nonfiction, I like to break concepts down as minutely as I can to help the audience reach a better understanding of something they may have only vaguely grappled with before.

How did you start Power & Magic Press?

Back in 2016, just a few days after my birthday, I put out a call for submissions on Tumblr and announced that the anthology we'd be making would be under the imprint "Power & Magic Press." I'd had the phrase "power and magic" tucked away for many years because I felt it neatly encapsulated everything I like in my media (well-explored dynamics between people across positions of power, set within speculative fiction).

There wasn't much more to it than that, to be honest! I knew how anthologies worked because I'd been in a couple, and I knew how to crowd-fund through Kickstarter because I'd watched so many of my favorite creators do it a million times over the years. All of the information for being the change we want to see is out there, especially if the change you want to see is in a medium as accessible as comics. With each successive campaign, I refined my process based on things that could have gone better the previous time, and each title found more success than the last.

In your new comics anthology Heartwood, the theme of entering and leaving a forest transformed is prominent. In a way, many of these comics are reminiscent of fairy tales. Why did you use the forest as the setting for this anthology?

Heartwood is an anthology by and about non-binary people, and I know that, both for me personally and a lot of other folks too, it's safe to say that "lost in the woods" is a fair way to describe being non-binary. That's not to say that we don't know who we are, but that so few of us are given any sort of road map for what our genders are or how we should be that gender. (The twist is that all genders are constructed, but I digress...) The fairy tale symbolism of a person leaving everything they understand behind, having to find a new meaning to themselves in a new context — that concept is very near and dear to me. It's empowering, and it's resonant to anyone who's found that they don't fit into the common structures around them.

Well, first, I tried looking up other non-binary comics anthologies to make sure I didn't accidentally pick the same name as an existing project; that's how I learned there weren't any (at least none with an online presence)! After exhausting my follow lists, friends-of-friends connections, and free resources like MariNaomi's Queer Cartoonists Database for leads, I decided to Tweet out a survey for any and all non-binary cartoonists to fill out. This was well before announcing that there would even be a non-binary anthology from P&M Press. I wanted to get a feel for who was out there that I didn't already know about, especially looking out for non-binary POC. Guess what — there are a lot of us! Hundreds of folks filled it out, and from there we chose a few creators to invite to get the ball rolling and build excitement for the project. From start to finish, we felt a lot of love and support for the anthology — from contributors, from our previous backers, from new followers on social media, and from fellow anthology editors. 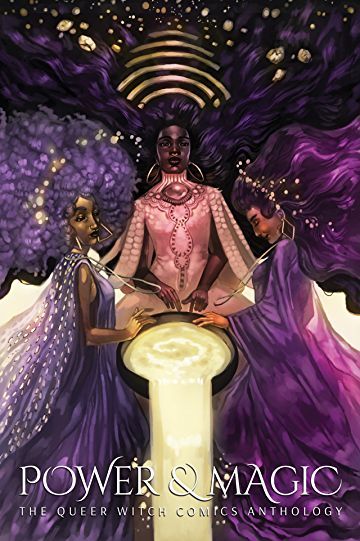 Your award-winning flagship anthology series is called Power & Magic. Tell us what this series is about.

Power & Magic: The Queer Witch Comics Anthology collects short fantasy comics by women of color and woman-aligned, non-binary POC. Every story is about queer witches of color running the gamut from romance, comedy, tragedy, adventure — you name it. The core of the series is the symbolism of rebellion, transcendence, healing, feminine monstrosity, deviance, and interconnectedness attached to witches. So often, a "witch" was any woman embracing her authentic self, rejecting social obligations. I relate to that as a queer woman of color who always had to hear that there was "something wrong" with me, for no other reason than that I didn't fit a certain "womanly" ideal.

Absolutely! In fact, we're currently open for submissions for the next Power & Magic until March 10.

If you could work on any comics project, what would it be?

You know? I feel like I'm already working on the comics projects that I want to work on more than anything! Not just the witchy and non-binary anthologies, but the projects that I can't even talk about yet. I guess as a pie-in-the-sky, fun wish: I would jump at the chance to write Legend of Korra. I have some powerful... feelings... about politics in that series!