Get your blindfolds out of storage, folks. A sequel to Bird Box is on the way from author Josh Malerman and we can already feel our tenuous grip on reality beginning to slip. Arriving next month, Malorie builds out the post-apocalyptic world of the 2014 novel, which led to Netflix's hit film starring Sandra Bullock.

Twelve years after she found refuge at a school for the blind with her son, Tom, and adopted daughter, Olympia, Malorie Hayes must make a life-altering decision. Will she once again brave a world overrun by madness-inducing creatures (entities that cause a person to commit suicide) after receiving news that someone very dear to her might still be alive? Just as many viewers have the Netflix movie to thank for introducing them to the source material, Malerman has it to thank for pushing him to write a follow-up installment.

"My fiancee [Allison] and I watched the movie at Netflix headquarters, and at the end of the movie, I was like, ‘Man, I want to know more about Malorie and I wanna spend more time with her,'" he recounts to SYFY WIRE. "Malorie, for whatever reason, has been the easiest, smoothest character I have ever written. She’s the most relatable, I think. I almost see her as a twin sister, as if she’s behaving in the Bird Box world exactly as I would’ve behaved."

Despite the fact that the writing process on Malorie was "very fluid," Malerman still had some tough nuts to crack when it came to expanding a universe in which no one can actually look at the world around them. When the story picks up, Malorie, Tom, and Olympia are now living at a defunct Jewish summer camp in Michigan, completely isolated from the rest of humanity (or what's left of it).

"Considering how scary and how out of nowhere the scenario itself was, the arrival of these creatures, 10 to 12 years later, it’s not like everything is gonna be back to normal," the author adds. "Are these things still here? And if they aren’t still here, how are you gonna be told? And if you are told, how are you gonna trust that person? What you end up with, and this is how fleshing out the world becomes difficult, is you’re in an isolated scenario.

"It’s different than, say, Lord of the Rings, where you’re literally world-building constantly as you go," he continues. "By nature of the scenario and the blindfold, Malorie’s only gonna experience this world in bits and pieces. That’s a challenge, but that’s also, as [a] horror author, kind of something special to toy with."

Naturally, our conversation turns to the pandemic, which — like the unexplainable beings in Malerman's novels — has forced us all inside. And if we do brave the outdoors, we must don face coverings before leaving the house. Scarily prescient in certain ways, Malorie amplifies the fears of Bird Box tenfold, portraying the titular character as thoroughly paranoid, especially when it comes to being around large groups of people. She refuses to remove her blindfold (now a sort of religion for her) under any circumstances and orders her children to do the same.

"The weirdest part about it is that with Bird Box, a reader might've said, ‘Hey, nobody would ever walk around outside without their mask,’" Malerman explains. "And then here we are, seeing people do that and you’re like, ‘Wow, people really will [flout safety rules].’ In a pandemic situation, there really are people who are like, ‘This isn’t real. F this.’ It’s really happening in real-time. That’s the part of it that’s most chilling."

Even so, the writer is "hesitant" to draw any comparisons between the fictional world of Bird Box and the harsh realities of the COVID-19 health crisis.

"This is no joke, we’re all in lockdown," he continues. "I’m careful to draw any lines between the two because what’s happening is so serious and for some people, tragic. And meanwhile, Bird Box and Malorie are supposed to be pee-your-pants scary fun. I don’t know if it’s supposed to be ‘fun,’ but it’s supposed to take you somewhere, like a thrill ride or something."

As if to underscore that point, the author explains that Bird Box was never meant to channel pandemic or post-apocalyptic fiction. Rather, it drew more from Arthur Machen (The Great God Pan), Rod Serling (The Twilight Zone), and the religious concept of "God is infinite" (i.e. whatever you do, don't look at the Ark of the Covenant).

"When I first wrote Bird Box, I didn’t quite see it as end times," he says. "I saw it more as 'The Monsters Are Due on Maple Street,' where you’ve got one street, one house, [asking] 'Is something coming? Is it not? Is this psychosomatic?' That kind of thing... It wasn’t necessarily pandemic fiction, but it was that isolated scenario where townsfolk or a street of people, or even just a house of people or family [like] 10 Cloverfield Lane. What a concept. It’s like, ‘Hey man, I saved you guys from what’s up there.’ It’s like, ‘Wait, is there anything up there?’"

That sense of ambiguity ties back to Malorie, Tom, and Olympia leaving their comfort zone — a place that's as close to home as they may ever find — for the first time in over a decade.

"For all they know, and for all anyone knows, the creatures are gone," Malerman teases. "For all they know, they’re the last three people on earth. They don’t have any way of knowing these things and that’s partly the excitement of writing that because the minute they step out of the camp, it’s all unknown. The creatures themselves are unknown and any scenario they run into is unknown."

While many of us have been hasty in comparing the Bird Box creatures to the Elder, Outer, and Great Old One deities of the Lovecraftian mythos, the author wasn't necessarily looking to put his own stamp on that canon, although it was obviously a subtle inspiration.

"The idea of infinity personified and infinity on the porch swing at your house; you walk outside to get the mail and look, there’s infinity at your door... that’s a very scary idea," he explains. "That concept harkens more to me, like if you look upon the face of God, or if you try to fathom where time began. We’re incapable of processing that and, to me, is the exciting diving board for both Bird Box and Malorie. Sometimes, I think that Lovecraft is given providence over that entire infinity range [concept]... He’s the king of, ‘It was indescribable, unnameable, infinite.’ But there are many scenarios in which infinity is scary to us."

For nearly two years, fans have debated over what the creatures actually look like. Are they octopus-dragon hybrids like Cthulhu? A teeming mass of protoplasmic goop like the shoggoths of Antarctica? Or are they something so foreign that puny human diction cannot even begin to describe them? Malerman does have an answer for us, but you probably won't like it.

"I feel like every time I give this answer, it implies that I don’t respect you or something," he says. "But I’m just gonna give the same answer that I’d give if I was running for office, which is: I know as much as Malorie knows. I don’t even want to answer whether or not I had an image in my mind."

But that's the beauty of it. The ongoing discussions about the story have turned Bird Box into an iconic (and highly meme-able) piece of pop culture. It's an absolutely mind-boggling achievement for Malerman, who was old enough to appreciate the success without having it all go to his head.

"You’re seeing everyone in the world suddenly knows Malorie and knows Sandra Bullock as Malorie and knows the blindfold," Malerman continues. "I’m seeing memes per day about the pandemic and Bird Box and it was on TV shows and it’s mentioned on dating websites. 'Bird Boxing' is when you go on a blind date. It’s bananas... Because I’m 40, I think that I have some perspective on that that says, ‘This is wonderful. This is amazing. Let’s just write another book.’ Rather than, ‘I’m gonna smoke a cigar and lean back into the success of Bird Box.’ Oh my god, no way. I have a million other books to write. Let’s just keep doing what we’ve been doing and let’s be really grateful for what happened, but let’s roll on."

In terms of what the future holds for the author, Ridley Scott's production company is working on a television series based on Black Mad Wheel. Published in 2017, the novel follows a washed-up group of musicians who may hold the key to saving the world. Barnett Brettler has been tapped to pen the TV adaptation.

"I read the first draft of the script and it’s so good," Malerman tells us. "It was really huge, actually, like 190 pages or something. I loved it, everything was in there and it was so epic... I realized that this was probably gonna be too long, they’re probably gonna trim this down, but I want a version of this forever. So, I printed it up and I have it right here in my office, this giant stack of a script that he wrote. To be honest with you, I think it’s better than the book. I’m not even screwing around, I was like, ‘This is how it should go.’" 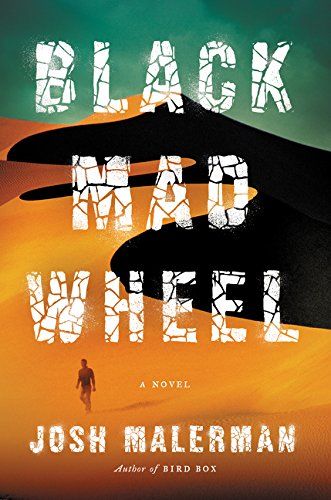 Beyond that project, "there are like six or seven other books and stories that are in play right now, whether it’s in development or optioned or being pitched or whatever it might be," the author teases.

While he's unable to comment on whether Netflix has scooped up the film rights to Malorie yet, it would be utter madness (like looking at a Bird Box creature kind of madness) to think that folks aren't working on it. In the meantime, we ask Malerman if there are plans to write a third book in the series. He reveals that there is a certain plot thread that ended up getting cut from both novels, so there's always the possibility of revisiting it for a new story with Malorie.

"Would I want to hang out with Malorie again? Yeah!" the writer concludes. "Remember, I wrote Bird Box in '06, so in Malorie, she must be around 40. There’s something I didn’t even mean to do on purpose, but Malorie’s been about the same age as me in my experience with her... I just realized halfway through Malorie, ‘Oh wow, she’s your age again.’ That’s kind of fun because then if there is a third book, maybe, I don’t know. There’s further to go, further life experience that I have that I can mirror in some ways through her."

Malorie goes on sale from Del Rey on Tuesday, July 21. You can pre-order a copy here.

It's a fan thing
Join SYFY Insider to get access to exclusive videos and interviews, breaking news, sweepstakes, and more!
Sign Up for Free
All Posts About
Features
Movies
Bird Box
Interviews
Josh Malerman
Malorie
books
coronavirus
You May Also Like
Recommended by Zergnet
Latest on SYFY WIRE