Providing a clear glimpse into the evolutionary tooth arrangement of early mammals living during the Age of Dinosaurs, a new research paper completed by Dr. Kai Jäger and his colleagues at the Institute for Geosciences at the University of Bonn and Oklahoma’s Museum of Natural History inspected the fossilized jaw bones and chewing capacity of a palm-sized mammalian predator known as Priacodon fruitaensis.

The international team was most interested in the nature of molar occlusion, jaw movement and morphology of this fierce little forager that measured in at roughly 8 inches long and weighed slightly less than 2 ounces.

It roamed the prehistoric wilds of what is now Colorado roughly 150 million years ago in the Middle Jurassic period. Their findings, published last week in the online journal Nature, showed that its dentition was well adapted for strong, precise biting, and had a varied faunivorous (insectoid and tetrapod animals) diet that likely included insects and small four-legged vertebrates. 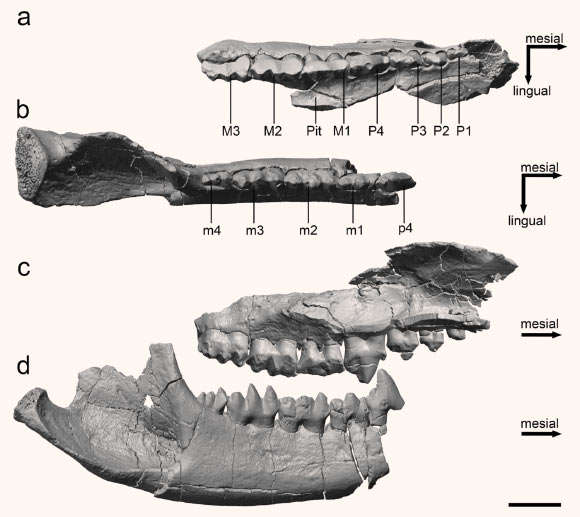 “Until now, it was unclear exactly how the teeth in the upper and lower jaws of Priacodon fruitaensis fit together. We have now been able to answer that question,” said co-author Professor Thomas Martin of the Institute for Geosciences at the University of Bonn.

Priacodon fruitaensis was first unearthed back in 1981 when jaw remains were discovered in Colorado's Upper Jurassic Morrison Formation. The aggressive creature belongs to the Triconodontidae family, an extinct category of early crown mammals (animals with molars) with a spotty fossil record spanning the Late Jurassic through the Late Cretaceous epoch.

This is one of the first instances of mammalian dental alignment adapting to optimize its food source, with rows of molars overlapping while biting and chewing, instead of striking each other directly one-on-one.

It's the same method used by modern mammals to break down food, and has remained an efficient model for millions of years, making it an important evolutionary marker for paleontologists which indicates a hybrid of carnivore and insectivore tooth structures.

“Its dentition must have made it easy for Priacodon fruitaensis to cut the flesh of its prey," explained Dr. Jäger. "However, the animal was probably not a pure carnivore: its molars have cone-shaped elevations, similar to the peaks of a mountain. Such cusps are particularly useful for perforating and crushing insect carapaces. They are therefore also found in today’s insectivores. However, the combination of carnivore and insectivore teeth is probably unique in this form.”

“The upper and lower jaws each contain several molars,” Dr. Jäger said. "In the predecessors of mammals, molar 1 of the upper jaw would bite down precisely on molar 1 of the lower jaw when chewing. In more developed mammals, however, the rows of teeth are shifted against each other. Molar 1 at the top therefore hits exactly between molar 1 and molar 2 when biting down, so that it comes into contact with two molars instead of one.We compared both options on the computer. This showed that the animal bit down like a modern mammal.”

Another distinguishing feature is the fact that nearly all the animal's molars were similar in size. But by fitting together like precision gears, any tiny change in the molars' cusp would have instantly altered the bite and reduced that perfect chewing partnership.

“This potentially made it more difficult for the dental apparatus to evolve,” Dr. Jäger added. “This type of dentition has in fact survived almost unchanged in certain lineages of evolutionary history over a period of 80 million years. At some point, however, its owners became extinct — perhaps because their teeth could not adapt to changing food conditions.”

It's a fan thing
Join SYFY Insider to get access to exclusive videos and interviews, breaking news, sweepstakes, and more!
Sign Up for Free
All Posts About
News
Science
Fossils
Paleontology
Related Stories

T. Rex and Triceratops frozen in combat may finally be telling the truth about a 67-million-year-old cold case