Like something straight out of a pulpy sci-fi horror flick, researchers at Tufts University and the University of Vermont (UVM) have engineered a new generation of living robots they call Xenobots, which demonstrate cooperative swarm activity while collecting piles of micro particles.

Last year, this same team of scientists and biologists created tiny self-healing bio-machines that exhibited movement, payload pushing abilities, and a sort of hive mentality. The blueprints for creating these biological bots, which technically aren't a typical robot or a catalogued animal species, but instead are more akin to a distinct class of unique artifact that acts as a living, programmable organism.

Xenobots are generated from stem cells and get their name from the African frog cells (Xenopus laevis) required to make them. Measuring less than 1mm long and comprised of 500-1000 living cells, Xenobots come in different basic shapes and can scoot themselves in linear or circular directions, join up to act collectively, and move small objects by harnessing their cellular energy for a maximum of 10 days.

According to a new paper published in the online journal Science Robotics, the researchers' latest project takes it one step further with their Xenobots 2.0 by building life forms that actually self-assemble a body from single cells, don't need muscle cells to move, and have shown the capacity of recordable memory. These next-gen Xenobots are swifter, can maneuver around different environments, have longer lifespans, and still have the ability to cooperate in groups and heal themselves if damaged.

"Our initial work showed that living robots can be designed in a simulator by an AI, and then built out of amphibian cells," study co-author and senior scientist Dr. Douglas Blackiston tells SYFY WIRE. "These original designs walked along using carefully placed muscle tissue.  In our current work we examined if beating tufts of hair-like structures, called cilia, could enable our designs to swim in water.

"This allows them to move much faster, and our follow studies will design the shape of the living robot to better control its behavior. Living robots are fully biodegradable, leaving no artificial components behind when they break down, and we think this feature will be important for a variety of environmental and biomedical applications in the future."

Blackiston explained that Xenobots are brought to life similar to traditional robots, but instead of artificial components to create forms and create predictable behavior, they use organic cells and tissues.

When compared to the first prototype Xenobots which were designed in a "top down" approach by manual placement of tissue and surgical manipulation of frog skin and cardiac cells to produce motion, the new-and-improved version of utilizes a "bottom up" approach.

Tufts biologists employed stem cells from African frog embryos, then allowed them to self-assemble and grow into spheroids, some of which sprouted those tiny cilia projections that undulate back-and-forth or rotate. These leg-like appendages allowed the team's new Xenobots to possess a repurposed source of faster movement.

"We are witnessing the remarkable plasticity of cellular collectives, which build a rudimentary new 'body' that is quite distinct from their default — in this case, a frog — despite having a completely normal genome," explained study co-author Michael Levin, Distinguished Professor of Biology and director of the Allen Discovery Center at Tufts. "In a frog embryo, cells cooperate to create a tadpole. Here, removed from that context, we see that cells can re-purpose their genetically encoded hardware, like cilia, for new functions such as locomotion. It is amazing that cells can spontaneously take on new roles and create new body plans and behaviors without long periods of evolutionary selection for those features." 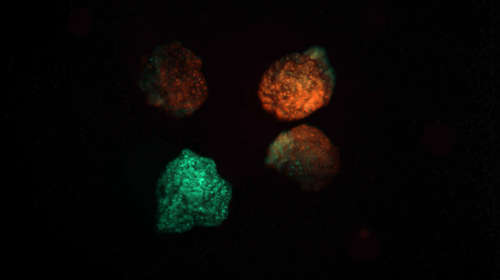 Tufts scientists also engineered their refreshed Xenobots with a clever read/write capability to record one bit of information by using a fluorescent reporter protein known as EosFP, which normally glows green.

However, when exposed to light at 390nm wavelength, the protein emits red light instead. Researchers tested this mnemonic function by letting 10 Xenobots swim around a surface where a spot is illuminated with a 390nm light beam. After two hours, they discovered that three bots emitted red light, while othere remained their original green, thus recording the "travel experience" of the living micro machines.

"The biological materials we are using have many features we would like to someday implement in the bots — cells can act like sensors, motors for movement, communication and computation networks, and recording devices to store information," said Levin. "One thing the Xenobots and future versions of biological bots can do that their metal and plastic counterparts have difficulty doing is constructing their own body plan as the cells grow and mature, and then repairing and restoring themselves if they become damaged. Healing is a natural feature of living organisms, and it is preserved in Xenobot biology."

It's a fan thing
Join SYFY Insider to get access to exclusive videos and interviews, breaking news, sweepstakes, and more!
Sign Up for Free
All Posts About
News
Science
Science
Technology
robots
Related Stories

Need a friend? Help's on the way, with eerily lifelike 'social robots' heading to market this year