The Red Planet’s pair of odd-shaped satellites named Phobos and Deimos apparently are getting a new origin story due to data acquired from fresh computer simulations and an investigation of seismic recordings received via NASA’s Insight mission.

In this new hypothesis, the two cratered moons were born out of the disintegration of a far bigger object somewhere between 1 and 2.7 billion years ago. Phobos and Deimos were initially found by the American astronomer Asaph Hall at the Naval Observatory in Washington D.C. on August 18, 1877.

The spud-shaped satellites circle Earth’s neighbor in synchronous rotation with peculiar inclinations of only 0.01 and 0.92 degrees when compared to the planet’s equatorial plane. 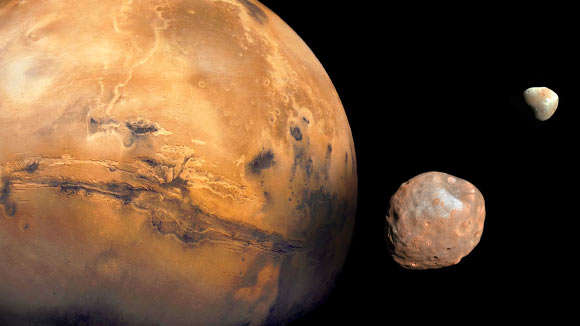 “Earth’s Moon is essentially spherical, while the moons of Mars are very irregularly shaped — like potatoes,” explained Amirhossein Bagheri, a doctoral student at the Institute of Geophysics at ETH Zurich. “Phobos and Deimos look more like asteroids than natural moons. This led people to suspect that they might in fact be asteroids that were captured in Mars’s gravity field.”

Per Bagheri’s updated assessment offered up in research recently published in the online journal Nature Astronomy, this is where the issues begin.

“Captured objects would be expected to follow an eccentric orbit around the planet, and that orbit would be at a random inclination; in contradiction to this hypothesis, the orbits of the Martian moons are almost circular and move in the equatorial plane of Mars. So, what is the explanation for the current orbits of Phobos and Deimos?”

While tackling this cosmic mystery, Bagheri and his team employed computer simulations and detailed seismic data taken from NASA’s InSight lander. Toss in a bit of temporal sleight-of-hand, and some revealing data was uncovered.

“The idea was to trace the orbits and their changes back into the past,” said Dr. Amir Khan, a researcher at the Physics Institute of the University of Zurich and the Institute of Geophysics at ETH Zurich.

“As it turned out, the orbits of Phobos and Deimos appeared to have crossed in the past. This means that the moons were very likely in the same place and therefore have the same origin.”

This is where is became apparent that a supersize satellite was orbiting Mars billions of years ago, and in a game of heavenly billiards, that ancient moon was likely bashed by another space rock as far back as 2.7 billion years ago

“Phobos and Deimos are the remnants of that lost moon,” Bagheri added.

Bagheri and his colleagues’ research also indicated that as Deimos slowly continues to ascend, Phobos will suffer a different  fate and is slated to smash into Mars in 39 million years or tidally break down into a scattered ring.

“The results stand to be improved with Mars InSight geophysical data, in particular the dissipation in Mars and its frequency dependence that control the orbital history of Phobos,” the scientists noted in their paper.

“The upcoming Martian Moons Exploration mission will also provide crucial information on the moons’ interiors, which will help to settle the question of their origin.”

Now that 'Lucy' is in the sky, what would it be like to take a ride on NASA's latest mission?

Which 'Obi-Wan Kenobi' characters could reappear?

‘Ms. Marvel’ gets some answers in Episode 4 recap