There are all sorts of weird phenomena lurking in the depths of the universe, but sometimes we don’t have to look much further than our own galaxy.

The Milky Way keeps revealing more and more anomalies. From strange signals to a disappearing flash of light whose source is still unknown, our cosmic backyard is proof that not everything which defies explanation is billions of light years away. Now a megastructure near the galactic core (which looks like a Magic Eye poster on steroids) is the latest thing to confound scientists. No, it’s not aliens, but what it actually is could be just as bizarre.

Whatever this megastructure is, it is made up of nearly a thousand filaments floating in space. How they ended up so equally spaced is positively eerie. Astrophysicist Farhad Yusef-Zadeh, who led a study recently published in The Astrophysical Journal Letters, and his colleague, astrophysicist Ian Heywood of Oxford University, who led an adjacent study that will soon be published in the same journal, have been investigating MeerKAT observations of the thing. What they found has only deepened the mystery.

“What we are presently seeing is just a snapshot of a complex system that is evolving under the influence of mind-boggling amounts of energy,” Yusef-Zadeh and Heywood told SYFY WIRE. “This is really an interesting discovery showing why the filaments are clustered and why they are regularly spaced.” 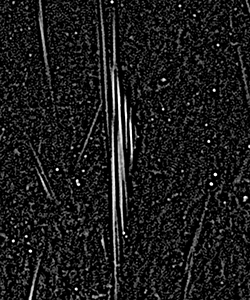 If those are the forces that cause supernova remnants to glow with radiation, then what lights up the filaments? The type of radiation is the same in both. What still has not been demystified is what causes the emissions and amplification of their magnetic field. Heywood, Yusef-Zadeh, and their team have been able to find out more about the magnetic field and electron energy of the filament structure through the spectral index, which measures how much the flow of radiation depends on frequency.

“The filaments show a steepening in their spectral index, becoming reddish in color analogy, in the direction away from the plane of the Milky Way,” they said. “This property also distinguishes the filaments from supernova remnants.”

Intensity of radio emissions varies depending on frequency. The frequency of a radio wave (or any other wave) is how many times it moves back and forth within a stretch of time. That still doesn’t give away where the filaments emerged form. They might have something to do with radio bubbles or our supermassive black hole, Sag A* (pronounced Sag A-star). What MeerKAT saw was that most of the filaments were trapped in bubbles, which could be a coincidence, but there are fewer filaments the further away you get from the galactic plane. That might be leading to something.

The density of electrons from the center of the Milky Way also goes down the further away you travel from the galactic plane. What backs up this similarity between the electrons and filaments is how the radio spectra of the filaments get steeper as their distance from the galactic plane grows further. It is also suspicious how these filaments only show up in the middle of our galaxy. It could mean their existence has something to do with the conditions there. But why are their magnetic fields so amplified?

There is still another unknown that the researchers are trying to make sense out of, and that is why they are positioned at equal distances. It might be related to their magnetic fields, but magnetic fields with similar structures can be found in other places, such as the Sun. It might be that, just like filaments on the Sun change with solar phenomena, these structures keep changing as more extreme things — such as stars exploding — happen. The megastructure is just so huge that it gives the illusion of doing nothing.

Yusef-Zadeh and Heywood are now trying to see if the filaments are so evenly separated because of unstable plasma surrounding them. This can only get weirder.

It's a fan thing
Join SYFY Insider to get access to exclusive videos and interviews, breaking news, sweepstakes, and more!
Sign Up for Free
All Posts About
News
Science
Interviews
Milky Way
SYFY Insider
space
You May Also Like
Recommended by Zergnet
Latest on SYFY WIRE