The Milky Way Crosses Its Heart … With a Galactic X

X marks the spot ... of a giant peanut-shaped structure in the center of the Milky Way galaxy. In this image the X is broad and blue. Credit: NASA/JPL-Caltech/D.Lang

You know how we know there’s a giant peanut in the center of our galaxy? Because X marks the spot.

That was a fun thing to write. It also has the advantage of being true.

Our Milky Way is a spiral galaxy, with a broad disk 100,000 light-years across filled with gas, dust, and stars. In the center is a bulge of older stars, which was once thought to be more or less spherical. In more recent times it’s understood to be what’s called a “bar,” an elongated shape more like a Tic Tac.

Barred disk galaxies are pretty common. When we see an external galaxy face-on the elongated bar is usually pretty obvious. When we see them edge-on, though, it’s harder to distinguish from a spherical bulge.

The most current map of the Milky Way is shown in an artist’s representation. The Sun is directly below the galactic center, near the Orion Spur. The Scutum-Centaurus arms sweeps out to the right and above, going behind the center to the far side. The maser observed is almost directly opposite the Sun from the center in the S-C arm, 65,000 light years away. Credit: NASA/JPL-Caltech/R. Hurt (SSC/Caltech)

We’re inside the disk of the Milky Way, so we see our galaxy edge-on. That’s made the central bar difficult to study in detail. Plus, all that gas and dust in the way is a pain, blocking our view.

NASA’s Wide-field Infrared Survey Explorer, or WISE, detects infrared light, which can get through that dust, so we can see the stars in the center of the galaxy more clearly. In a new study, astronomers found that the stars mark a huge X centered smack dab in the galactic core. That’s the image at the top of this article.

So, what the what? What’s this giant X doing there? A big clue can be found in older observations using the VISTA telescope in Chile. This revealed the stars in the galactic core are arranged in a peanut shape, a two-lobed cloud with a thick neck between them. If you were above the Milky Way, looking down, that peanut shape would just look more or less like an elongated bar, but from the side the peanut is more obvious. 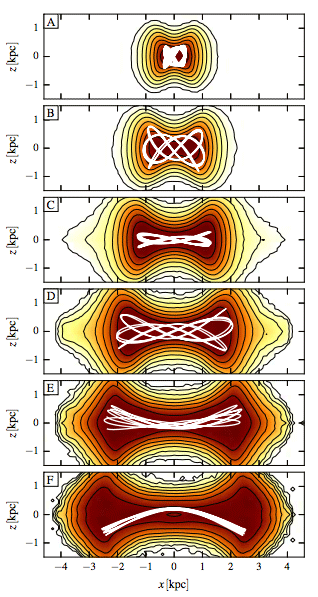 Photo:  Portail, Wegg, and Gerhard
It turns out the stars in that part of the galaxy don’t just orbit the center in circles like planets around the Sun. Instead, the overall gravity of the other stars in the bulge distort their orbits into weird shapes. Seen from the side, these orbits can look banana-shaped, or move up and down in complex patterns. Stars distributed all along these orbits trace out the peanut shape.

So why the X? That’s because the peanut is made of stars, and so it’s “transparent”; we can see stars all through it. When we look near the edges of the peanut we see more stars than when we look through the middle (an effect very similar to limb brightening). That’s what forms the X. Think of the two lobes like two cones tip to tip; the edges of the cones form an X. It’s the same sort of thing in the galaxy.

But there’s more! It’s hard to tell, but the two arms of the X are actually bigger on the left than on the right (this can be seen better in Figure 1 in this journal paper). That’s because that side of the peanut is closer to us! The center of the galaxy is about 26,000 light-years away, and the peanut is about 14,000 light-years long. Not only that, but it’s rotated away from us a bit; we see it nearly along the long axis but spun around by about 27°. That means the near side of the peanut is more than 10,000 light-years closer to us than the other side, making it look bigger. It’s pretty rare that we see such big structures close enough to us that perspective makes a difference in their size!

This has implications for the evolution of our galaxy. This structure is not terribly robust and would fall apart if we merged with another big galaxy; this means the Milky Way hasn’t suffered a large collision for many billions of years (we’re currently eating several smaller galaxies now, but those are far more gentle events—for us at least, not so much for the cannibalized galaxies). The dynamics of the stars in the bar also give clues to how they formed, and how they’ve evolved over the eons, too.

This is all pretty neat and shows that there’s still a lot we have to learn about our own neighborhood, cosmically speaking. A lot of this research depended on having the right tools for the job; specifically infrared telescopes to pierce the dust and powerful computers to calculate the very complicated orbits of the stars in the peanut.

Not only that but another advance that was critical to all this was … Twitter. Yes, seriously. One of the people working on this, Dustin Lang, created a website with the WISE images on it. He tweeted about it, and it caught the notice of astronomer Melissa Ness, who saw the X shape and realized what it meant, leading to their collaboration.

Astronomers are pretty good at rolling with the times. New tech and new techniques are part of the job. And when used wisely (har har) they can lead to some pretty beautiful insight into the Universe.