The Earth (upper left) and Moon (lower right) together, close enough to fit in a single frame from over a million kilometers away.  Credit: NASA/Goddard/University of Arizona

In September, the OSIRIS-REx spacecraft flew past Earth on its way to the asteroid Bennu. It did this to steal a wee amount of orbital energy from our planet and use it to change course for a rendezvous in late summer 2018.

This Earth flyby was on September 22 and, at the time, I posted a lovely color shot OSIRIS-REx took of Earth. But it has more than one camera onboard, and took a bunch of images with them as it passed. The purpose was to test out the cameras and systems and make sure they will perform on point once the mission reaches Bennu. So they took images at different distances from Earth to mimic the approach to the asteroid.

Of all the images, this is the one that struck me the most:

OSIRIS-REx's view of the Earth and moon from over 5 million km away. Credit: NASA/Goddard/University of Arizona

That's us. Here. That's home: The Earth on the left, and the Moon on the right. On October 2, 2017, OSIRIS-REx was a little over 5 million km away from Earth when it used its MAPCAM instrument to take this (actually a combination of images using red, green, and blue filters to mimic how our eyes see light). MAPCAM is a medium-resolution telescope that will be used to map features on the surface of Bennu, but, in this case, it works pretty well to image an entire planetary system.

A few days earlier, when the spacecraft was closer to us, it took this similar (though grayscale) image:

The Earth (upper left) and Moon (lower right) together, close enough to fit in a single frame from over a million kilometers away.  Credit: NASA/Goddard/University of Arizona

The spacecraft was about 1.3 million kilometers from Earth and 1.2 million from the Moon when it took this image, far enough that it could fit them both in one shot. In this case it used one of the two NAVCAM cameras on the Touch-and-Go Camera System (TAGCAMS), designed with a wide field of view to see stars in the background of Bennu during approach and aid navigation. The resolution of the NAVCAM is lower than MAPCAM, which is why the image is similar to the color one even though it was taken closer to us.

From this closer distance, the Earth was about the same size as the full Moon appears in our own sky. If you were sitting on OSIRIS-REx, you could have covered the Earth with one finger held at arm’s length.

Looking at his photo, something occurred to me. Try this: In the picture, look at the Moon. Now, do two things at the same time: Say, “One-one-thousand, two” like you’re counting seconds, and slide your gaze to the upper left so that it lands on Earth right as you say “two.” Seriously, try it.

If you did this correctly, your gaze was moving at the speed of light. The Moon is 400,000 km from Earth, so it takes light about 1.3 seconds to get from there to here. How about that?

In those images, the Earth is small, and it’s hard to see detail. But when it was only 110,000 km out, OSIRIS-REx took this image of Earth that should help:

OSIRIS-REx took this image fo Earth from 110,000 kilometers away, after a flyby to change its trajectory. Credit: NASA/Goddard/University of Arizona/Lockheed Martin

Yeah, that’s Earth, all right. It’s not as high-res or as nice as the color one taken 60,000 km later, but it’s still pretty cool. See the United States to the upper right? Most of what you’re seeing in this image is Pacific Ocean, which is ridiculously big.

But the spacecraft took another shot on its way out that also made me smile. Recognize this little world? 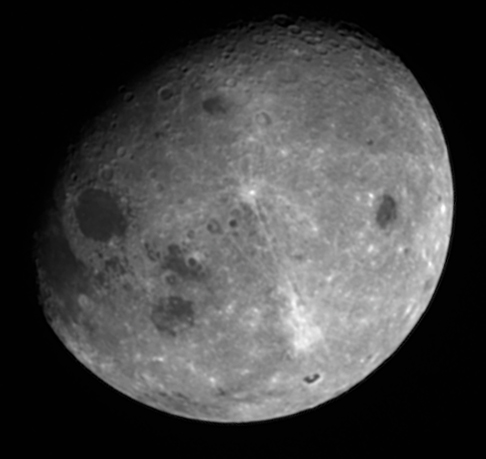 The Moon from 1.2 million kilometers away shows a large amount of the lunar far side, hidden from Earth. Credit: NASA/Goddard/University of Arizona/Lockheed Martin

Of course, that’s the Moon. But it looks a bit funny, doesn’t it? That’s because by the time it took this image from 1.2 million km away, OSIRIS-REx had moved far enough to be able to see quite a bit of the Moon’s far side, the half always pointing away from Earth. On the left of the image, you can see some of the familiar landmarks on the surface, like the circular Mare Crisium (Sea of Crises) that’s on the Moon’s northeast face as seen from Earth. But the Moon’s far side doesn’t have a lot of obvious features, discounting Mare Moscoviense (Sea of Moscow) there in the center right. The striking difference between the two hemispheres may not be a coincidence, and in fact may be due to the way the Moon, itself, formed!

Funny, too. For all of human history no person had ever seen the far side of the Moon. The Soviets were the first to get images of it, in 1959 (if you peruse a map of the Moon, note that many of the far side features have Russian names). The Apollo astronauts were the first to see it with their own eyes in the 1960s ... and yet, now, we get images of it for free, as a by-product of other stuff we do. Like, say, sending a spaceship to an asteroid to check it out up close.

These are difficult times, I know. But sometimes — not often, but sometimes — it helps to remember that we humans can do great things, too, when we set our sights high.