You don’t have to know a whole lot about science to know that black holes typically suck things in, not spew things out. But NASA just spotted something mighty strange at the supermassive black hole Markarian 335.

Two of NASA’s space telescopes, including the Nuclear Spectroscopic Telescope Array (NuSTAR), miraculously observed a black hole’s corona “launched” away from the supermassive black hole. Then a massive pulse of X-ray energy spewed out. So, what exactly happened? That’s what scientists are trying to figure out now.

“This is the first time we have been able to link the launching of the corona to a flare,” Dan Wilkins, of Saint Mary’s University, said. “This will help us understand how supermassive black holes power some of the brightest objects in the universe.”

NuSTAR’s principal investigator, Fiona Harrison, noted that the nature of the energetic source is “mysterious,” but added that the ability to actually record the event should provide some clues about the black hole's size and structure, along with (hopefully) some fresh intel on how black holes function. Luckily for us, this black hole is still 324 million light-years away.

SEE ALSO: Scientists believe they've figured out how to travel through a black hole.

So, no matter what strange things it’s doing, it shouldn’t have any effect on our corner of the universe. 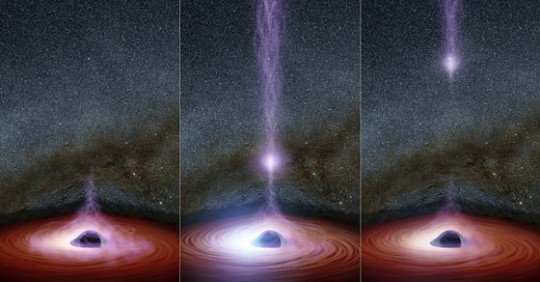 BTW, while we're on the subject of space and scientists uncovering the mysteries of it, here's America's favorite astronmer, Neil Degrasse Tyson, telling us why scientists, let alone anyone else, will never uncover the mysteries of Mars - because we'll never get there!

Want more of our coverage of the mysteries of spaaaace? Click here!

Have the wonders of the universe delivered right to your social feeds by following us on Twitter and Facebook!

It's a fan thing
Join SYFY Insider to get access to exclusive videos and interviews, breaking news, sweepstakes, and more!
Sign Up for Free
All Posts About
Science
Science
space
Related Stories