It’s safe to say author Charlie Jane Anders is a fan of science fiction. Not only has she written three novels and a whole host of short stories within the genre, but she’s also written articles and Twitter threads discussing and dissecting various popular sci-fi media — including Doctor Who and Star Trek.

However, the award-winning author’s latest book side-steps the world of fiction entirely. Instead, Never Say You Can’t Survive is a collection of non-fiction essays that offer valuable writing advice focusing on how to keep being creative while going through a tough time, whether it’s personally, or even, globally. And part of what makes Anders' advice so effective is its almost memoir-ish feel as she shares her own experiences grappling with various types of creative issues, be it trying to face down Imposter Syndrome or figuring out how to deal with trauma in your fiction.

"I feel like with good writing advice you don’t try and put yourself in this position of authority to say ‘I know more than you,’ or ‘I know what I’m doing,’ or ‘These are are the rules,’ or whatever," Anders tells SYFY WIRE. "It’s more like ‘Here’s what I’ve thought about, here’s what works for me.’ Often I try to think of it as starting a conversation more than handing down wisdom from the mountaintop."

Originally, the essays in the book had been published on tor.com, meaning audiences looking for guidance on a particular topic would be drawn to it, but might not check out the rest of the essays in the series. Anders hopes the book will encourage readers to read all the way through, while also cherry-picking as needed.

"I tried to make it something that develops ideas and keeps coming back to them and building on them. So I think you’ll get something different from it if you read the whole thing cover to cover," she explains. "I’m mostly known for science fiction, but I really tried to make it something that anybody can get something out of. So I’m really hoping that non-science fiction people are also going to latch onto it and that people who are writing other genres will find it useful."

Anders' advice also comes from a place of emotion, as she encourages writers to tap into their feelings as part of the creative process, and views getting into the right mindset as a part of writing.

"A lot of writing advice is very technical, sort of like an IKEA manual," says Anders. "I don’t think there’s anything wrong with that kind of advice. [But] A lot of writing is psyching yourself up and getting into the right headspace and getting in touch with the feelings that you’re trying to get on the page, and also just feeling like you can do this… The kind of writing advice that helps get in touch with those feelings is more useful in some ways." 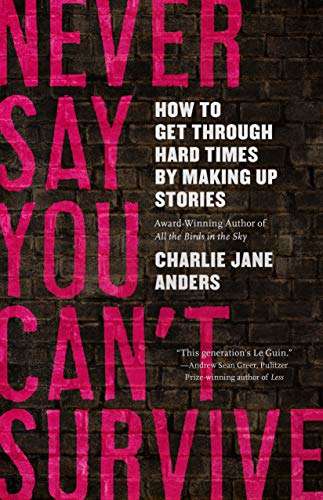 And while Anders' book doles out all kinds of helpful advice for stressed-out writers and other creatives, its main thesis centers around the fact that writing can be therapeutic for the writer — if not for survival, then for comfort. Nowhere is this better exemplified than in Victories Greater Than Death, Anders’ first-ever young adult book published earlier this year, which she wrote while also penning the essays in Never Say You Can’t Survive. She has since described the novel as her "queerest" one yet, while also stating that she often turned to writing it for comfort, especially following the 2016 U.S. election.

The first in a trilogy, Victories Greater Than Death is a space-set adventure novel that follows the story of Tina Mains, the keeper of an interplanetary rescue beacon — and the teenage clone of a legendary alien hero who was hidden on Earth until she comes of age to help defeat the evil currently plaguing the galaxy. But before Tina can figure out who she is, in the midst of all this, she must go on the run with the starship that found her and figure out how to start winning the war so she can save the entire universe.

Despite the hard choices and stakes at the center of the book, it’s also a celebration of all the most fun parts of a space-set story, while creating a uniquely positive experience for its queer characters, one not often found in space sagas — like having a universal translator that ensures that everyone automatically introduces themselves with their pronouns, so as to be addressed correctly.

"I feel like there is this expectation that if you’re going to write a queer book, it’s going to be about suffering or about oppression or being harassed or abuse. And those are obviously real aspects of the queer experience," says Anders. "But I feel like in general when I write about queerness, I try to write about queer communities and about queer people supporting each other and being there for each other because that is my experience of queerness in a lot of ways, and I think that it's worth celebrating and talking about. Not just having queer people who are isolated and miserable and oppressed. Even if you're dealing with some heavy stuff, you still have a community around you." 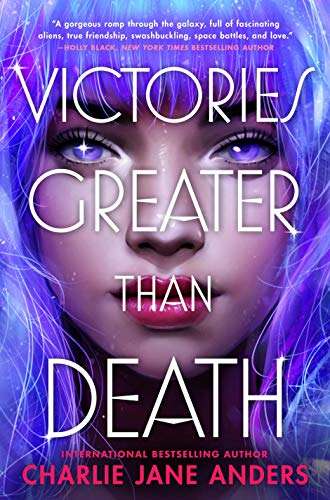 It's clear throughout the novel that it was a labor of love for Anders on more than one front, as there are various bits of technology and aliens tucked into it that are reminiscent of some of those found in other big space-set franchises. But the world she's created is quite original, something she really worked on. It's a lesson for other writers looking to do something similar in a media landscape filled with big pre-existing series that have come to define so much for so many fans.

“When you’re obsessed with some of these big franchise shows and movies and books like Star Trek, Doctor Who, Star Wars, and Guardians of the Galaxy, it’s easy to just let that seep into all your writing and just unconsciously reproduce what you’ve seen before," says Anders. "In general you have to make a mental effort to reach for something that’s different that feels like you haven’t seen it before and it’s something that doesn’t happen unless you consciously try to make it happen. You have to really consciously put your mind to creating something that’s a little different."

Of course, Anders notes that this is not always easy. "Oftentimes the first few tries you end up with something that’s just a carbon copy of something you’ve seen before or that’s a bunch of the usual tropes in the usual order that you end up reproducing," she says. "So it just starts with really reaching both for trying to imagine something really new and also trying to think about the logic of the world. You have to make a conscious effort."

This originality also has its roots in Anders' own fandom, with the author having used this novel to address some of the issues and themes of popular space stories, such as why all aliens look humanoid. "You get into these fan debates about stuff and of course, it seeps into your writing. And it's cool. A lot of the best stuff being written now is being written by people who are taking their fandom sessions and just bringing all of that nerdy argument or discussion to creating something new and different, which is great because it's good to respond to the things that shaped you."

In this way, Victories Greater Than Death and its eventual sequel are all about escaping into space, while also giving teens a story that they too might respond to eventually, as they begin to imagine and think about their own futures.

"As both a reader and as a writer, science fiction is where you get into the big questions about survival, like ‘How are we going to survive?’ and ‘What’s the future? What could it look like,’" says Anders. "It’s how you imagine possible futures but also how you cope with change and uncertainty and instability in the present. Science fiction is really all about coping with things that are new and different and weird and that don’t entirely make sense at first, and trying to make sense of that. We’re living in an era where science fiction is more essential than ever. It’s never really spoken to our reality as much as it does now, and I think that just as a reader I get a lot of encouragement."

Both Never Say You Can't Survive and Victories Greater Than Death are now available to purchase at your local bookstore. You can also buy copies here and here.