Like some terrifying mutant turkey with a pair of wicked talons attached to short feathery arms, the fossilized remains of an entirely new genus and species of Oviraptorosaur that prowled the Earth during the Maastrichtian stage of the Late Cretaceous period have been unearthed by paleontologists at the Maastrichtian Nemegt Formation of Mongolia.

This odd addition to the dinosaur kingdom was a fearsome feathered omnivore that existed approximately 68 million years ago. It belonged to a unique grouping of diverse theropod dinosaurs catalogued via detailed fossil records throughout the majority of the Cretaceous of Asia and North America.

Officially named Oksoko avarsan in a new paper published in the online journal Royal Society Open Science, this primeval creature measured in at 6.6 feet long and sported a blunt toothless beak that no doubt could demonstrate a punishing peck and formidable bite.

This particular new species only had two fingers per forearm, distinguishing itself from other Oviraptorosaur relatives which had three functional digits. This firmly indicates an element of adaptability in certain environments that helped them flourish and radiate out into the Late Cretaceous. 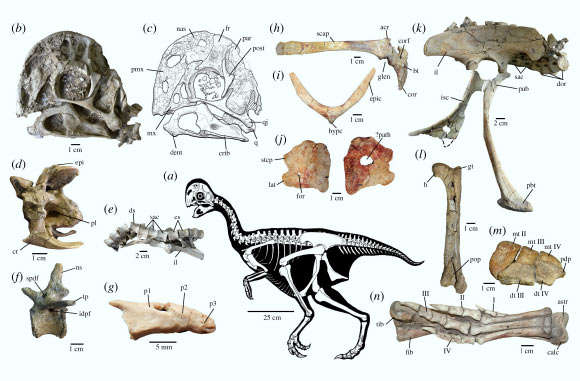 “The remarkably well-preserved fossils provided the first evidence of digit loss in the three-fingered family of dinosaurs known as oviraptors. The discovery that oviraptorosaurs could evolve forelimb adaptations suggests the group could alter their diets and lifestyles, and enabled them to diversify and multiply.”

Its etymology is derived from the words "oksoko," taken from the three-headed eagle of Altaic mythology and representing the assemblage of a trio of preserved skulls, and "avarsan," from the Mongolian word meaning to be rescued. 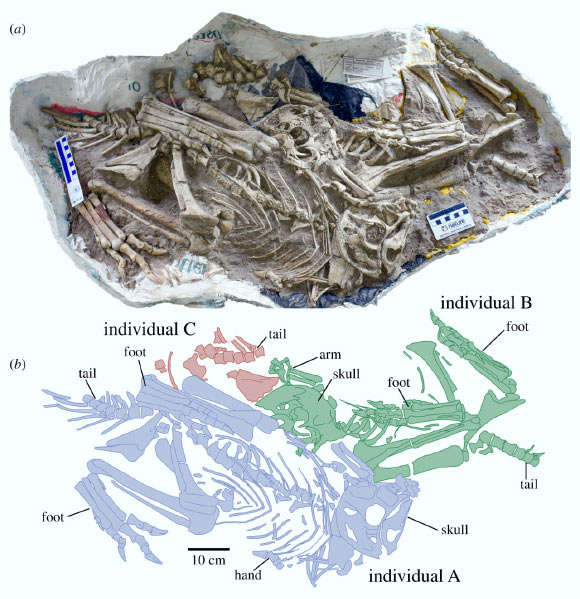 According to the paper, researchers additionally discovered that Oksoko avarsan exhibited social behavior as juveniles, with the fossilized remains of four young dinos nesting together at the Nemegt excavation site.

“Oksoko avarsan is interesting because the skeletons are very complete and the way they were preserved resting together shows that juveniles roamed together in groups,” Dr. Funston said. "But more importantly, its two-fingered hand prompted us to look at the way the hand and forelimb changed throughout the evolution of oviraptors — which hadn’t been studied before.”

"This revealed some unexpected trends that are a key piece in the puzzle of why oviraptors were so diverse before the extinction that killed the dinosaurs.”

It's a fan thing
Join SYFY Insider to get access to exclusive videos and interviews, breaking news, sweepstakes, and more!
Sign Up for Free
All Posts About
News
Science
History
Science
dinosaurs
Related Stories