No, a Planetary Alignment on May 28 Won’t Cause an Earthquake

I’m seeing some buzz on social media that a planetary alignment on May 28 will cause a huge magnitude 9.8 earthquake in California.

Let me be clear: No, it won’t. It can’t. Worse, there’s not even really an alignment on that date, at least not with the Earth. It’s all baloney.

I could've made the "NOPE" bigger, but I figure this makes the point well enough. Credit: Ditrianum Media, from the video

Photo: Ditrianum Media, from the video

This all stems from a video by someone who I believe is sincere but also profoundly wrong on essentially every level. It’s been picked up by various credulous places online, then spread around by people who haven’t been properly skeptical about it.

While this story hasn’t gone as viral as the usual astronomically impaired tabloid doomsday BS, it’s popular enough to debunk and hopefully can serve as a template for future such claims of doom and gloom that are actually smoke and mirrors.

There’s a whole lot of nonsense in there that I won’t even bother with, including claims of spirits and (seriously) Nostradamus.

But then the narrator starts talking about alignments. Several things struck me while watching this.

First, there is simply no way an alignment of planets can cause an earthquake on Earth. It’s literally impossible. I’ve done the math on this before; the maximum combined gravity of all the planets under ideal conditions is still far less than the gravitational influence of the Moon on the Earth, and the Moon at very best has an extremely weak influence on earthquakes.

To put a number on it, because the Moon is so close to us its gravitational pull is 50 times stronger than all the planets in the solar system combined. Remember too that the Moon orbits the Earth on an ellipse, so it gets closer and farther from us every two weeks. The change in its gravity over that time is still more than all the planets combined, yet we don’t see catastrophic earthquakes twice a month, let alone aligning with the Moon’s phases or physical location in its orbit.

So right away, we’re done.

I’ll note that in the video the narrator talks about the planets being “energized,” but doesn’t talk about what this truly means … but it doesn’t matter, because it’s meaningless. It’s the usual sort of New Age word salad when they talk about “energy”; they never define what that truly means (unlike in science, where it has a strict definition), so it means everything and nothing.

Also, if you watch the video, like for example at 7:27 and 8:11, these “alignments” don’t even align with the Earth! One is just two planets that appear to line up with the Sun when the Earth is far off to the side, and in another they actually form a perpendicular line with the Earth. This is beyond silly; it doesn’t even make any sense. 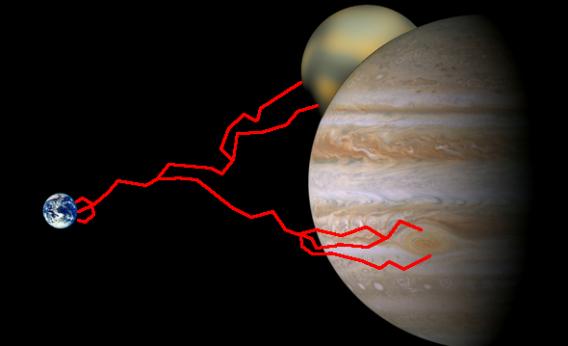 At 8:40 he shows another “alignment” that apparently goes between the Earth and Moon … but note that the Moon’s distance to Earth isn’t shown to scale! The sizes of the planets and Moon aren’t to scale either. Look at the width of the Earth’s orbit in the display; that’s 300 million kilometers in real distance. The Moon’s distance from Earth is about 380,000 km, or a bit more than 0.1 percent of the size of Earth’s orbit.

To scale, the Earth and Moon would be less than a pixel apart on his display! Now imagine how small the Earth itself would be on that scale.

That “alignment” doesn’t come anywhere near splitting the two. I’m not sure I’d take doomsday advice from someone who doesn’t seem to understand the software being used to predict it.

Again, I’m sure the narrator is sincere and honestly wants to help people and warn them of an event he thinks may be real. This puts him a comfortable step up over the various and repulsive scam artists you can find all over the Web.

But it doesn’t make him within a glancing blow of reality. Alignments of the planets have no effect on us at all. They can’t make you float, they don’t cause earthquakes (the “supermoon” doesn’t either), and don’t even get me started about astrology.

There is something very human about being scared of the unknown, and when we don’t understand something, it’s all too easy to supply any number of threatening boogeymen to stand in the nebulous shadows.

Understanding reality makes a lot of those boogeymen evaporate. Poof. This is absolutely one of those times.

And yes, understanding reality also introduces us to real things that are scary. But there’s the beauty of science: We can separate the real things that scare us from the things that shouldn’t. If something isn’t real, you don’t have to worry about it. You can focus instead on the circumstances you can affect.

I think that many people who turn to pseudo- (and outright anti-) science may do so because they feel that things are out of their control. That’s too bad, because—even though it may not seem like it at first—when you begin down the path of studying science, of becoming a critical thinker, these tools actually help you be more in control of your life, not less.

Take control. Think critically. And that goes doubly so when you’re reading stuff on social media.

The Walking Dead drops trailer for second part of S11