Philae Has Been Found on the Comet’s Surface!

After more than a year of searching, the Rosetta comet mission’s Philae lander has finally been found!

The definitive image was taken on Friday, when the orbiting probe swooped down to less than three kilometers from the surface of the comet 67P/Churyumov-Gerasimenko. Philae can be seen wedged into a crack next to a big boulder all the way on the right side of the image. The main rectangular body of the lander is obvious, as is one of its legs sticking up off the surface.

Close-up of Philae, with its parts labeled. Credit: ESA/Rosetta/MPS for OSIRIS Team MPS/UPD/LAM/IAA/SSO/INTA/UPM/DASP/IDA

The story of the lander was very dramatic. The Rosetta mission to the comet was launched in 2004, and took a decade to reach it. A few months after it attained orbit, it dropped the Philae probe, designed to land on the comet and attach itself using harpoons at a site called Agilkia. However, things went terribly wrong: The harpoons didn’t deploy, and the surface was harder than expected. Instead of securing itself, the lander bounced, traveling a kilometer or so before coming to rest.

It landed in an unknown (at the time) spot, on its side. It was able to send back a few images, but it was partly in shadow and couldn’t recharge its battery. Engineers were able to command it to rotate itself (by using a flywheel, a heavy rotating disk inside the lander normally used to orient it) and get a solar panel partly into sunlight, but it wasn’t enough. The battery died, and Philae was declared lost and dead in March 2016.

The orbiter, however, was (and is) still in fine health. It’s technically true to say it orbits the comet, but the gravity is so feeble that it’s easy to change the probe’s trajectory. This month it was sent down to just a few kilometers from the surface. A few sites on the comet had been tagged as possible locations of the lander’s final resting place, including one very likely spot.

With an idea of where the lander was, the Rosetta orbiter imaged the site, called Abydos, in very high resolution—a stunning five centimeters per pixel!—and finally spotted Philae at rest. The lander is roughly a meter across, so the images show it quite clearly.

It’s nice, and satisfying, to finally see it. The scrappy lander really touched people, and I remember how everyone was so excited when it launched, how upset they were when it didn’t successfully land, and then how moved they were in the attempts to save it. 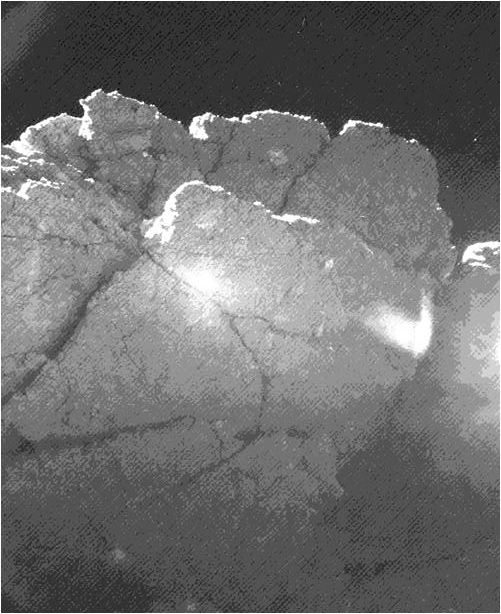 The "perihelion cliff" rock as seen by Philae, rotated to the same orientation as the images of Philae from Rosetta. Credit: ESA/Rosetta/Philae/CIVA via Nine Planets

But there’s more to the story: Philae took amazing images of its landing site, but they were hard to identify from orbit. Now we can actually see them, and put them in context; the so-called “perihelion cliff” image now can be seen to be a jagged-edged rock next to the lander. This gives scientists what they call “ground truth,” context to all the images that allows them to measure and better understand what Philae and the Rosetta orbiter see.

This wasn’t just an emotional resolution. It’s literally a scientific resolution as well.

And it’s just in time. On Sept. 30, the Rosetta mission will officially end. And in a poetic denouement, the orbiter itself will touch down gently on the comet’s surface, a replay of Philae’s story. The cameras and other scientific instruments will be kept on so that they may relay information all the way down, a last bit of exploration documented and sent back to its human makers more than 700 million kilometers away.

At that time, Rosetta will have a most fitting end: Becoming one with the object it was designed to study, a part of the comet as it orbits the Sun in the depths of space, an eternal monument to the people who dared take this grand adventure.