The Müller-Lyer illusion, when animated, maked it look like the blue and black lines are changing length. They aren't. Credit: Gianni Sarcone

I've said this before and I will no doubt say it many times hence: I love optical illusions.

For one thing, they're just fun. They warp our sense of reality, and it's really pretty cool to see how easy it is to fool our senses. Some illusions do this in complicated ways that make it hard to understand where our perception goes wrong (and yes, there are entire fields of psychology devoted to figuring out how our brain and eyes physically react to illusions).

But others are surprisingly simple, yet are deeply difficult to not see. One of the best is the Müller-Lyer illusion, and the easiest way to describe it is to just show it to you:

The two horizontal lines are the same length, but the lower one looks longer thanks to the Müller-Lyer illusion. Credit: Fibonacci / Wikipedia CC BY-SA 3.0

Despite what your eyes are telling you, those two horizontal lines are the same size! Measure them if you don't believe me. It's an utterly convincing illusion, but an illusion all the same.

But still, it's simple, right? Well, visual artist Gianni Sarcone decided to play with this illusion, and created an animated version of it that is simply stunning. Watch:

The Müller-Lyer illusion animated, making it look like the blue and black lines are changing length. They aren't. Credit: Gianni Sarcone

The "star" appears to pulsate because the arrows at the ends of the outer blue lines move in (become concave) as the ones on the ends of the inner black lines move out (become convex), and vice versa. So our eyes, falling in to the Müller-Lyer trap, see one set of lines growing while the other shrinks.

But I assure you, the lines are the same lengths. Put your cursor over them as the animation moves to see for yourself.

The reason we perceive this illusion is not entirely understood (Wikipedia has a decent article on this), but obviously the tails of the arrows pointing inward versus outward give context to the lines, making them appear different lengths. I suspect that our eyes are trying to perceive them as three-dimensional, and get confused by mixed perspective signals. It's perhaps related to the Ponzo Illusion, where two horizontal lines appear to be different lengths when placed between two mostly vertical but not quite parallel lines: 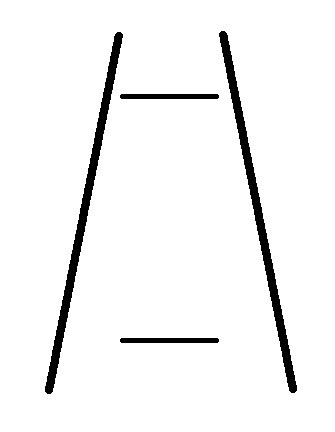 The Ponzo illusion makes it look like the upper line is longer than the lower one. Credit: Phil Plait

Your brain tries to see the vertical lines as parallel and moving off into the distance like railroad tracks. The upper horizontal line is interpreted as being farther away… but it's physically the same length as the lower, "closer" line. Therefore your brain decides the upper line must be physically larger to appear to be so big.

Amazingly, this also relates to the Moon Illusion, where the rising full Moon looks so huge on the horizon. That too is entirely an illusion; the Moon is not any bigger on the horizon (and in fact is slightly smaller than when it's overhead because it's physically a few thousand kilometers farther away). How about that?

Which brings me back to why I love illusions. There's so much wonderful perceptive physiology going on behind them, affecting how our eyes work, how they talk to the brain, how the brain works, and how we evolved to perceive the world around us. In general all this gloppy machinery inside our skulls works pretty well, but not perfectly well.

You can be fooled. We all can. Reality isn't what we see, and what we see can be at direct odds to reality.

That's a good thing to… keep in mind.

P.S. You should really go over to Sarcone's art website and poke around. His stuff is wonderful.

It's a fan thing
Join SYFY Insider to get access to exclusive videos and interviews, breaking news, sweepstakes, and more!
Sign Up for Free
All Posts About
Features
Science
Bad Astronomy
optical illusion
Related Stories