Monoceros is a constellation of faint stars not far from Orion and Sirius, visible in the winter sky. I’d expect it to have a better rep than it does, given the Internet’s obsession with what it represents: a unicorn.

Still and all, there’s another reason you should know about it. Lurking in its borders is an astronomical mystery, an object of incredible beauty, terrifying power, and bizarre origin. Best of all, it’s a puzzle, since we don’t really understand what it is or what it’s doing.

It goes by the cryptic name V838 Monocerotis (which sounds like a horrible disease). It’s been observed by Hubble many times, and those data are available to the public. Telecommunication engineer Roberto Colombari took his hand to those observations, and created the best image of V8238 Mon I’ve ever seen:

Yegads! How weird, and wonderful.

This is combination of observations taken at three colors, approximately blue, green, and red. Colombari had to do some serious fiddling to get this final image; the camera itself has a gap between the detectors which leaves black lines across the images (you can see it in the inset raw image below). He combined several images in each color, including some rotated by 45° to fill in the gap. In the end, he was able to make a smoother image with a darker background than I have seen of V838, which adds substantially to the beauty.

But what the heck are we seeing? 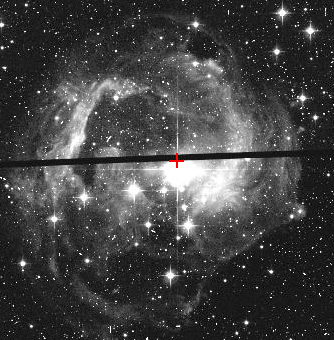 There are a few things we know for sure. In 2002, the star underwent a truly epic eruption, brightening from obscurity to nearly naked-eye visibility, despite its soul-crushing distance of 20 quadrillion kilometers away. It blasted out radiation at level a million times that of our Sun, and was briefly one of the most luminous stars in our galaxy. The material around it is mostly dust; this stuff heavily reddens light passing through it, and in fact the Hubble images using the blue filter don’t even show a hint of the cloud. Not only that, but images taken in the years since the star’s outburst show the dust changing considerably.

It turns out though, that the dust cloud isn’t physically changing! It’s normally dark, and the blast of light from the star is lighting it up. Since light travels at a finite speed, we see some parts of the material being lit before others; this is called a “light echo”. So it only looks like the cloud is growing; in reality it’s hardly moving at all.

Studies indicate that the dust existed before the eruption, part of a huge star-forming cloud, and is probably only about 3 – 10 million years old; a blink of the cosmic eye. Still, if the star is extremely massive, that’s enough time for it to start dying.

That was my first thought when I initially saw this object. Stars live their lives in a delicate balance; heat generated in their cores due to nuclear fusion tries to expand them like hot air balloons, but their immense gravity tries to squeeze their octillions of tons gas into the core. If something happens to that balance, the star can react poorly. For example, it can undergo epic paroxysms, blasting out vast clouds of gas and dust.

But it turns out that’s probably not what’s going on here. That would explain the star getting bright, but we don’t see the sort of expanding shells of material associated with such an outburst.

A leading idea — and get this — is that the central star is the result of two big stars colliding and merging! That’s an extremely rare event, but it would explain a lot of what we see. It would cause a huge blast of energy, for one. It would also produce X-rays, which were seen in other observations. The star would expand a lot, causing it to become very red, which is the obvious color in the Hubble pictures.

That’s pretty weird, but we don’t see too many stars like V838 Mon, so a rare event may be called for. They may have been two stars in orbit around each other, perhaps on a very long elliptical path, and over time finally merged. It’s just good we happened to be looking so we could see the 2002 flare up. Astronomers are still watching the star; if it has another such outburst then we may need to find another explanation; a collision is a singular event and we wouldn’t expect a repeat. But nothing on that scale has happened to the star in the past decade.

Before this, I never would have guessed something like this could happen; star collisions really are extraordinarily rare. But the Universe is vast, and time is deep. If you look long enough, you’re bound to see exceptional events. And when they are this stunningly beautiful, why, it makes the search that much easier to do.