Terrifying stories are a childhood staple that often begins with traditional fairy tales at a young age. Anything written by the Brothers Grimm or Hans Christian Andersen ticks many terrifying boxes, most of which are typically cut for the classic Disney versions. Scare levels vary from child to child. Some want all the gory details, while others shy away from anything leaning toward ghouls, ghosts, witches, and monsters. Learning about the horrors of the world is a part of growing up, and while you don't want to expose children to unnecessary scares, literature is one way to respond to probing questions about the mysteries of the universe.

With the recent release of Scary Stories to Tell in the Dark, it is time to look back at the books that probably caused us to sleep with the light on, check under the bed, and leave our bedroom door propped open.


Folklore and urban legends provide the foundation of many scary stories, including Alvin Schwartz’s Scary Stories trilogy. Released over 10 years beginning in 1981, the books provided an entry point into horror for many young readers. These are cautionary tales that scared generations and prompted an outcry from groups that believed they were too frightening for innocent minds. Some tried to get libraries to pull the title but were unsuccessful.

Short stories with titles including “The Girl Who Stood on a Grave,” “The Ghost with the Bloody Fingers,” and the ambiguously ominous “The Attic” featured in the first volume. This book was aimed at the middle school/tween market, but Schwartz also catered to the slightly younger audience with In a Dark, Dark Room and Other Scary Stories. Released in 1984, this was a collection of poems and stories that probably kickstarted many obsessions with the supernatural.

Part of the thrill of Schwartz’s collections is the Stephen Gammell illustrations accompanying the terrifying words. For the 30th-anniversary edition released in 2011, publisher HarperCollins commissioned A Series of Unfortunate Events artist Brett Helquist to illustrate this update. This sanitized version was met with more horror from fans, who were aghast at how watered-down the images had become. Gammell’s original illustrations are part of the overall Scary Stories experience and, frankly, can be considered just as vital as Schwartz's words.

Tween reading scares that left a lasting impression include pretty much every Roald Dahl novel — with The Witches ranking as both the best and the most terrifying. Just the thought of squared-off feet and getting trapped in a painting can still send a shudder down the spine. Elements of The Twits, Matilda, James and the Giant Peach, and even Charlie and the Chocolate Factory are sinister, grotesque, and darkly comedic.

In 1984, Dahl also released an anthology featuring ghost stories by other authors. Dahl read 749 ghost stories in the British Museum Library, from which he picked 14 — including Edith Wharton's "Afterward" — to make up Roald Dahl's Book of Ghost Stories. As he states in the introduction, “Spookiness is, after all, the real purpose of the ghost story. It should give you the creeps and disturb your thoughts.”

Horror books aimed at pre-teens walk a very thin line between what is considered appropriate for a young mind and what is too scary. As with any horror text or movie, whether you are 9 or 29, for one kid it might be too scary, while another will roll their eyes at how banal it is. Prolific author R.L. Stine offered up a sinister warmup with Goosebumps before edging into his novels aimed at teens. Making its debut in 1992, Welcome to Dead House was the first of 62 novels in this series. As with the other books mentioned so far, it has since been adapted for the screen (first as a TV show, followed by a movie).

Stine taps into a Twilight Zone style of creepy tales in a prolific manner. For two decades in a row, this series appeared on the list of frequently challenged books, appearing at number 15 and number 94 (Scary Stories had the top spot in the '90s). However, restricting access to reads is only going to make curious minds even more so. 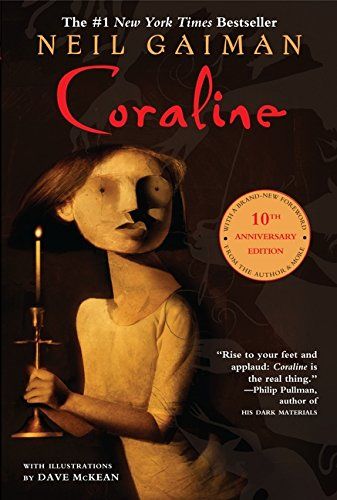 Neil Gaiman’s button-eyed story is creepy AF even as an adult. The real world is a frightening place, so these stories are part preparation and also a balm to the horrors that cannot be controlled (as a child or adult). In Coraline, a better version of this world is proved to be anything but. This story reinforces the notion that the grass is not always greener, the ordinary should be celebrated. As with a lot of horror stories, whether for children or adults, it is allegorical.

Growing up I thought I wanted to become a detective (until I realized you had to see dead bodies), so I gravitated toward Britain’s most famous crime solver, Sherlock Holmes. When I was 9, I decided that it was time to read The Hound of the Baskervilles, initially skipping A Study in Scarlet and The Sign of the Four in favor of this tale featuring a creepy moor, a giant beast, and a curse. This reading experience was just as terrifying and as wonderful as I hoped it would be, which shaped my interests in crime (both true and fictitious) and horror.

As with something like Mary Shelley’s Frankenstein, the concept of tweens didn’t exist when these books were written, but the lack of classification shouldn’t stop exploration of the monsters that have endured for centuries.

Choose Your Own Adventure stories recently underwent the Black Mirror treatment, but long before Netflix, these novels let the reader guide their own way. Between 1979 and 1998, 180 books in this series were released, published in 38 different languages, which sold 250 million copies worldwide. As a reader, you could solve a murder or hunt for ghosts. It was an excellent novelty that put you in the creative driving seat. For me, the Usborne Puzzle Adventure series provided a bigger thrill, as instead of turning to a page number, you had to complete a puzzle to progress. Titles include The Ghost in the Mirror and The Haunted Tower, which were perfect for a budding Sherlock Holmes who wanted to solve a mystery themselves. Fear often comes from a lack of control, and with these adventure books, there is an aspect of getting to guide the narrative.

The '80s and '90s produced plenty of horror movie classics, but it was also a fruitful period for scary stories aimed at young readers, shaping the next generation of filmmakers and writers. Reading horror as a child is a way of exploring the world. A lot of these supernatural beings exist only in the imagination — but as with adult scary stories, they can often be a stand-in for something very real. There is comfort in reading about characters who successfully triumph over a beast far bigger than them, and no matter your age, folklore stories perpetually remain appealing.