What's a Hot Jupiter, you ask?  No, it's not a flaming cocktail consumed by Mt. Olympus deities or the latest twisted yoga position.

Scientists define Hot Jupiters as a class of extremely warm gas giant exoplanets that orbit in close proximity to their host stars, often making one complete revolution in mere hours.  Due to the intense stream of solar radiation they absorb, these toasty titans appear in a bloated, puffed-up state.

A new discovery formally named NGTS-10b may be one of the most radical Hot Jupiters ever catalogued, as astronomers have recently pinpointed this extreme example of these exotic heavenly bodies — a Hot Jupiter that takes one spin around its mother star in only 18.4 hours.

Due to its slowly decaying orbit, one that is closer than the span between Mercury and the sun, scientists believe there will be great opportunities to measure its considerable girth and distance over the next 10 years. There's no rush, really, as it's not scheduled to crash into its sun for approximately 38 million years. These calculations may hold clues as to the nature of gravitational interactions between planets and stars, similar to the fluctuating tidal forces between Earth and the moon.

In a new study published by Cornell University and submitted to the online journal Monthly Notices of the Royal Astronomical Society, scientists observed this ultra-short-period exoplanet using the Next Generation Transit Survey (NGTS), a synchronized robotic array of a dozen telescopes at the Paranal Observatory in the Atacama Desert in Chile.

"A hot Jupiter is a large Jupiter-like planet which orbits its star on timescales less than 10 days," lead author James McCormac of England's University of Warwick explained in an interview. "In comparison, Jupiter orbits the sun with a period of approximately 12 years. NGTS was designed to primarily discover Neptune-sized exoplanets. In the process of discovering smaller planets, we are finding quite a few larger planets also."

This inflated, fast spinning exoplanet orbits NGTS-10, an orange dwarf star about 70% equal to the sun in mass and diameter. Once a more accurate measurement is acquired, scientists expect the distance between Earth and NGTS-10 to be in the range of 980 to 1,140 light-years away. 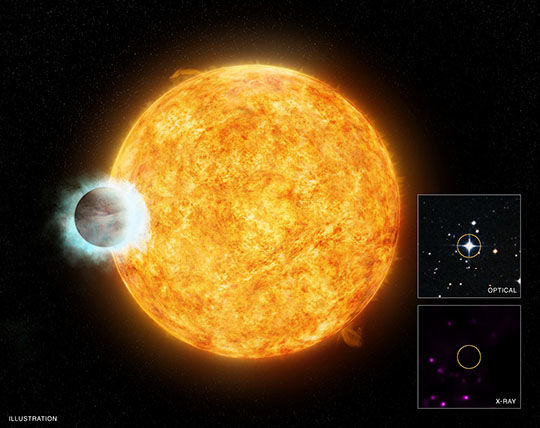 NGTS-10b is slightly more than 2.1 times Jupiter's mass and about 1.2 times Jupiter's diameter, orbiting its home star at a distance of only about 1.4% of an astronomical unit (AU), which remains a standard 93 million miles, being the odometer reading of a trip from Earth to the sun. To give us an idea of just how intimate this astronomical body is in relation to its star, Mercury orbits the sun at a distance of about 38.7% of an AU.

"Ultra-short-period hot Jupiters — those with a period less than one day — are quite rare," McCormac adds. "It will be very exciting if we are able to directly measure the orbital decay of the planet."