With the election coming up, I hear a lot of people making the claim that both parties are the same.

This makes my head explode. The GOP’s platform literally lists out its anti-science stance, from abstinence-only education to “clean coal.” The former has been shown to be worse than useless (abstinence-only education doesn’t teach concepts like condom use and sexually transmitted diseases, so those kids go on to have sex anyway—because they’re human—and wind up with higher rates of STDs and pregnancy), and the latter simply doesn’t exist.

I hardly need to lay this out; when GOP politicians talk, they make their stance quite clear. And that stance is facing firmly away from scientific reality.

As further evidence I give you Rep. Marsha Blackburn, R-Tennessee. She is a senior congresswoman, having been in the House since 2003, and has received nearly $300,000 from fossil fuel interests during that time, so you can guess where this is going.

During the Republican National Convention, the Washington Post held a series of live interviews and had her on with Jay Faison, a conservative philanthropist. In the video, the interviewer asks about climate change, and her response is stunning, even for a GOP Representative:

The nonsense she says starts at 1:15 or so. First off:

Certainly Congress, when Pelosi was the speaker, had a select committee to investigate global warming and then they decided they would make it climate change …

Cripes, this again? It was not liberals who started using the term “climate change” to replace “global warming”: It was Republican strategist Frank Luntz who got that started on the GOP side. Her claim is pure Orwell. Also, those terms have different meanings: Global warming causes climate change.

But she wasn’t done …

… but then they decided to make it climate change, because the Earth is no longer warming. And has not for about the past 13 years. It has begun to cool.

I would direct you to this graph of global temperatures:

It’s not just that Blackburn is wrong. It’s that she’s exactly, precisely wrong. She couldn’t be more wrong. Every single year of the past 13 years is among the hottest ever recorded. The years 2014 and 2015 are Nos. 1 and 2, by the way, and 2016 is looking to edge them out.

What she said is pure, unfiltered baloney (and she’s been saying it for a while now). The moderator’s expression and reaction looks like she hit him with a brick; it looks to me that he’s stunned by what she said and not sure if he should rebut her or not. A few minutes later (around the 3:04 mark) he does say something, stating (correctly) that climate scientists would strongly disagree with what she is claiming. So she decides to dig deeper:

Wow. Actually, yes, the science on the basics of human-driven global warming is settled. There are lots of details left to determine, as there is in any field of science. But we’re making the extra carbon dioxide, we’re dumping 40 billion tons of it into the air every year, it’s causing the Earth’s temperature to go up on average, and that’s having a wide and profound series of effects on the climate. That is the science.

There is no real debate on the science; only nonsense and smears by those who deny the reality of global warming. Sure, there are people who say the Earth isn’t warming, but those people are overwhelmingly not climate scientists. If someone says the Earth is cooling they need to retake middle school science class. And they certainly shouldn’t be in a position of power in the government. 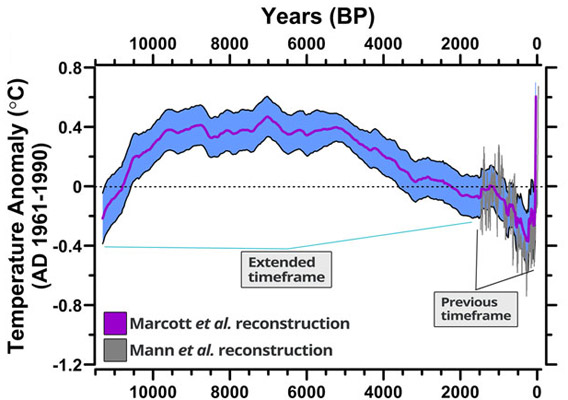 And by the way, the “hockey stick” is not a theory; it’s a set of reconstructed temperature measurements going back thousands of years, showing that the rate the planet is warming is unprecedented for many millennia. Her use of the term "theory" sounds to me like a way to belittle the idea, a common rhetorical ploy.

Hearing all this malarkey from a senior congresswoman is more than aggravating, it’s frightening. Deniers like her spin and deflect and say whatever flies into their heads, and all the while the thermometers creep upwards. And she’s the vice chairman of House Committee on Energy and Commerce, because of course she is.

So to get back to my original point: Yes, there is indeed a vast, yawning gulf between the two parties in many ways, and perhaps none greater than the very real threat of global warming. So when you have a friend who makes that “both parties are the same” equivocation, let them know that that’s just more hot air.

Tip o’ the blinders to Daily Climate and Bloomberg BNA.