Looking for a shortcut through our Solar System that'll substantially reduce your travel time as you throttle up and blast from one end of the neighborhood to the other? Help is one the way!

Discovered by a team of American and Serbian astronomers, a new, more efficient gravity-assist route leading straight through the middle of our planetary family acts as a sort of cosmic superhighway, driving errant asteroids and comets past the gas giants much quicker than previously believed.

This commuter lane pathway can supposedly push heavenly objects near Jupiter out to Neptune's distance in less than ten years and 100 times the distance from the Earth to the Sun in under a century. The researchers published their findings in the Nov. 25 issue of the online journal Science Advances.

This surging superhighway could be employed to deliver spacecraft and probes out to the distant corners of our planetary system in a big hurry, and could also be used to gain key knowledge about dangerous near-Earth objects that might smack our planet.

The video below displays the global arch-like formations of Solar System space manifolds. Its range depicts the region between the outer edge of the main asteroid belt at 3 AU to a bit beyond the semi-major axis of Uranus at 20 AU.

By studying the dynamic structure of these outer space expressways, Dr. Nataša Todorović of Belgrade Astronomical Observatory and her colleagues observed a connected network of arches within structures called space manifolds, which span a region from the asteroid belt to Uranus and beyond. This 'celestial autobahn' ushers objects through its territory over several decades instead of the expected travel time of hundreds of thousands or even millions of years that normally defines basic Solar System dynamics.

Space manifolds frame the boundaries of dynamic channels to provide superfast deliverance to the innermost and outermost reaches of the solar system. They play a vital role in calculating trajectories for spacecraft navigation and mission design by giving scientists a window into the chaotic nature of comets and their haphazard destinations. Todorović and her associates in the United States and Serbia exposed an unexpected ornamental structure of manifolds whose architecture was connected in a series of arches spreading from the asteroid belt to Uranus and further. 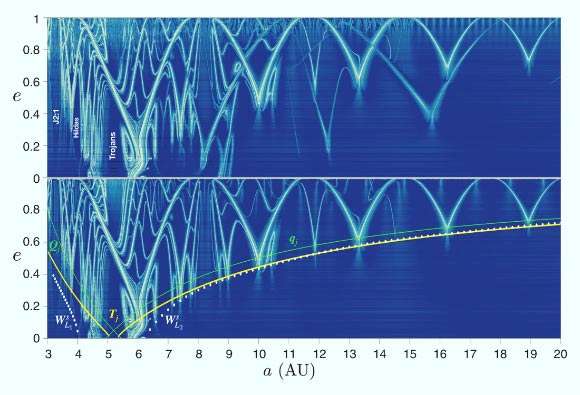 The most notorious arch structures are intertwined with Jupiter and the massive gravitational forces it generates. Jupiter-family comets (comets having orbital periods of 20 years) and miniature solar system bodies called Centaurs, are manipulated and controlled by these manifolds on vast time scales. Many of these drifting bodies will eventually crash into Jupiter or end up being tossed out of the Solar System.

"It should come at no surprise that Jupiter can induce large-scale transport on decadal time scales, as space missions have been specifically designed for Jupiter-assisted transport, with the flybys of Voyager 1 and Voyager 2 being cardinal examples," the astronomers explained. "That gravity assists can be enabled by manifolds is also well known to astrodynamicists. Yet, their widespread influence on natural celestial bodies has been largely undervalued and unexplored."

According to the study, astronomers derived data on these space manifolds by collecting numerical info via millions of orbits in our Solar System and computing how these orbits fit within the already-catalogued space manifolds.

Much is still a mystery of how these dynamic currents flow, but this discovery could allow future spacecraft mission planners to track a more economical route through our Solar System, as well as limiting asteroid and meteorite encounters and brushes with the traffic jam caused by the thousands of man-made objects cluttering up the Earth-Moon system.

Earplugs! NASA heard the loudest sound that ever boomed in the universe, and it’s screaming a mystery

Earth was rocked by a supernova that possibly brought on the Ice Age 2.5 million years ago