Star Trek's 6 essential Q episodes you have to watch

Q is not just a letter in the alphabet. When Star Trek: The Next Generation launched, an unforgettable character was created alongside the new crew of the Enterprise D. John de Lancie appeared as the omnipotent hassle known only as “Q” in the pilot episode. He put all of humanity on trial, and he continued to be a presence on the series up through the finale.

Not resigned to bother only one crew with trials and tests, de Lancie appeared as the character on Star Trek: Deep Space Nine and Star Trek: Voyager. It doesn’t matter how many other humans he spends his time with; Q’s heart, if he has one, will always lie with Jean-Luc Picard (Patrick Stewart). He has recently returned to Season 2 of Star Trek: Picard to make good on a promise that he made in the TNG finale: the trial never ends.

If Q appears in an episode, then it’s going to be memorable. John de Lancie’s performances are never anything other than stellar. We do have our favorites, and what better time to run through the Q-pisodes that we love the most? Are we putting Q himself (and the episodes that he appears in) on trial? We wouldn’t dare.

Here are our picks for the 6 best episodes in the Star Trek universe that feature Q. Red alert, mon capitaine.

This isn’t a true Q episode, but we have to mention it. The animated antics of this trial-based episode brought Q in for a cameo, and the show celebrated him with perfect mockery. It showed him turning the main crew into chess pieces, before featuring Beckett Mariner (Tawny Newsome) blowing right past him on her way to do anything else. She didn’t have time for any of his Q nonsense, and she told him so. That anyone would dare to do this to an omnipotent trickster is hilarious.

Flowing with french phrases, he’s portrayed as a ridiculous amalgam of everything that is Q. It’s silly, but that’s the point. We hope that de Lancie returns to the Cerritos again at some point in the future... we’d pay real money for an entire episode of Newsome and de Lancie sniping at each other. 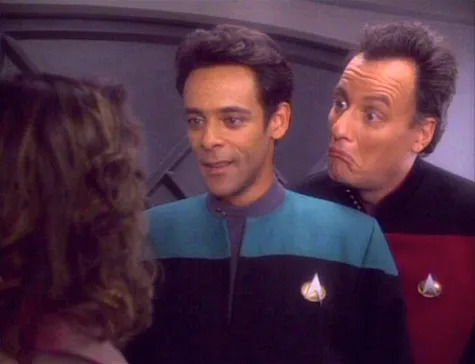 This episode is here because of one specific moment. Q only made one visit to DS9, and it was early on in Season 1. The moment that we love so much may be the reason why he never went back.

Benjamin Sisko (Avery Brooks) is not Jean-Luc Picard. When Q tried his trickster act on him, briefly transforming both himself and Sisko into boxers, Sisko did what many viewers likely wanted to do themselves from time to time. Sisko punched Q directly in the face.

“You hit me! Picard never hit me!” Q said, sprawled on the deck. Sisko told him what we’ve already said; he’s not Picard. No playing along, certainly not in Season 1 of this series. Q got punched in the face and that moment alone earns the entire episode a place here.

“How would you like to spend eternity as a Gorakian midwife toad?” Kathryn Janeway (Kate Mulgrew) only had to hear the name “Q” before she immediately called red alert in this underrated Season 2 entry. The Q that appeared on Voyager was not the Q we knew; it was another member of the Continuum who wanted to die. The Q we were familiar with appeared to deal with him a few moments later.

The first Q (Quinn) is eventually granted asylum by Janeway, and after a lot of discussion about the Q Continuum, he is made mortal. Very much against the wishes of the Continuum, Q provides Quinn with a rare poison and makes death possible for him.

The way that de Lancie portrays Q’s change of position throughout the episode is great, and we love it when Janeway tells him that the Continuum won’t be happy with him. “I certainly hope not,” he says. Despite whatever orders and rules he gets from on high, Q has grown a conscience. Underneath all of the judge robes and bluster, he cares.

This episode also features a blink and you’ll miss it cameo from Riker (Jonathan Frakes), as well as Q somewhat falling for Janeway. This would be followed up on the next time that Q visited the stranded Voyager crew.

4. “Deja Q” From Star Trek: The Next Generation

Upsetting the Q Continuum has consequences, and we saw what they were in Q's Season 3 TNG showcase. He fell out of nowhere, naked, to the deck of the bridge. He smiled at Picard and said, “Red alert.”

He’d been striped of his powers and was human, so naturally he wanted to join the Enterprise crew. He demonstrates enough selflessness by the end of the episode to get his powers back, but there are so many riches to be found before that happens.

The famous Picard hand-palm moment? That’s from this episode, and it comes after Q tells Picard that he’s the closest thing he has to a friend. In order to prove that he’s human, Worf suggests that Q dies. The absolutely fascinating dynamic between Q and Guinan (Whoopi Goldberg) continues here, and it includes Guinan stabbing Q’s hand with a fork.

When he gets his powers back? Q brings in a Mariachi band. He also makes it clear that there is likely some humanity left in him, as this episode's disaster-of-the-week conveniently fixes itself. The moment that stands out the most is Q’s farewell to Data (Brent Spiner). He doesn’t inflict Data with the “curse” of humanity, but he does give him a gift.

Data is allowed to have a miraculous and genuine laugh, and he remarks that it was a wonderful feeling. This episode is fun as hell, but it also marks a turning point. Q is markedly different after all of this, definitely more human than wants to be.

3. “Q Who?” from Star Trek: The Next Generation

Q feels the need to show the Enterprise crew how unprepared they are for what’s waiting for them out in the vastness of space. He greatly overcompensates and sends them right into their first encounter with the Borg, a foe that is laughably beyond them.

The Borg making their first appearance here is enough on it’s own, but Q’s involvement in the episode makes it an all-time great. The Guinan rivalry begins here, and as we've said, it fascinates us. Guinan seems to have some kind of defense against Q’s omnipotent powers. We still don’t know what that’s about, but we love thinking about it.

What does Q really want? He wants Jean-Luc to tell him that they are scared, unprepared, and that they need him. He wants Picard to humble himself, and that’s exactly what happens in the end. Picard begs Q for help, and with a snap of his fingers, it’s over.

Not really, though. Thanks to Q, the Borg are now aware of them. They’ll be coming, and we know how that proceeded to go down. Q almost got all of humanity assimilated because he wanted one man to swallow his pride. Classic.

2. “Tapestry” from Star Trek: The Next Generation

The current course of Star Trek: Picard (featuring Q showing Jean-Luc the road not taken) reminds us very much of this episode. Picard “dies” and Q greets him in the afterlife; he shows him what would happen if Jean-Luc didn’t get into a bar fight when he was a callous youth.

He wouldn’t have required a synthetic heart, but he would also have gone on to live a life without taking any risks. The bar fight was a pivotal thread on which the tapestry of Picard’s life was based. Picard has no interest in living the timid life that he experiences here, and he tells Q that he would rather die in the present than live as that person. Q obliges him. Though Picard survives and is still his same old self, he remains unsure whether or not it was another test from Q. He can’t quite believe that it was compassion, because what would Q have to gain from that?

Nothing, if you ask us. We’d like to think that Q’s selflessness continues here, and that he really does want to help Picard. This is Season 6, and we’re not far away from Q giving Picard a “helping hand.” It’s a terrific representation of how small choices can change a bold captain into a man who is bereft of passion and imagination. “Welcome to the afterlife, Jean-Luc. You’re dead.”

“You’re doing it right now. You’ve done it before and you’ll do it again.” The finale of TNG is one of its greatest episodes, and it rightfully bookends the series with Q. He’s the reason that Picard is moving back and forward through time, but he’s not the one who causes existence to be wiped out. Picard is to blame for that.

All of our favorite Q/Picard scenes are from this episode. The “yes or no” game is up there, as is Q whisking Picard to the moment where the first protein fails to form. Nothing tops their final scene, though, as Q admits that he was the one to blame for getting Picard into this in the first place. It was another directive from the Continuum, but the “helping hand” part? That was Q’s idea. Seven seasons changed an omnipotent ponce.

The trial never ends, and Q almost tells Picard a truth about his own future. He leans in, comes close to whispering, and then backs away with a smile and a “you’ll find out.” It is perfectly staged and perfectly played by de Lancie, and ever since this scene, we’ve been wondering what the hell Q was talking about.

At long last, we may be finding out. Q never appeared in the movies that featured the TNG cast, but he’s back in action on Star Trek: Picard. He’s already referenced some of what he said in this episode, and we are very lucky that he has made good on his promise: to drop by and say hello from time to time.

When Jean-Luc Picard meets his ultimate fate, we are confident that Q will be there. Q has had an immense effect on Picard’s life, but that goes both ways. Q would hate to admit it, but Picard has changed him as well. Maybe that’s why he can’t stay away from him; Picard makes him a better being. As many of the episodes listed above prove, Q longs to be better. He needs Picard to show him the way.