Stardust isn’t magical, but it could tell us where Earth’s water came from

So maybe stardust isn’t cosmic glitter with supernatural powers, but it has its own kind of magic when it comes to telling us things we would otherwise never know about the early solar system.

How Earth got its water has been a question hanging over the heads of scientists for years. Now several isotopes in a new presolar type of stardust have been found in the Allende meteorite, which fell to earth in 1969. Cosmochemist François L. H. Tissot of CalTech, who led a study recently published in Science Advances, and his team found one isotope dust formed through a mysterious process. The other could change how we see the origins of Earth and even the universe.

Strontium-87 (meaning 87 neutrons) is the isotope that can take us backwards through time to when Earth got its water. Tissot and his team found that the grains of stardust in the meteorite contain this isotope, which is a by-product of rubidium-87 decay. The amount of both these isotopes in the meteorite could tell us whether Earth formed as a dry planet or once had more water it eventually lost.

“There is a lot of rubidium-87 in the solar system because it is produced by other nucleosynthetic processes, which are the main contributors to the Solar system’s composition,” Tissot told SYFY WIRE.

We are carbon-based life-forms. Organic molecules that make up everything from humans to plants have to contain carbon. The radioactive isotope carbon-14 can be used to date mummies and other ancient things on Earth in which these organics are found, because its half-life, or the amount of time it takes for half of it to decay, is around 5,700 years. Compare that to the 49-billion-year half-life of rubidium-87. That explains why Rb-87 can be used to date the oldest objects in the solar system and possibly the universe.

Because Rb-87 is a volatile, or a substance that evaporates to gas easily, even at low temperatures, solar system objects that are high in other volatiles also have large quantities of this isotope. Here is where it gets interesting. Solar system objects containing water, one of the volatiles often found with Rb-87, are also believed to have formed much further out. At the edge of the solar system, temperatures can plummet low enough for the rubidium not to evaporate. Meteorites with substantial amounts of water probably formed far from Earth. 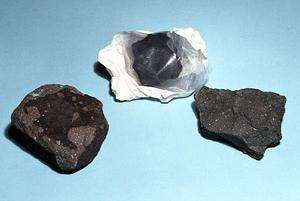 “Most of what we know suggests Earth accreted without much water and rubidium,” said Tissot. “Whether there was some water and Rb that were lost is what we are working to elucidate next.”

Primordial meteorites could be made of the same materials that accreted to form our planet at the dawn of the solar system. Because rubidium-87 decays into strontium-87, it is possible to get an idea of how the age of a meteorite that might have once brought water to our planet. Earth’s ratio of rubidium to strontium is ten times lower than that of water-rich meteorites. This could have meant that either Earth accreted from relatively dry materials low in water and rubidium, or from water-rich materials that it eventually lost for some reason.

Say Earth started out overflowing with water and rubidium. There would have been much more Sr-87 produced by rubidium decay than if Earth started out lacking in water and other volatiles. Its composition would be similar to that of meteorites without many volatiles, and also to calcium-and-aluminum-rich inclusions (CAIs) in those meteorites. CAIs go back—way back—up to 4.567 billion years. They were also part of the first objects that started to form in what was once the solar nebula and can reveal more about star and planet formation. Enter strontium-84, the reason Tissot thinks this stardust is unlike anything else in the solar system.

“The signature we found was so exotic because of its isotopic composition,” he said. “It contained up to 8% more Sr-84 than all other known solar system material (in which the amount of Sr-84 between samples varies at most by 0.02%). The signatures we found are thus two orders of magnitude larger than previously observed effects.”

The unusually high levels of CAIs and another strontium isotope, strontium-84, in the Allende meteorite, have forever confused scientists as to whether Earth formed with or without much water. Sr-84 is produced by a nucleosynthetic process not much is known about. This process, known as the p-process, could blow the distant past wide open if it can finally be understood. The grains of stardust in the Allende meteorite possibly contain Sr-84 in its pure form, which could at least tell us something more about the mysterious p-process.

What types of stars the p-process occurs in remain unknown, and because there has been little data to test models with, figuring out how it works has been nearly impossible. The Allende meteorite has at least opened one portal into the past with the Sr-84 which is thought to result from the p-process.

“Now that we know that a p-process carrier phase exists, we are working to physically identify it, rather than the chemical identification we did in this study, to learn more about its mineralogy and composition,” Tissot said. “This will help understand what other elements are produced along with Sr-84 during the p-process.”

So stardust really does have powers, just not the ones you might have expected.