The 14 most otherworldly costumes of American Gods (so far), ranked

The old and new deities of American Gods have been seen in plaid suits and pink dresses, pixelated sweatshirts, and gowns that appear to be made of liquid gold. Easter blossoms like the flowers of her season. Mr. Nancy oozes vintage glam. Media may appear as Marilyn Monroe or Lucy Ricardo or Ziggy Stardust at any given time.

Costume designer Suttirat Larlarb, who had previously taught a History of Clothing course at Carnegie Mellon University, wanted to fuse fashion with symbolism when approaching both deities who are thousands of years old and those who spawned from modern obsessions. Some interpretations (like Ziggy and Marilyn) are literal. Others have divine meaning woven right into them.

Whether it's Media's multiple transformations or Technical Boy's turbocharged cool, these are the 14 costumes from the series (so far) that we worship the most.

Lucy has some explaining to do as to why she's on all those TV screens — and so does Gillian Anderson for how she could morph into such a dead ringer for the I Love Lucy sitcom icon. It's not just the '50s-era polka dot dress but everything from her perfectly curled red coif down to the way she applies her lipstick that seems to resurrect Lucille Ball.

There is more to Shadow Moon's refreshing change from that brown suit he's always in (which Larlarb dressed Ricky Whittle in to give his character neutrality as he guides us through supernatural chaos ). Purple, the hue of royalty, is supposed to recall the Romans throwing a purple robe on Christ to mock the "false king."

You'd think a shiny gold suit would be right up Wednesday's shady alley, especially after his latest "job" probably got him enough money to trick himself out in bling, but then you're forgetting Nancy is a spider god. Spiders spin silk (apparently, in this case, even gold silk). No wonder he always looks so expensive. 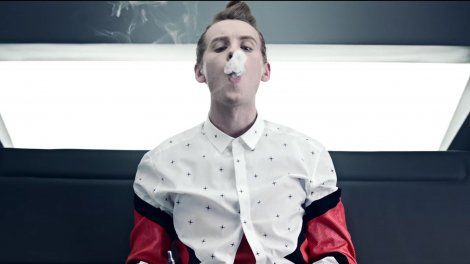 As Neil Gaiman originally envisioned him, Technical Boy was supposed to look more like a basement dweller with a serious case of acne. He needed a 21st century reboot. Slick and ultra-modern, he ditched the black trench coat from the book and dresses like he just sauntered out of a video game or a Silicon Valley startup.

After Shadow rides that creepy carousel and finds himself washed up on the frozen beach of Wednesday's memories, he encounters a vision in an ethereal beaded dress that moves with the wind. Back on the carousel, she blazes in a crown of flames that unmistakably screams "goddess" without saying a word.

Mr. Nancy's rainbow of suits to dress his humanoid form have to be the envy of anyone who wore a suit they regret to prom. The jewel tones in this one from "The Secret of Spoons" isn't just a fashion statement — they reflect the colors of the Ashanti people, whose mythology he first crawled out of.

Maybe Media thought it would appeal to the Old Gods more if she appeared like the blonde that gentlemen prefer, but Gillian Anderson got a boost behind the scenes. Her dress had a built-in fan to make her appear as if she were floating, and she was also riding a robotic contraption with more fans so the skirt kept flowing.

Easter doesn't just dress for spring. She embodies it. That is kind of what the goddess celebrated on the vernal equinox is supposed to do.

It's also made to blow in the wind like a spring storm when she unleashes her power in the Season 1 finale.

So there are no actual spiders on this suit (only in it if you count Nancy as the spider), but the electric stripes seem to glow in the shadows even without any supernatural help.

Now let's talk about that lime green fedora. The hat is part of his getup in the novel, and however mismatched it is, it just works.

This time, Media morphs into a pink-frosted Judy Garland and Technical boy gives the long black coat he wore in the book a nod with an over-the-top suit jacket. Their musical number isn't just for entertainment, either; it's a threat to the Old Gods, just in case those dapper guys with no faces don't get that across.

Really stare at this outfit for 30 seconds and you'll start to see a digital screen that got a severe punch in the face. It might remind you of a program that glitched and suddenly went all pixelated. You can't ignore that hair, either.

The shape-shifting vixen of the New Gods makes it seem like David Bowie jumped right out of his "Life on Mars?" music video and into the backseat of a limo, from sky-blue silk down to matching eyeshadow. This is just one of the reasons why we worship the late singer — and Gillian Anderson for pulling off the best Bowie cosplay ever.

02. Bilquis being the queen she is

When you're the actual Queen of Sheba, you should dress the part, and Yetide Badaki stuns in a flowy gold gown that shines so brightly, everyone in the temple (even the man she makes her king) is helpless to do anything but worship her.

If you know anything about how she absorbs that worship, you could say her power is all-consuming.

Because a Hindu goddess of war isn't going to hang around in a hotel waitress uniform forever, this reveal is a glimpse at the elaborate regalia she really wears. Her intricate gold crown and gold necklace dangling with skulls burn with the fire of a thousand suns, just like her eyes.