Before he hits the big screen, here's a first look at Marvel Comics' new Shang-Chi miniseries

Seems like everybody's kung fu fighting these days, with Netflix's short-lived Iron Fist series punching its way onto the small screen, Warner Bros.' Mortal Kombat reboot coming in January, and Marvel's Shang-Chi and the Legend of the Ten Rings feature throwing down this coming May.

But before all the martial arts mayhem begins, Marvel is resurrecting one of its most under-used characters in the form of a new fantasy adventure series starring the Master of Kung Fu — and SYFY WIRE has an electrifying three-page preview of the premiere issue.

Created by Steve Englehart and Jim Starlin, Shang-Chi first arrived on the Marvel scene back in 1973 in Special Marvel Edition #15, where the legendary fighter held paternal ties to the nefarious mastermind Fu Manchu.

Here the story finds an ancient secret society hidden since the demise of their evil charismatic leader, Zheng Zhu. Now his successor has been chosen to alter the balance of power in the world — Zheng Zhu’s son, Shang-Chi! Marvel's finest fighter is suddenly yanked back into the fold to a realm of death and destruction he thought he left behind years ago, where we'll discover chimes of Shang-Chi’s past that will change his life forever.

As a kid, writer Gene Yang says he loved Marvel Comics, but the Master of Kung Fu was never exactly on his radar.

"The vast majority of the comics in my childhood collection are Marvel, so I was aware of Shang-Chi," he tells SYFY WIRE. "Even so, I can’t really say I was a fan. I don’t think I bought a single Shang-Chi comic as a kid. I was embarrassed. I’m a Chinese-American, and I went through a period of time where I wanted to distance myself from my cultural heritage. To my pre-adolescent mind, picking up a comic about a Chinese-American hero would have highlighted what made me different. I didn’t want be the Asian kid trying to buy a kung fu comic."

The first Shang-Chi comic Yang bought was the Marvel MAX version by Doug Moench and Paul Gulacy in the early 2000s.

"By then, I was proudly Asian-American," Yang adds. "That comic read like the creators really loved Shang-Chi as a character, and I appreciated that. Recent world events have made all of us feel small. More than ever, we feel our need for that good that is larger than ourselves. Maybe that’s one reason why fantasy martial arts adaptations are seeing a renaissance. We definitely deal with those themes in our Shang-Chi story.

"We are keeping all of the big pieces of Shang-Chi’s backstory. He’s the son of a supervillain who dreamed of taking over the world. Shang-Chi grew up in a remote area of China, separated from modern society. He eventually made his way to America and joined forces with American superheroes."

"We want to flesh him out by adding to his supporting cast," Yang reveals. "We’ve met some of his siblings in the past, but in this particular miniseries we’re going to meet a full set of them. Each is going to bring out a different aspect of Shang-Chi’s personality.

"Shang-Chi stands at the crossroads between two heroic storytelling traditions: martial arts stories and superhero stories. He has the potential to express what is universal about heroism. In today’s climate of ever-increasing division, those cross-cultural commonalities are more important than ever."

Yang also credited the art team for bringing his vision to life, and finding the character work within all the high-flying fight scenes and superheroics.

"I am so fortunate to be working with a team of such talented artists," he said. "Dike Ruan and Philip Tan are handling the interiors, and the cover of the first issue is drawn by Jim Cheung. Dike is handling the present-day scenes, and Philip is handling the flashback sequences. Dike is especially good at communicating emotion. There is a gentle humanity to his work, but at the same time his action sequences really pop.

"Philip is something of a Chinese historian. He knows a lot about Chinese culture and Chinese history. We really leaned on him for certain story elements. He draws with an incredible amount of detail, and his panels are filled with energy. He presents China’s past – Shang-Chi’s past, really -- with authenticity, detail, and energy.

"Jim Cheung is considered a superstar comic book artist for a reason. I’m thrilled that he agreed to design Shang-Chi’s new costume. Jim worked really hard to find that balance between traditional Chinese elements and Marvel-style superhero elements. I think he did an amazing job." 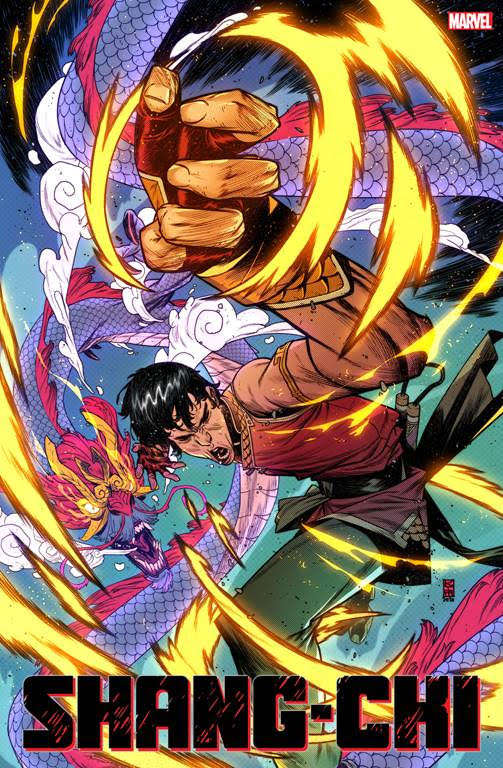 "This past year, we’ve seen a lot of ugliness directed at Asian-Americans," he says. "Asian-Americans are often treated as perpetual foreigners, as outsiders, and as two-dimensional. We want our story to present Shang-Chi as a three-dimensional hero with human wants, human fears, and human needs. We want him to be relatable to any reader from any background, to counteract that ugliness."