Lunar base concepts have ranged from futuristic 3D-printed structures to hangouts in existing tunnels formed by lava billions of years ago, but this one is its own subspecies altogether.

Several researchers at ESA’s Astronaut Centre in Cologne, Germany, are investigating new and often sci-fi-looking concepts for lunar bases as the space agency prepares for its own moon missions. Angelus Chrysovalantis Alfatzis is one of those researchers, and his vision for a moon base merges the brain of an architect with the necessities for living in an alien environment.

Alfatzis’ “hyperlocal” approach is based on creating a sustainable lunar habitat that will require materials to be sourced and produced on the moon. He dreamed up this design in collaboration with others working within ESA’s Spaceship EAC Initiative, which forges partnerships with universities and research institutions. The ESA believes (as does NASA) that sustainability in space is vital for success on extended missions to the moon and eventually Mars.

“I always strive to find material and structural solutions in accordance with the resources available on-site,” said Alfatzis, a student in his final year at the prestigious National Technical University of Athens, Greece. “At the moment, my focus is on using unprocessed lunar soil for construction and the architectural applications of this.” 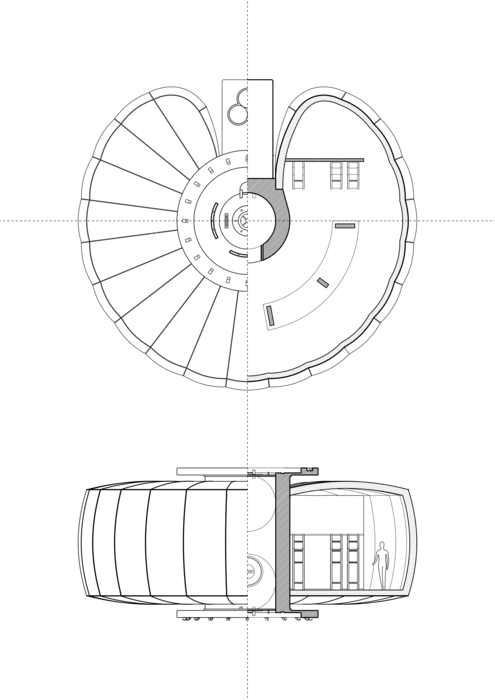 Lunar structures have to keep out killer radiation and anything else that could be a threat to humans (breathing in moon dust could mean internal bleeding from all the micro-shards of glass). Their priority is to keep astronauts shielded from such dangers and to act as life support over 200,000 miles from Earth, but there are other factors to consider when virtually building one. Such a structure has to hold up through temperature changes on the moon. It also has to tolerate the levels of gravity and sunlight.

This is where the EAC Initiative’s multidisciplinary team came in. Experience in architecture, aerospace engineering, and biology was crucial to determining how this module would be constructed and what it would require in terms of energy.

“Our idea is to transport inflatable modules to the base of a small crater on the South Polar Region of the Moon, and then gradually fill the cavity with lunar soil, until the modules are effectively buried,” Alfatzis explained. “Meters of shielding will protect those inside from radiation. Building inside a crater will also help insulate due to the stable temperature of the Moon’s underground environment and provides cover from the threat of micrometeoroids."

That was how Alfatzis achieved the look of these lunar pods, which appear as if some mythical moon-creature could crawl out of them at any moment. Of course, if this idea, which snagged runner-up in the Moon Village Association, ever comes into being, the only creatures emerging from the pods will be human astronauts.

Whether this moon base concept ever actually makes it to the moon, you can’t deny how painfully cool it is.

Would extreme cold turn you into an abominable snowman, or would you emerge alive?