[The spiral galaxy Was 49a and its tiny meal 49b, seen in optical light (Discovery Channel Telescope, green) combined with X-rays (NuSTAR, purple). Credit: DCT/NRL]

It’s what they do. It’s how they grow! It’s how our own Milky Way got so big, in fact, by eating smaller galaxies. When we look out into the Universe and study galaxies, we see it happening all the time. Galaxy collisions are pretty common.

But they have consequences. Every big galaxy we see has a gigantic, supermassive black hole in its core. When two galaxies collide, a lot of different things can happen. For example, if it’s a head-on collision between two big galaxies, the two black holes can draw each other into a binary system, orbiting each other (and, after billions of years, they can mimic their host galaxies and merge, though that is a far, far more violent event).

Many times, the collision shakes both galaxies up, and material can drop down into the center of the bigger galaxy and fall into the black hole. It piles up in a huge disk that can heat up to millions of degrees and glow so brightly it can outshine the rest of the galaxy! We call those “active galaxies”.

Artwork depicting a black hole with an accretion disk, and magnetic fields swirling above it. Credit: NASA/JPL-Caltech

Sometimes the collision is between a big galaxy and a smaller one, and is a more gentle, a grazing impact. In that case the smaller galaxy is subsumed into the bigger one, eventually becoming a part of it. The Milky Way is currently eating several other smaller galaxies as you read this, slowly ingesting them into its own system.

While we’re still learning about the details of how all this occurs, we have a pretty good grasp on the basics.

Even at first glance, this is an odd-looking galaxy. It’s 850 million light years from us, so we don’t get a lot of detail, but we can see enough to know it’s a spiral. The shape is distorted, with that outer arm wrapping around and somewhat kinked. But the most obvious bit is that pair of very bright blobs on the right. What are they?

It turns out those together denote a single smaller galaxy, a dwarf, getting eaten by the bigger one (we call the main spiral galaxy Was 49a, and the little one Was 49b). Interestingly, both galaxies are active! A study done 25 years ago shows that both the center of 49a and 49b are brighter than you’d expect, and have other characteristics of actively feeding black holes.

This isn’t too surprising; a lot of (though not all) active galaxies seem to be triggered by a merger, when material shaken up by the event falls toward the black hole and heats up. The collision itself looks to have been fairly gentle; 49a wasn’t disrupted very much, and 49b seems to be settling in comfortably about 25,000 light years from the bigger galaxy’s center. Data indicate it’s more or less moving along with the rotation of the galaxy, so you wouldn’t think there were a lot of fireworks during the event. And, as active galaxies go, 49a appears to be pretty normal.

But a new study showed a surprise: Even though 49b is pretty tiny —the Milky Way is 200 times more massive— it’s positively blasting out radiation, so much that it far outshines the bigger galaxy, which is unusual (usually in these things it’s the bigger galaxy’s black hole that really lights up). In total Was 49b is as bright as a trillion stars like the Sun! That’s really bright, as bright as a far larger galaxy. 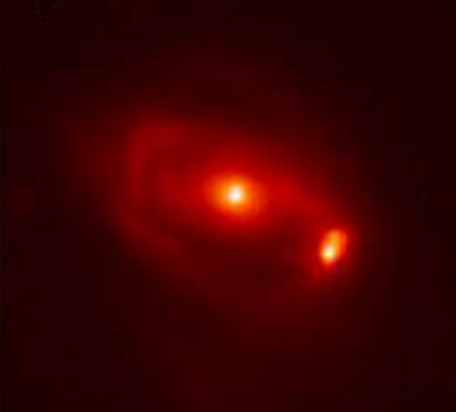 That’s why we see two blobs there. One is the black hole, its disk of infalling material glowing hotly. The other is actually made of clouds of gas near Was 49b’s center, lit up and glowing themselves due to the ferocious energy pouring out of the black hole.

That may not sound like much, but it’s a huge ratio. Huge. The Milky Way’s black hole is only a teeny 0.0004% the mass of our galaxy. So the big relative size of Was 49b’s black hole is really weird.

Over time, studying hundreds and hundreds of galaxies, we’ve learned that in general the bigger the galaxy, the bigger its central black hole. They form together, and grow together, each influencing the growth of the other. This galaxy/black hole mass relationship holds pretty well over a wide range of galaxy masses.

But Was 49b blows it away. So what’s going on? Why is Was 49b’s black hole so immense compared to it? That’s not clear at all.

One idea is that maybe Was 49b wasn’t always tiny. Perhaps it started out life as a much larger galaxy, with a more proportional black hole. Then, during a big collision or two, some of its mass got stripped away; sometimes collisions fling out gas and stars from the victim galaxies. But it would’ve had to have lost a lot of mass, a majority of it, which is improbable. Also, there are no other big galaxies around that volume of space to collide with. So that seems pretty unlikely.

Maybe the black hole just grew a lot during the galaxy formation stage while the galaxy’s growth itself was stifled somehow. Maybe there’s something else going on here we just haven’t figured out. We just really don’t know.

I love mysteries like this. They play out a lot in astronomy; we discover a new kind of object as our technology improves, then we find more. We can categorize them. Look for trends, apply math and physics, begin to understand. Then we start to find the outliers, the weirdos, the ones where some exceptional circumstance has made them special. It happens with asteroids, planets, stars, even galaxies themselves.

I also like to think of the analogies between what we see in the Universe and our own human condition. And here were have a tiny, faint galaxy that literally was grabbed by another and is now being eaten by it … but despite that, it blazes away because despite its diminutive stature, its heart is enormous and bright.

That’s a little more on-the-nose than I generally like in my analogies. But hey, if the black hole fits, wear it.

* The name comes from a 1982 catalog of unusual galaxies studied by A. J. Wasilewski. In my head I pronounce it as Woz.