All hail the king.

Todd McFarlane's first new monthly Spawn book since 1992 is about to have a record-setting debut. King Spawn #1 from Image Comics, which hits comic book stores Aug. 25, has netted nearly 500,000 orders, the largest new superhero monthly comic book launch since 1996 (based on industry standard non-returnable, non-retailer exclusive sales). That's bigger than any DC Comics monthly superhero launch in that same time span, including Batman. It also outpaces all of Marvel's superhero monthly first issues in the same time frame, according to an Image press release.

The exact number of copies that retailers have ordered for the upcoming Spawn monthly is 497,000. How big a number is that in today's comics market? Consider that in June, industry tracking site Comichron showed only six books sold more than 100,000 copies, and the top book, Venom #35 sold 282,365 copies. A great number, which only makes King Spawn's pre-orders look even more colossal by comparison.

McFarlane tells SYFY WIRE that the success of this comic, as well as June's one-shot Spawn's Universe, justifies his faith in the character he's been devoted to for decades. He also jokes that part of the reason for the bigger sales numbers is because fans know he brought in some help for this issue. "I think [King Spawn] is a better read emotionally because I didn't write all of it," McFarlane says. "I brought on some better talent in the writing department."

Never one to shy away from a little promotional warfare, McFarlane says the cutbacks in publishing at Marvel, and specifically DC Comics, may have helped him. "In an odd way, Marvel and DC may have done us a favor, right? When they sort of moved their distribution and decided to cut back on the number of titles they were putting out because they weren't all reaching the numbers they wanted, the money that was left on the table needed to be spent somewhere," he says.

"So if comic book stores are keeping the same budgets for new books and they see a bunch of titles are getting canceled, they're now looking to put their money elsewhere," McFarlane continues. "And I assume that the easiest place to put your money is in books that you think are going to deliver quality, whether that's Marvel, DC, Image, or anybody else. [Comics] happen to maybe be the benefactor of a pandemic where people are staying home and doing a lot more sort of in-house entertainment, like reading comics, and so we're seeing the cream rise to the top."

McFarlane is pulling out all the stops to promote King Spawn. He's heading to Baltimore this week to sign and number the special 1:250 retailer variant with the white background. There will only be 250 copies of this particular variant, for retailers who ordered 250 copies or more of the first issue. It will mark the lowest print of any Spawn comic in history. 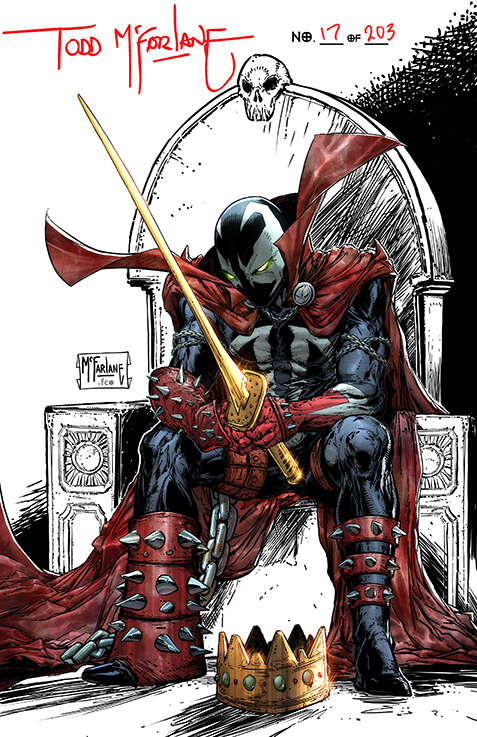 The first issue features six variant covers in total, drawn by such all-stars as longtime Spawn artists Greg Capullo, Sean Gordon Murphy, and Brett Booth, as well as one drawn by superstar creator Donny Cates, a Spawn fan known more for his writing talent than his penciling skills.

McFarlane inked Cates' variant cover, and when asked how much work he had to put into it, he laughs and replies, "I'm sure Donny will agree with me when I say he's no Jim Lee! I had to work at it a little bit more than if it was Jim. We'll leave it at that."

McFarlane says he was excited to bring in Cates –– who has made McFarlane's co-creation Venom into a bestseller for Marvel –– in order to have the kind of fun he says doesn't happen in comics anymore. "When I asked him [to do it], Donny found it as odd as other people did when they heard he was doing the cover," he says. "He said, 'What do you mean? Are you serious?' I told him that I had seen some of his drawings, but I also said that we need to remind our industry from time to time that besides a business, comics can also be fun. I think we've lost a little bit of that. So I told him let's do it, and he said, 'You're really going to put this on King Spawn #1?' And I told him, 'Yeah, so don't worry about it. No matter what happens, we're going to make you look good.'"

This Week in Genre History: Spawn was ahead of its time (but also bad)