Chug along the tracks of the nostalgia train, everyone. Because this week, some of your favorite franchises are coming back for a major big-kid collectible makeover. Join me, your resident if not favorite Toy Journalist while our bills and coins make their weekly wallet evacuation.

And if you think about it, because we're showing you the newest preorders of the week that you won't be charged for until they ship, we're actually saving you money this Christmas season. Justifications are awesome. Let's rock! 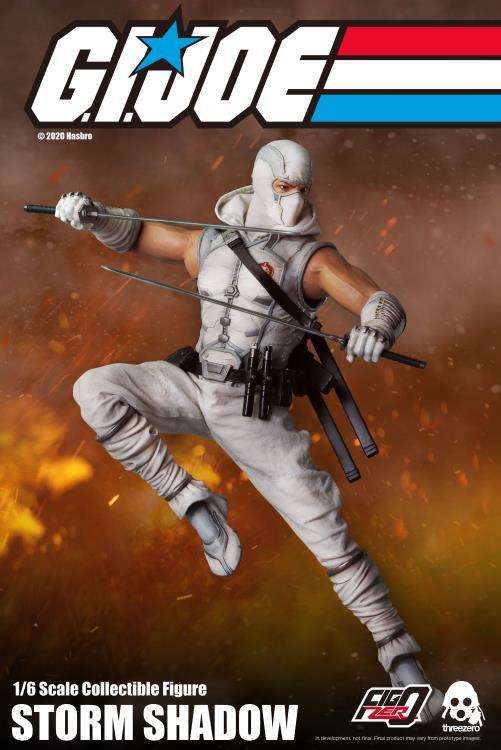 Threezero is an amazing toy company and its gorgeous creations are rising in the ranks. This week, we have two mind-blowing announcements from Threezero and we're starting off with one of the most beloved franchises to date: G.I. Joe! And this time, we're looking at the coolest Arashikage Ninja that's ever come out of the '80s. Standing 12 inches tall, the 1/6 Storm Shadow collectible figure features Threezero's standard fully-articulated body with fabric hand-tailored costuming with a high attention to detail. Storm Shadow includes a full loadout of accessories including his nunchaku, a recurve bow, two quivers, two katanas with sheathes, three tactical pouches, four arrows, and five pairs of hands.

The second reveal from Threezero (and another collaboration with Hasbro) is its breathtaking set of six Mighty Morphin Power Rangers figures. These are seriously just spectacular to look at.

Each Ranger costs $99.99, or fans can purchase the whole set for $549.99. Yes, it's expensive but it might be the only Ranger team you'll ever need. But as someone who collects endless Mighty Morphin' Megazords and Dragon Zords, I know that's not true — if we love them, we will keep buying different versions of them.

Now, let's talk specs on these figures. These figures stand 12 inches tall, feature 34 points of articulation, and hand-tailored fabric clothing (which makes them look really, really good). They come with their signature weapons and alternate hands — fans can look forward to these shipping Q3 2021.

It wouldn't be an issue of Important Toy News without taking a look at some Star Wars toys! And with this newest announcement, premium action figure maker Hot Toys is showing off a beautiful new piece from The Mandalorian.

It's a 1/6 scale Moff Gideon, officially expanding on the Hot Toys The Mandalorian Collection. The figure is based on Gideon's appearance in the series featuring a newly developed head sculpt with astonishing likeness, skillfully tailored outfit and cape, the iconic Darksaber with interchangeable blades, a blaster, and a display base! The Mandalorian TMS029 Moff Gideon 1/6 Scale Collectible Figure costs $264.99, ships in June 2022, and is available for preorder today.

Next in line for Star Wars toys (and still hailing from The Mandalorian), Hasbro has revealed its newest action figure from the Star Wars: The Black Series collection. It's Bo-Katan Kryze, the legendary Mandalorian warrior. (And totally not that Battlestar Galactica Starbuck action figure we always wanted.)

This articulated action figure stands 6 inches tall and comes with three character-specific weapons. You can pre-order her today for $20.99 and she will ship in May 2021.

Funko made a very exciting announcement this week — at long last, fans can build their own customizable Pop! vinyl figures! Via Funko, "People allows customers to create Pop!-stylized figures of themselves, family or friends! Fans can now choose from hundreds of unique combinations of hair, apparel, accessories, and more to build a custom Pop! Whether you wear glasses, are rocking pink hair, growing a beard, or even getting married, there is a Pop! for you."

The unfortunate catch? You can order and have these toys built at Funko's headquarters in Washington state or at the Funko store in Hollywood, California. These personalized 3.75-inch Pop! vinyl figures retail for $25 and come in a personalized box. We will definitely keep our eyes on this one and stay hopeful that it will one day be available for order via the internet because fans will love this!

Japanese toymaker Sentinel has announced something so incredibly beautiful this week — even if you're not a Marvel fan, you just have to admire the engineering of this gorgeous toy. Presenting the Fighting Armor Captain America action figure — and it is deluxe and tasty.

According to details from Sentinel, the figure was sculpted with the idea of a suit containing a real human body in mind, and each joint point is designed to move in a position very close to an actual body. It stands 6.5 inches tall, comes with many pairs of hands, a shield, and the shield attachment parts. If the paint wasn't beautiful enough, there are die-cast parts on this toy that will make that armor shine. Sentinel's Fighting Armor Captain America costs $107.83, ships in April 2021, and is available for preorder today from HobbyLink Japan.

We've hit the end, my toy loving friends, and we will wrap up this column with an Alien toy announcement from NECA!

To celebrate the film's 40th Anniversary, NECA is releasing an ongoing series comprised of new releases all year long with at least nine different limited edition action figures to collect! This wave, per NECA, "includes Ripley and Lambert in their compression suits and a Xenomorph styled by the incredible artist [H. R.] Giger and his original concept artwork — all with various upgrades and improvements."

Each figure will come packaged in a 40th Anniversary Kenner-inspired window box to commemorate the occasion. You can order all three figures today for $79.99 and they will ship in May 2021.