Video from an asteroid’s surface!

Last week, the amazing Hayabusa-2 spacecraft released two rovers which landed on the wee asteroid Ryugu, and then sent back amazing images as they bounced — yes, literally, bounced — across the surface.

The rovers are called MINERVA-II1 A and B. They are identical and tiny, just 17 x 7 centimeters— about the size of a decent personal Chicago style deep-dish pizza. The images released showed the asteroid and the mothership spacecraft from the rovers as they descended, as well as a cool (if trippy) view as Rover A bounced up off the surface.

On September 23, as it sat on the surface between hops, Rover B took a series of 15 shots over the course of an hour and fifteen minutes, which JAXA, the Japanese Space Agency, put together into a very cool short video:

Whoa. Ryugu is small, just about a kilometer wide across its diamond-shaped equator, and rotates once every 7.6 hours. So, over the course of those images, you can see the Sun move quite a distance across the sky!

And the surface itself looks amazing. We know that Ryugu is what’s called a rubble pile asteroid. It’s not a solid, monolithic block like a rock you’d find in your garden. Over millions and billions of years, it’s suffered countless collisions with other asteroids, many of which are slow enough to crack it without shattering it. It’s now basically a collection of millions of rocks held together by their own feeble gravity.

In some cases, rubble pile asteroids have patches of smooth surface as rocks are pulverized by collisions, the solar wind, and micrometeorite impacts. The smaller grains created flow around and smooth out rough spots. But at least on this part of Ryugu the rocks are big, and the surface craggy. Other images from the rovers show pretty much the same thing.

… as does this image from the Hayabusa-2 spacecraft itself, taken from a mere 64 meters above the surface:

If I’ve done my math right, the raw data making this image have a resolution of about 0.6 centimeters per pixel. That’s the size of a small pea. So if a dime were sitting on the surface in this image you’d be able to see it! This is the highest-resolution image of the surface of Ryugu ever taken.

The upper part of the image shows the surface, with rocks, pebbles, and grains all the way down to the resolution of the shot. I don’t see any evidence of sorting, which isn’t surprising. If you have water or air moving over a surface the rocks and such can be arranged by size, but there’s no evidence of that here — but then there’s no air or water on Ryugu! But it’s worth looking, because, for example, there was gas movement over the surface of the comet 67P/Chuyurmov-Gerasimenko, as ices sublimated (turned directly from solid to gas) when it got close to the Sun. It’s also possible that mass movement on the asteroid could do some minor sorting; say, a bump from another asteroid causing a tremor that knocked rocks about. But none is obvious here.

The bottom part of the image is dominated by a massive boulder about 12 meters long, a bit longer than a semi-trailer box container. To my eye I don't see a lot of loose rocks and schmutz on it; perhaps they've been shaken loose over time.

You can get a wider view in these context shots:

The yellow squares in both images show the outline of the high-res image above. In the one on the right you can also see the shadow of Hayabusa-2. The glow around it is called heiligenschein, a reflection of sunlight. This is also called the zero phase effect, and is due to the Sun being directly behind the spacecraft when it took the shot. That has two effects: One is that there are no shadows directly underneath it so the surface looks brighter, and also because small grains tend to reflect sunlight back in the direction it came, again making the surface look brighter. If you’ve ever walked past wet grass and looked at the shadow of your head you can see the same thing; it looks like you have a halo (which is how heiligenschein translates from German). Shots like this can actually be used to learn more about the surface properties of Ryugu.

Mind you, this mission is far from over. The MINERVA rovers are doing well, and another rover, MASCOT, is due to deploy in the next week or so. Hayabusa-2 will also be collecting samples of the asteroid and returning them to Earth! The spacecraft will actually drop to the surface to collect three different samples, put them in a capsule, and bring them back here so scientists will have a chance to examine them in the lab. This will tell us about the surface composition in detail, as well as how it’s weathered over time. 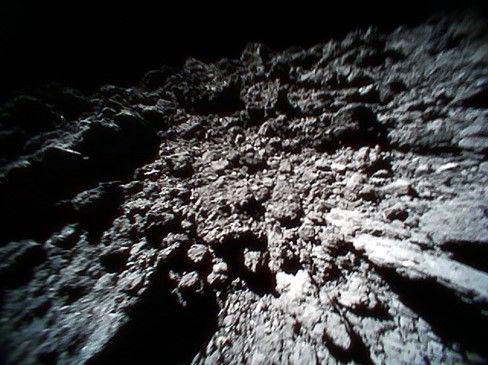 An image of the surface of the asteroid Ryugu taken by the rover MINERVA-II1 B. Credit: JAXA

There is also going to be a sub-surface sample collection, which will involve ramming the asteroid with a copper block at high speed (propelled by an explosive device) to dig up stuff that hopefully has not been weathered.

So there’s still lots to look forward to! Stay tuned. We are nowhere near done yet with this rock.