What complaints about cancel culture forget about real-life witch hunts

Cancel culture is everywhere, apparently. The internet and public discourse are often overrun with bad-faith dog whistles and endless cycles of whataboutism, but the current barrage of high-profile individuals bellowing from the rooftops that they are being censored by the evils of cancel culture has proven particularly irritating. What is most aggravating about this current glut of arguments — aside from the fact that nobody sees the irony in the most famous and influential writers on the planet complaining via major media outlets that their free speech is being impeded — is that the goalposts are constantly moving as to the very definition of cancel culture. Oh, calling out J.K. Rowling's dangerous and scientifically flawed transphobic rhetoric is cancel culture. Boycotts of exploitative companies forcing employees to go to work without protection during a pandemic is cancel culture. Negative reviews are cancel culture.

There's no rhyme or reason to a debate that is inherently skewed in its intentions, especially when the narrative is being pushed by those with all the power, money, and platforms. It's all just an excuse for ludicrous exaggerations in place of nuanced understanding of a real issue that's been twisted into yet another battering ram to silence the already marginalized. What that means is that we keep hearing the same arguments over and over again, all of which utilize the same vocabulary. You couldn't make a Mel Brooks movie or release Lolita today because of virtue-signaling (which overlooks the fact that Lolita barely got published in its time and was banned by many local authorities). Those oversensitive SJWs aren't prepared for the real world. If you ask me (says the billionaire), it's all a witch hunt.

Evoking the image of a witch hunt is a common tool in political and cultural discourse, and it's one that's been misused and appropriated way more than cancel culture. Every senator or president who's faced a modicum of criticism loves to invoke the idea that they are under siege in the exact same way that the women of Salem were hundreds of years ago. We seem to have forgotten that witch hunts were a very real thing and remain a black mark on our history, so thoroughly have we stripped the past of its context for petty uses and gotcha point-scoring.

The dictionary definition of a witch hunt is "an intensive effort to discover and expose disloyalty, subversion, dishonesty, or the like, usually based on slight, doubtful, or irrelevant evidence." Essentially, it's an unfounded attack against a perceived enemy, usually done in an attention-grabbing manner, with the intention of silencing dissenters under the cloak of uncovering dangerous or subversive activity. The term as we know it today has been in use for several decades, most well-known in its usage of events such as U.S. Senator Joseph McCarthy's House Un-American Activities Committee hearings, a supposed investigation into communist infiltration of American society that was widely slammed for destroying innocent people's lives. The McCarthy trials became indelibly connected to witch hunts in large part thanks to Arthur Miller's play The Crucible, which used the Salem witch trials as an allegory for McCarthyism and its baseless persecutions.

Witch hunts were an international concern — but when we talk about or invoke them, we're typically referencing the ones in early modern Europe or colonial-era America. Belief in witchcraft is a worldwide and millennia-old phenomenon, although much of what we associate with it today is still rooted in that bastardizing of puritanism and connection to the Christian devil. There were trials in the 15th and early 16th centuries of early modern Europe, but the trend died out widely until the 1600s, particularly under the rule of deeply pious and superstitious monarchs across the continent. King Christian IV of Denmark was a big fan of witch hunts and burning, and he would heavily influence James VI of Scotland and I of England. He became so obsessed with witches that he wrote his own manual on hunting them, called the Daemonologie. Between 1644 and 1647, hundreds of people were convicted and sentenced as witches thanks to the work of Matthew Hopkins, the self-styled Witchfinder General. Over the brief course of 14 months, Hopkins and his team sent to the gallows more accused people than all the other witch hunters in England of the previous 160 years.

Across the Atlantic in the early North American settlements, witch fever was also reaching a precipice, many decades before the incidents in Salem, Massachusetts. It is Salem, however, that sticks out in history because of its scale and the widespread mass hysteria it created. Over 200 people were accused of witchcraft in the space of 15 months. Of the 30 found guilty, 19 were executed, mostly by hanging. The majority of them were women. Salem made text the deep-seated implications of the witch hunt: Women were not to be trusted. They were inherently sinful, hysterical, troublemakers, and just plain wrong.

One of the most influential texts in witch hunting history was Malleus Maleficarum (usually translated as the Hammer of Witches), a treatise on the evils of witchcraft by the German churchman Heinrich Kramer that actively pushed for the extermination of witches as a legal and divine right. It is in this book that the image of witchcraft as a uniquely female evil was cemented. One chapter is even titled “Why is that Women are chiefly addicted to Evil superstitions?” Tracing the root of this problem back to Eve and that damn apple, Kramer insisted that women were the weaker sex and that made them more open to being seduced by the devil into acts of evil or just full-on sex. 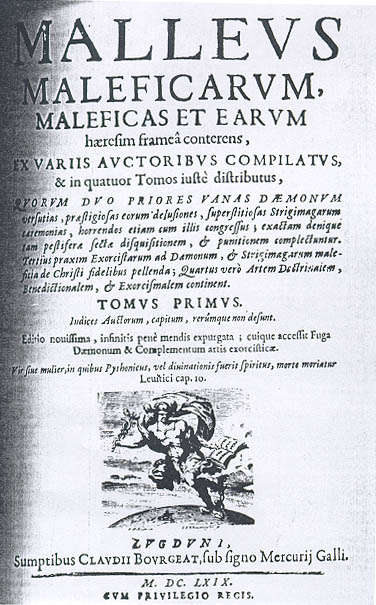 Malleus Maleficarum also set out appropriate procedures for identifying witches, a job they deemed most suitable for pre-existing religious and political powers. That meant that it was mostly men doing the hunting. The guide instructed hunts to single out women who were already scorned for their lack of societal conformity: Think single women, widows, those with education (especially midwives). Other "damning traits" included displays of ambition, a refusal to dress in a modest and feminine manner, and even swearing. A refusal to adhere to the stifling confines placed on women by a highly religious patriarchal society was not only to be condemned, it was to be destroyed.

This is something that modern-day blowhards insisting they are being attacked as part of a witch hunt don't seem to understand: Real witch hunts were tools of the powerful to attack the oppressed. They preyed upon superstition, manufactured paranoia, and plain and simple misogyny to encourage others to scapegoat marginalized individuals for all their problems. Senator McCarthy harnessed the post-World War II Red Scare panic to weed out not only communists but anyone with vaguely left-wing or pro-union stances, and to this day, workers organizing for their own rights is still tarred with that brush of the HUAC hearings. People lost their livelihoods, were ostracized by their families, friends, and communities, and some were even killed, all because it was easier to blame the powerless for the ills of the world than tackle the true root cause of our world's corruption. Shocker, it's not comparable to J.K. Rowling getting mad because she doesn't like her transphobia being labeled as transphobia.

Here's the thing: cancel culture is real on some level, but not in the way we see it being screeched about online. The same goes for our modern-day understanding of witch hunts. When, for example, a prominent multi-millionaire author threatens to sue a tiny website for describing her as having "deeply unpleasant views," that's not cancel culture because the power dynamic is so obviously twisted in favor of the one with all the clout. You can't cancel a multi-millionaire. Capitalism won't allow it. Witch hunts, too, cannot happen in political circumstances where the concepts of shame of accountability do not exist.

Before Brett Kavanaugh was confirmed as a new Supreme Court judge, he faced accusations of sexual assault. The Republican National Committee described this as a "witch hunt." Actors like Liam Neeson and Catherine Deneuve described the #MeToo reckoning Hollywood faced regarding systemic harassment and abuse as a witch hunt. Donald Trump's administration is a big fan of describing itself as the victim of a witch hunt (typically while scapegoating women like Hillary Clinton, Nancy Pelosi, and Alexandria Ocasio-Cortez for every drop of criticism he's ever faced). We've seen this pattern before, but what strikes me as peculiar is that I'm not sure a lot of these people understand that it wasn't the witches doing the hunting. One hilariously awful political cartoon from 2017 only proved that. Perhaps that's why the term has made such a comeback during the plague of faux concern for cancel culture. Now, it's the unruly and silenced voices who are speaking up, often at volumes, and with levels of visibility that cannot be ignored. These witches won't burn.

Why Samantha Stephens of Bewitched deserved a better husband