According to a paper authored by researchers from Middlesex University London in the UK and the Mathematical Science Research Institute in Berkeley, California, men are far less likely to wear a face mask during the current crisis than women. The study noted, "Men more than women agree that wearing a face-covering is shameful, not cool, a sign of weakness, and a stigma; and these gender differences also mediate gender differences intentions to wear a face covering." We've found ourselves in the utterly absurd position of having to convince a hell of a lot of people that wearing a mask, something that could save their lives and that of countless others, is "cool."

The New York Department of Health is way ahead of the game on that front, having released a set of guidelines on everything you needed to know about doing it during the pandemic but were afraid to ask. They suggest wearing "a face covering or mask" that covers your nose and mouth as "heavy breathing and panting" could spread COVID. They also kindly suggest that you and your partner(s) get "creative with sexual positions and physical barriers, like walls, that allow sexual contact while preventing close face to face contact." They advise against rimming for the time being. See, face masks can be safe, cool, AND kinky!

Of course, the history of the face mask is rooted in ideas of kink, subterfuge, illness, and classic mystery, with or without the threat of worldwide disease. For modern audiences, masks evoke images of heroes and villains, and mysterious romances in dazzling ballrooms. A masked hero or heroine can also be sexy as all hell.

Masks suggest intrigue. When you obscure a portion of someone's face, you immediately change their identity. It forces your eye to focus on specific parts of one's appearance: the sharpness of your jawline, your piercing gaze, the shape of your lips. Let's be honest: Would we care so much about Batman if his mask didn't perfectly show off that impeccably cut jaw you could break glass on? Masks also, mercifully, cover up your blemishes, a desire we've all gone through at least once in our lives. What a mask creates is a fantasy of the unknown, a promise of the unexpected, and just a hint of danger, under the right circumstances. There's the potential of discovery with that mystery, something you just don't get when your hero is wearing the full-on Rorschach sack.

The history of masks is almost as old as history itself but many of our current preconceptions about them originate from the practice of the masquerade. Dating back to Medieval times, the masquerade balls were part of Europe's carnival festivities: A series of public celebrations taking place during Shrovetide where good God-fearing Christians were encouraged to eat, drink, party, and basically revel in all the delights they were supposed to give up for Lent. The Masquerade included pageants, parades, and grand balls where attendees dressed in lavish costumes, with masks allowing them to express themselves more freely. Carnival was often a time of social upheaval and chaos, so many wore masks that deliberately evoked the grotesque, from elongated noses to exaggerated animal features. If the carnival celebrations were intended to free the mind and body from the constraints of the societal norm, then the masquerade was the perfect way for one to completely throw off their shackles and, to put it mildly, go f***ing bonkers.

Nowadays, we tend to associate masquerade balls with something a little more restrained and refined. Frankly, it's something that rich people like to do, from the ensemble of Gossip Girl to the legendary Black and White Ball thrown in 1966 by Truman Capote. There's a formality to our modern masquerade, which kind of sucks all the excitement out of it. You almost yearn for the days when the Red Death would crash the party and kill all your stuck-up guests, or when a masked murder-incel would demand you perform his musical fan-fiction. 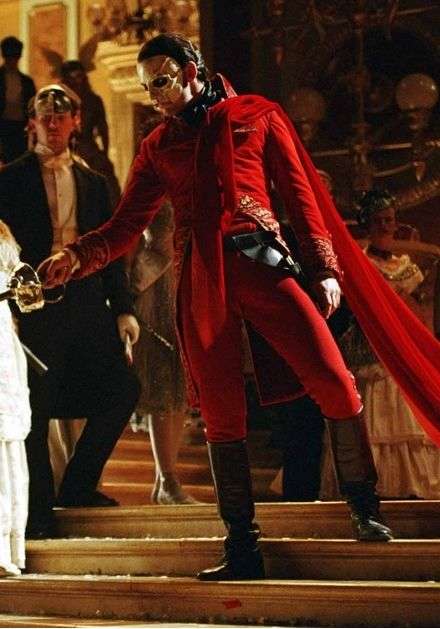 The wearing of masks is also frequently connected to notions of kink and fetish. Gas masks, full latex face-coverings, vacuum masks, Hannibal Lecter-style facial restraints… it's all about the confining nature, to be encased in something inherently restricting that often deprives one use of their senses. That's something a lot of us are dealing with right now as we try to get used to wearing face coverings when we dare to leave the house and do the things that used to be so mundane. There's a wonderfully villainous quality to something like a rubber gas mask and the way it changes not only your appearance but your voice (we see you, Darth Vader fans, and we respect it). There's also an undeniably bizarre element to a mask. Our faces are what make us so unique and distinguish us from one another, so removing that detail entirely leaves your brain in quite the scramble. You could be anyone and do anything, damn the consequences or opinions. Even if you don't feel like being wrapped up in latex, it's not hard to see why masks are such a common fetish.

Here's the thing, though: The masks we're all currently wearing probably aren't the first thing you associate with mystery or kink or parties (unless you have a medical fetish, and we think that's dope.) They make your face sweat, they yank at your ears, and if you're a glasses wearer then you have to get used to the endless steaminess of it all. It's weird and kind of depressing that we're now in a place where we have to convince dishearteningly large swaths of the population that wearing protective gear to stop a murderous pandemic from spreading further has become a necessary priority.

So here's my case. My friends, I know it's hard right now, but your mask? It's so hot right now. It really gets the juices flowing. Do you want to know what's the sexiest thing in the world today? Basic human decency and public display that you're willing to mildly inconvenience yourself in the name of ensuring the health and safety of millions of other people. I can't get enough of how you're prioritizing others' needs before your own with your awareness that, by wearing a mask, you're helping to protect those who don't have the luxury of being able to quarantine or work from home. You're such a stud.

It's a fan thing
Join SYFY Insider to get access to exclusive videos and interviews, breaking news, sweepstakes, and more!
Sign Up for Free
All Posts About
Fangrrls
masks
opinion
Related Stories

Baby Yoda to all-out steampunk, here are the coolest sci-fi face masks you can buy