So…Repress the overwhelming urge to sing while stealing shit… It's like a Magicians' musical episode all over again!

I just want to start off by saying that this episode is overwhelmingly special to me as I, along with John McNamara and Elle Lipson, was one of the three mad maestros that wrote it! Over the years, the idea for our musical episodes have grown exponentially from just a small tongue in cheek idea in Season 1 to our current full-fledged, belt from the rooftops productions, simply for the joy of it. (Thank John for that!) And I think I speak for all of us when I say, we need a little joy right now.

Even though these musical episodes have become wildly indulgent singalongs, we've refused to let these ideas veer away from our story. If anything, even though we'd add more and more music numbers, every year we've pushed harder and harder to build these concepts into the narrative. So the question out of the gate was always: How do we create an increasingly bigger musical without jeopardizing story?

The simple answer is the same as every other episode we've ever written. Character first.

But because we're Magicians, this time we set out to add an extra level of crazy on top of the crazy. A hat on a hat, if you will. We added a heist!

We had always wanted to adapt a version of the heist from the third Magicians book The Magician's Land and felt this was the perfect time to do so. Although we took liberties in adding the Empath Bellhop security systems (This may have come from a fever dream I had, had coming off anesthesia after an emergency medical procedure I went through at that time…) and brought back the emotion bottles to combat them.

To track all of our teams' intricate hijinks, one of the first things we did was create a map. It was finely crafted from a number of sheets of printer paper, scotch tape, and a bunch of labeled post it notes, with our "Characters" made out of bent paper clips and even more post it notes. It actually really helped us do what writers do best. Procrastinate!

But once the map was built and rearranged multiple times, it became instrumental in visualizing the movement of so many pieces throughout the Nave Hotel. This actually became somewhat of a foil for what was actually taking place in the episode so we were really able to get into the heads of Marina and Zelda as they moved everyone's pieces around with the conductor spell.

Of course our little map massively paled in comparison to the incredible Heist Book and Nave Hotel model made by our legendary Production Designer Margot Ready and Prop Master Dean Richards Wiancko along with their dedicated teams. Aside from the visual effects model unfolding from the Heist Book, the entire stationary model was practical. Every little detail you see is painstakingly real.

We'd frequently get lost peering into all the little hallways and rooms on set. The team truly went above and beyond. Although it was nerve wracking when we had to bring the model out on location to shoot the flashback's to Marina's original failed heist. This shoot was actually overlapped with a night of Episode 511, where our brilliant Director Meera Menon took over Marina's house from David Reed's direction while we were still in prep. The entire crew froze against the walls as the set decorating team cautiously carried the fragile model into the house like a giant cake on a British baking show.

While this was happening, the rest of our cast was back at the studio working with our wonderfully talented dance choreographer, Alyx Andrushuk. Alyx has not only been the choreographer for our musicals the past two seasons but she's also Trevor Einhorn's wife! Needless to say Trevor's many punishing slapstick stunts in this episode were Alyx's doing. In fact, everyone was so focused and excited for this season's musical that the entire cast brought their A-game. For the big number with Sir Effingham, they learned Alyx's complex choreography in a single day! Not to mention Sean Maguire doing the entire number over and over again in the excruciatingly hot Sir Effingham prosthetics. We had to make a special "cool down space" for him under a giant air conditioning vent to try to keep his airtight suit from filling with sweat.

One of the most incredible processes though was our time in the recording studio. A lot of our cast has been singing their entire lives and even have musical careers or aspirations beyond their screenwork. Yet, in seasons past some of our cast could be somewhat intimidated by the foray so far out of their comfort zone. But this year every single person came to the studio with such determination and passion that every performance was enough to bring you to tears.

From Jade, Summer, and Trevor belting punk power anthems to Olivia and Hale delivering the most intimate and heartfelt of performances. We seriously couldn't stop crying on set. Mageina Tovah even had the opportunity to lay down her tracks on the same LA recording stage that Sinatra, The Beach Boys, and The Rolling Stones once recorded in! For this being The Magicians' musical curtain call, this year's production was nothing short of pure joy and magic. Being a part of it has been the greatest honor and privilege of my life thus far and we'd like to thank each and every one of you for embracing and loving this as much as we do.

After all, they say music is the purest manifestation of feeling…

Don't miss the final episode of The Magicians Wednesday, April 1 at 10/9c 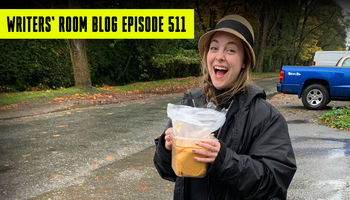