This episode deals with facing harsh truths and seeing how those truths are necessary in order to heal. We also start to ask ourselves if the aged idiom is true: when one door closes, does another one open?

After letting our imaginations run rampant for the first couple of episodes, one new door is the Dark King, whose identity has now been revealed! Fun fact – Sean Maguire, the actor portraying him, is ALSO Sir Effingham. We loved his work as Sir Effingham so much that we cast him twice. Here's what happened: during the process of casting the Dark King, we were struggling to find an actor we felt fit the role. But then our Casting Director, Carrie Audino, suggested Sean. Our first thought was, he's already playing Sir Effingham… But Carrie reminded us that no one can recognize his true identity with all those prosthetics. And just like that, we found our Dark King. We like to be efficient on The Magicians!

Speaking of efficiency, how about all those long-time-coming scenes between Eliot and Alice? We were really excited about sending them on a solo adventure together because, well, we had never really done so before. Also, actors Hale Appleman (Eliot) and Olivia Taylor Dudley (Alice) have always been such great friends and collaborators off-screen, so it was special for everyone involved to experience that chemistry really come to life on screen. In the Writers' room, there are always certain storylines we know are bound to be explored, but these also can't be rushed. In this case, there had been tension building between Eliot and Alice over the past few seasons, but it was not until now, with both of them needing to let go of Quentin in similar ways, that it made sense for us to deal with that tension head on.

We also have a wish list of index cards hanging in the Writers' Room with storylines we're eager to get the chance to tackle. Some are topics from the books we still haven't covered, others are about something wildly specific like: Fogg's autobiography wins a Hugo Award and some are as simply bonkers as NINJAS! Other fun cards worth noting are Jane Chatwin can only poop in a specific timeline and red demon with huge balls, which fans of Lev Grossman's The Magicians books will find familiar. We never will force a wish list item into an episode, but there are times when something on the wish list naturally fits, and it's a satisfying win for the room.

How about the Margo, Fen, Josh love triangle? Let's talk about how we got there in the Writers' Room. We knew four things we wanted going into this episode: 1) Margo to battle Fen in a knife fight and win. 2) Reveal that Margo feels guilty about being treated like a hero when she actually didn't send the letter that saved Josh and Fen. 3) Create a moment that would force Josh and Margo to define their relationship. 4) Reveal that Fen and Josh hooked up in the past.

So, we came to the conclusion that the way to hit all four beats was to reveal that Fen, like Josh, is a werewolf (a sexually transmitted curse in The Magicians multiverse). It is certainly a harsh truth for Margo to face, but one that allows her to reveal her own harsh truth to Josh and Fen. Which was all a part of the process, allowing for some new doors to creak open. 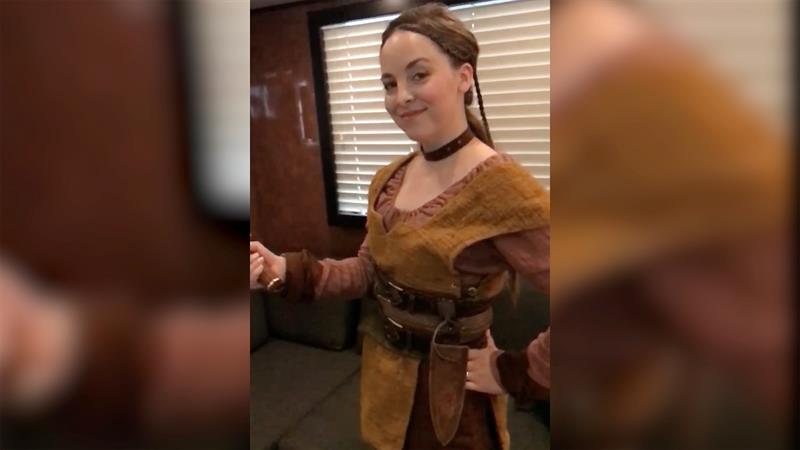 Tangent time – did you ever notice that Fen, played by Brittany Curran, looks eerily natural with those knives? If you have, there's a reason. If you haven't, take a closer look. It's because Brittany is so committed and badass that she literally carries plastic practice knives in her purse so she can practice at all times. However, she can't put them in her carry-on when she flies to Canada to film the show, so she has one set in the United States and one set in Canada. Brittany even tried to trick us into letting her take home the sharpened prop knives to prep for this episode (she did not succeed). It also gets the writers really jazzed up about writing a Fen knife fight when we know Brittany will likely be practicing in a park somewhere as she memorizes her lines. It's the little things that keep us going!

And with that, I leave you with, "Fen out, bitches!" Until we meet again - same time next week.